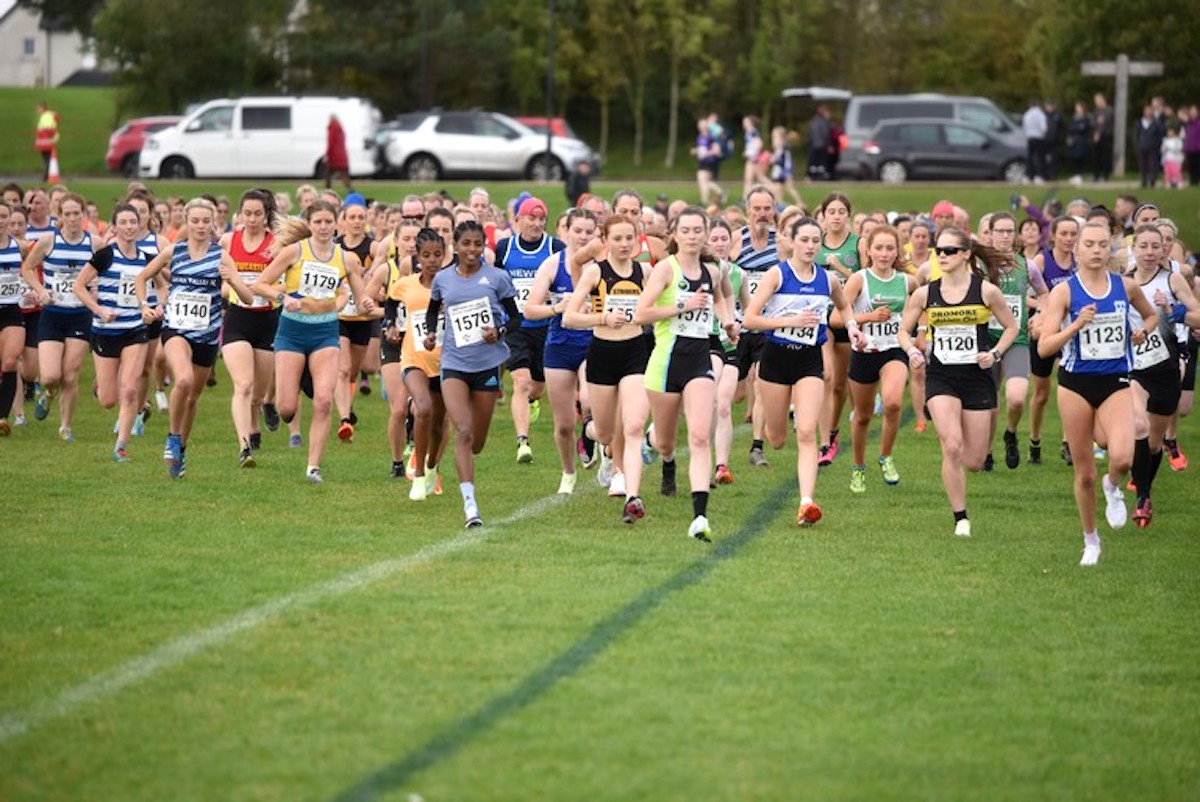 Another week and another outstanding performance by young Nick Griggs, this time on the cross country. Lindie Naughton reports.

Junior sensation Nick Griggs of Mid-Ulster AC, who is still only seventeen years of age, finished a sensational second in the men’s race at the Northern Ireland International Cross-Country and Bobby Rea Cross-Country, held at the Billy Neill Country Park, Dundonald on Saturday (October 22)

With only a handful of overseas runners, the field was dominated by local athletes. Eskander Turki, running for NI and Ulster as well as for his club Annadale Striders, was third in 25:32 and Finn McNally of North Belfast Harriers fourth in 25:45. First M35 was John Craig of Annadale Striders who was seventh in 26:18; Craig was also running for the NI and Ulster team. One place behind in eight place was Callum Morgan of CNDR Track Club who was first M20.

Winning the NI and Ulster U18 boys’ 5 km race in style was Seamus Robinson of City of Derry Spartans AC in 16 mins 45 secs.

Just one place behind McCann in fifth place was Nakita Burke of Letterkenny AC in 22:23, with Hannah Gilliland of Annadale Striders sixth in 22:28.

First W40 was Alison Stocks of Annadale Striders in 23:26, with former Irish international Kelly Neely of City of Lisburn AC just one place behind in 23:39. First U20 finisher was Amy Greene of Finn Valley 12th in 23:52.

Winning the U18 girl’s 4km race was Anna Gardiner of East Down AC in 15:20. A close second in 15:27 was Lucy Foster of Willowfield Harriers.

Racing in the rain

Vinny Connolly of Mullingar Harriers won the men’s 6km race with a time of 21:51. His clubmate Jack Moran was second in 22:00 and Liam Mulligan of Drogheda and District AC third in 22:05.

In the team competition, Sli Cualann AC packed well to take the title ahead of Mullingar Harriers and North East Runners, with fourteen teams entered. Big numbers with a map and compass

Just down the road on the same morning, the Leinster Orienteering Championships on Carlingford Mountain had attracted an impressive entry of over 200. From early morning, the rain had teemed down and the rock-strewn mountain, which provides challenging technical orienteering at the best of times, was wreathed in mist. Even some of the more experienced orienteers failed to finish their courses due to the poor visibility.

Making it a double for Kildare club CNOC in the elite senior classes were Ruairi Short and Niamh O’Boyle. Short took 100 mins 14 secs to complete the 11.4km men’s course which included 420m of climb and 23 control points.Second with a time of 106:26 was Dubliner Colm Moran of host club 3ROC.

O’Boyle, who was in a class of her own in the women’s elite race, ran the shorter distance of 7.3km with 360m climb and fifteen controls in 88 mins 6 secs. Former world masters mountain running champion Robin Bryson of FERMO was the winner of the M60 title. Three women had entered the W75 age group with Jean O’Neill of north county Dublin club FIN the winner. At the Munster Novice and U23 Cross-Country Championships held at Riverstick, also on Sunday (October 23), Oisin Murray of An Ríocht AC and Lucy Holmes of West Waterford AC took the titles.

In the men’s race, Matteo Mary of Waterford AC and James Tanner of Nenagh Olympic AC finished second and third with Mary also winning the U23 title. Leevale AC was a comfortable winner of the club title ahead of St Finbarr’s AC and Ennis TC. Cork was first of the county teams.

Holms took both novice and U23 women’s titles, with Roisin Howley of Kilmurry/Ibrick/N.Clare AC second and Siobhán Hoare of Togher AC in the novice category. Ennis TC was the winning team ahead of St Finbarr’s AC and Clonel AC. Clare was first county team. Michael Harty of East Cork AC has become the first Irish athlete over 40 years of age to break 30 minutes for 10km.

At the Leeds Abbey Dash in England on Sunday (October 23), Harty’s time of 29:42 for tenth place knocked 23 seconds off of the previous Irish record set by Brian Maher of Kilkenny City Harriers last June. In that race, Harty finished just one second behind Maher clocking a time of 30:06.

Although Harty wasn’t the first M40 – Graham Rush ran 29:31 for fourth overall – he was only 18 seconds behind the overall winner, Andrew Milligan, who recorded a time of 29:24.

Best of the Irish was Ben Branagh of St Malachy’s AC in Belfast who finished sixth in 29:32.

With the Dublin Marathon taking place next Sunday, only a handful of low-key road races took place locally over the weekend.

Winning the 10km at the Rebel Run 5km/10km in Bishopstown, Cork on Sunday (October 23) were Anthony Mannix in 33 min 2 secs and Claire McCarthy of Leevale AC in 36:45. At the prestigious Trofeo Vanoni in Morbegno, Italy, Sarah McCormack continued her excellent 2022 season of mountain running with a strong win in the women’s race. In just over 21 minutes of action the Irish international beat Italy’s Elisa Sortini by 10 seconds, with third placed Alice Gaggi (ITA) a minute and a half back.

The men’s race is a relay of three runners and an Irish A team of Aaron McGrady, Derek Crammond and Matthew McConnell finished 14th.

Barbara Cleary of Donore Harriers ran a time of 79:10 for third place at the Amsterdam Half Marathon on Sunday October 16. Cleary will turn fifty next April.

A week earlier Roisin Flanagan of Finn Valley AC clocked a time of 79 mins 36 secs.when finishing second in her debut half marathon in Boulder, Colorado on Sunday October 9.

Aoife Cooke’s time of 70:58 in Barcelona last April remains the fastest half marathon time by an Irish woman this year. Cooke is thirty-six.