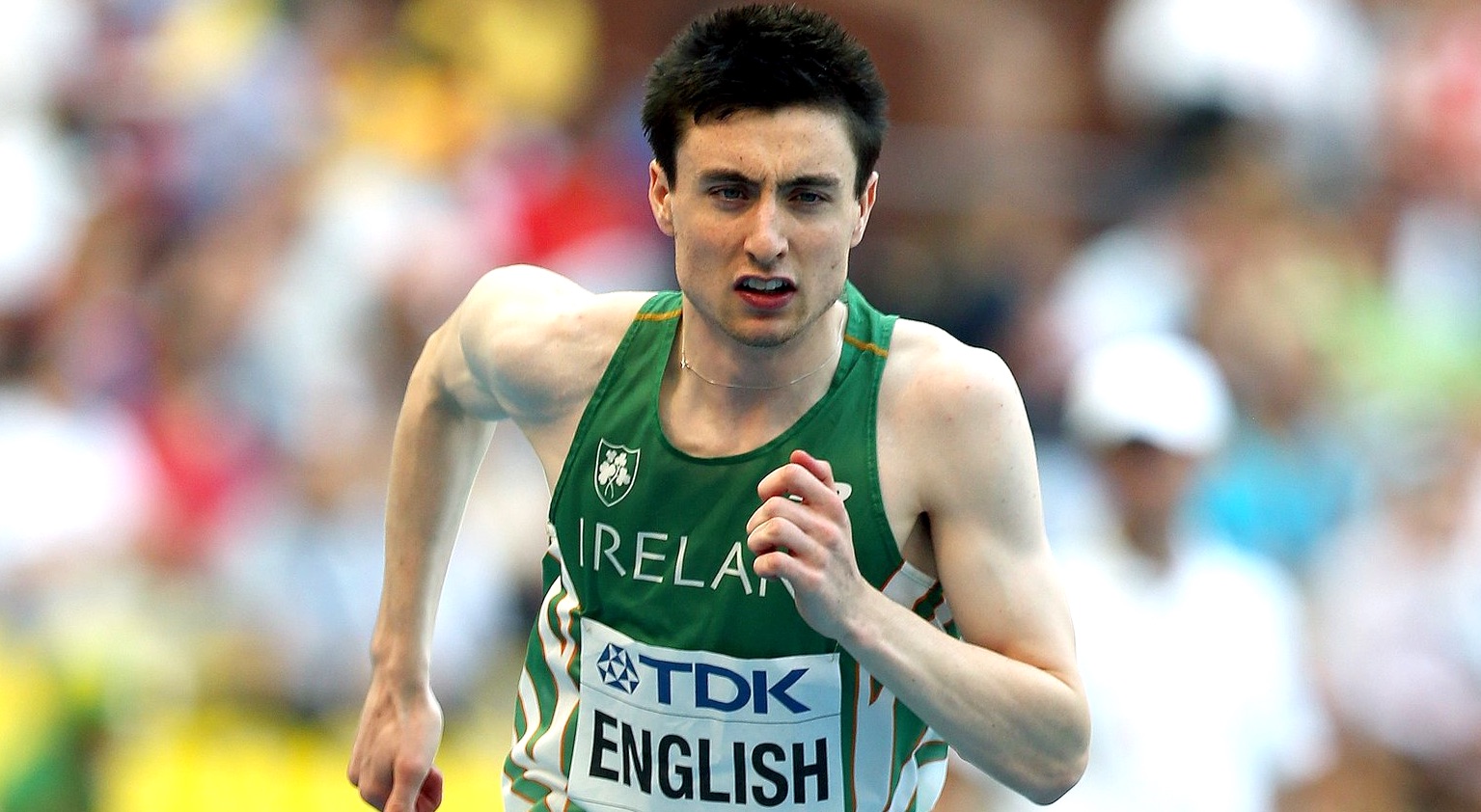 There was a standout performance over 800m, but action elsewhere of note for Irish athletes too. The Irish round-up for the weekend is here.

Mark English of UCD won the 800m in sensational style at the Birmingham Diamond League meeting on Sunday (August 18).

Only last Wednesday, English had dropped out of the 800m at the Cork City Sports and his chances of qualifying for next month’s World Championships were starting to look shaky.

But English came back with a bang in Birmingham going from eighth to first in the final 100m of the race and clocking a season’s best time of 1:45.94. That puts him 39th on the current rankings and with 48 places on offer for the World Championships, that should see him through safely. Second in the race was the Kenyan Alfred Kipketer in 1:46.10.

[Editor – If you have the time it’s well worth watching English’s finish on Youtube. Miles from contention until the last 100m and it’s almost like he just decides he’ll go win it. The looks of disbelief on Webb & Kipketer’s faces are brilliant and English commandingly takes the victory. A real joy to watch.]

Next up for English is the Morton Games in Santry on Wednesday evening (August 21). Also competing in Santry is Ciara Mageean, who has already qualified for Doha.

A night earlier, at the Flanders Cup meet in Belgium, Nadia Power, who is soon to transfer to Dublin City Harriers AC, won the women’s 800m in a personal best time of 2 mins 2.39 secs. In the 200m series, Leon Reid of Menapians AC finished second in his heat in 20.93 secs, while in the 400m hurdles, Jason Harvey of Crusaders AC was third in 52.09 secs.

In the women’s 800m, Nadia Power of Templeogue AC finished fifth in 2:03.19 in the women’s 800m. Luvo Manyonga, the current world champion, won the long jump with a stadium record of 8.20; his lifetime best is 8.65 m. Pippa Rogan finished fourth and Sommer Lecky fifth in the high jump both getting over 1.80. Tommy Hughes of Termoneeny in Co Derry, who has transferred to Dublin club Rathfarnham WSAF AC, was the winner of the men’s over 50 5000m race at the National Masters Track and Field Championships in rain-sodden Tullamore on Sunday (August 18). Hughes, who turns 60 next January, headed the race from the start and finished ahead of Tommy Payne of Tinryland AC and Ian O’Leary of Leevale AC.

Moving down from his favoured 800m distance was many times world champion Joe Gough of West Waterford AC, who won the M65 200m in 29.23 secs.

There should be more results available on the Athletics Ireland website.

Clonliffe’s Ian Guiden proved the class of the field at the Fr Mulligan 5km in Dundalk on Saturday (August 18) winning in 15 mins 5 secs. A distant second in 17:54 was Shane Larkin of Drogheda and District. First woman was Josephine Killeen in 21:24.

At the Rathkenny 5km in Co Meath on Friday evening (August 16) , Ben Brunton of St Brigid’s AC was the winner in 16 minutes exactly with Shauna Moran of Dunshaughlin AN first woman in 19 mins 47 secs. Star of the Sea AC was first of the women’s club teams, with Dunshaughlin AC best of the men.

Hiko Tonosa of Dundrum South Dublin AC was the clear winner of the Castlepollard 5km on Wednesday (August 16) in a time of 14 mins 49 secs. Second and first M35 was Brian O’Kelly of Crusaders AC in 15:06 while third was Ronan Maguire of OMG AC in 15:27.

First woman as Leevale’s Sinead O’Connor in 16:50. Siobhan O’Doherty of Borrisokane AC was second in 17:11 and Mary Mulhare of Portlaoise AC third in 17:21. The race was the eighth round of the KIA Series, with only the Lakes 10km in Blessington on September 7 to come.

With the five best results counting, Mary Mulhare currently tops the women’s rankings with three wins , a second and a third for eight points. Also on eight points with two wins and three seconds is Sinead O’Connor.

With five wins from six races, Tonosa is uncatchable in the men’s competition; as indeed he was last year when the fact that he didn’t have a driver’s license meant he could not take on the 12-month lease of a car that went to the overall winner.

Winners at the Musgrave S& BHAA 5km in Cork on Tuesday (August 13) were Alan O’Shea of Mercy Hospital and Carol Finn of Finn Physiotherapy.

O’Shea finished in 15 mins 10 secs, with Alan O’Brien of McCarthy Insurance Group four seconds behind for second and Joe Cunningham of Eli Lilly third and first M45 in 15:18. Finn clocked 18 mins 1 sec; Clare O’Brien of Department of Education was second in 18:30 and with Niamh Roe third in 18.49.

Department of Education was first team in women’s grade A, with HSE best in B and Musgrave in C. UCC was first team in men’s grade A ahead of Eli Lilly; Stryker were clear winners of B while PM Group won C. A total of 478 completed the race. Next Cork BHAA race is the Cork to Cobh 15 mile on Sunday October 9 for which online registration is opening soon.