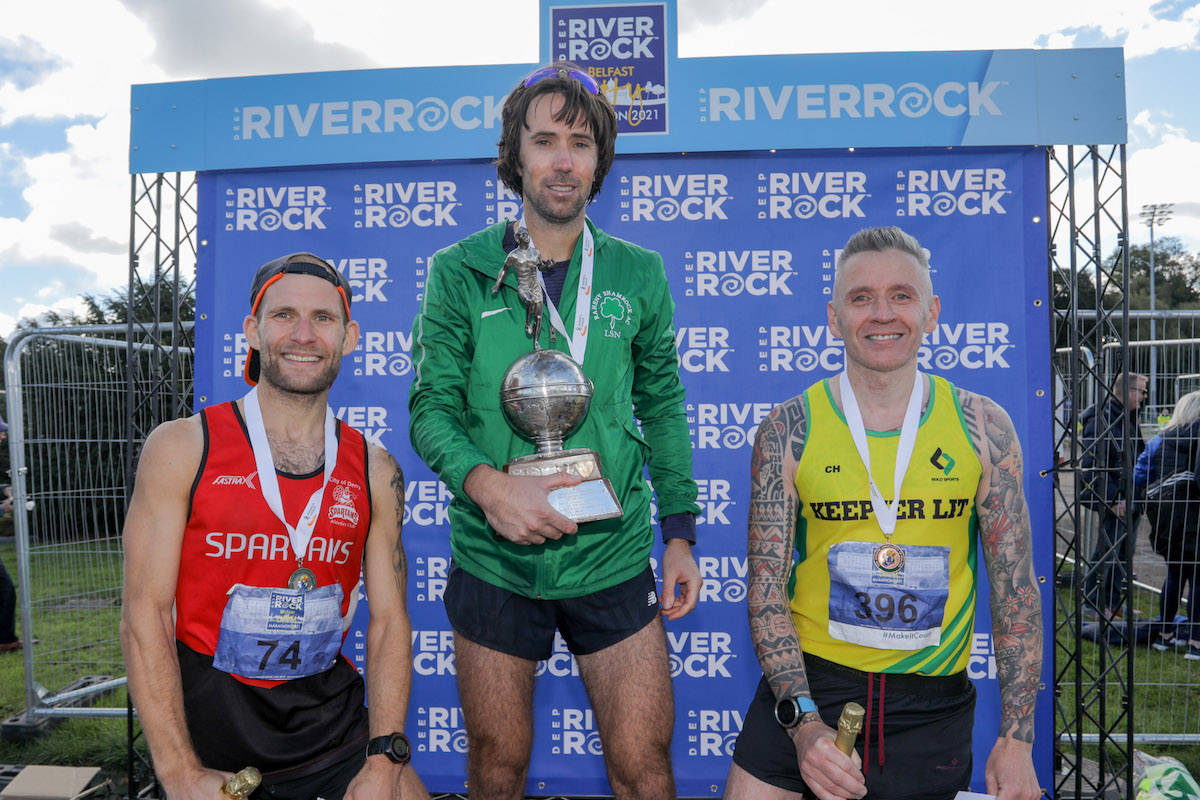 Mick Clohisey of Raheny Shamrock AC and Fionnuala Ross of Armagh AC were the winners of the National Marathon run in conjunction with the Belfast City Marathon on Sunday morning (October 3).

Armagh AC’s Ross finished ina time of 2:43.43, pushed for much of the way by Ciara Hickey of Brothers Pearse AC and Gladys Ganiel of North Belfast Harriers who finished second and third in 2:44.40 and 2:45.03 respectively.

Irish talent at the London Marathon

In London, Sinead Diver from Belmullet in Co Mayo finished 12th woman at the London Marathon in a time of 2:27.16. Diver, a late starter to athletics who opted to run for her adopted nation of Australia when rejected by the Irish selectors, has been a London “regular”, for the past four years. Her best time of 2:24.11 — her career best time — came in 2019 when she finished 7th. At the Tokyo Olympics last August, Diver finished tenth in 2:36.14 despite the swelteringly hot conditions.

Finishing 11th in the wheelchair race with a time of 1:35.58 was Patrick Monahan of Le Cheile AC in Co Kildare.

Galway Bay Marathon not to be missed either

At the Galway Bay Marathon a day earlier on Saturday (October 2), Andrew O’Neill was the winner in 2:36.20. First woman in 3:21.47 was Dolores Duffy of Watergrasshill AC, who was also first W50.

In the associated half marathon, Greg Lundon of South Galway AC and Grainne Ni Uallachain of Galway City Harriers were the winners. Their times were 78:44 and 84:07.

Winner of the 10km was Jake O’Regan of St John’s Clare AC in 29:32. O’Regan was pushed hard by Sergiu Ciobanu of Clonliffe Harriers who finished second in 29:49 First woman was Edel Gaffney from Trim AC in 36:46. Siobhan O’Doherty of Borrisokane AC was second in 38:15. At the National Road Relays, held in autumn this year rather than on its usual spring date, host club Raheny Shamrock won three of the four main titles.

First to race were the master women, where Newbridge AC led Raheny’s Zoe Quinn after the opening one mile leg. Previous champions Finn Valley AC took over in front on the second leg of two miles, with Kate Purcell holding on to second for Raheny.

Anchoring the teams was Sarah Quigley who raced into the elad and then held on for victory on the final one mile leg. Finn Valley held on for second place with Donore Harriers, anchored by Florence Curley, third. Raheny also won the W50 title, with Adrienne Atkins, Patricia O Cleirigh and Annette Kealy making up the team.

Next up were the senior women where Siobhan Eviston made a brilliant start for Raheny on the opening mile leg. Her lead was consolidated by Niamh Kearney on the middle two-mile leg. Lucy Barrett then brought the team home on the final mile holding off the challenge of a strong Dublin City Harriers trio anchored by 800m international athlete Nadia Power. Finishing third was Rathfarnham WSAF AC. It was a first win since 2010 for the Raheny women.

For the senior men’s race, the teams of four started with a two-mile leg, followed by one mile, then three miles and then a final mile.

Mitchell Byrne gave Rathfarnham WSAF an early lead on the first mile of the opening two-mile leg although Cillian Kirwan of Raheny had caught him by the changeover, with Jonny Whan of Clonliffe Harriers in third place. Gavin Eccles set off on the one mile lap with a five second lead and hung on to hand over to Kieran Kelly who stretched the Raheny lead to 40 seconds on the three-mile leg.

It was left to Daniel Stone to bring the team home giving Raheny a fifth consecutive victory in this race. Behind him 2012 Olympian Mark Kenneally, making a comeback in Clonliffe colours, overhauled Rathfarnham WSAF to give his team the silver medals. In a well spread out field, O’Donoghue, who finished in 32 mins 29 secs had a notable win over Ryan Creech of Leevale AC who finished in 33:10 and Liam Harris of Togher AC with a time of 34.11.

Leevale with all four runners finishing in the top seven, were clear winners of the team title ahead of East Cork AC and Togher AC. Sarah Clarke of Na Fianna AC was first of the women at the Meath Novice Cross-Country Championships on Saturday (October 2).

Winner of the men’s novice title was Eoin Smyth of Tara AC, with Aaron Getty of St Brigid’s AC second and Adam Caning of Rathkenny AC third Trim AC, led by Ronan Moore in fourth place, were first team ahead of Bohermeen AC and Navan AC.

Winning the U18/ junior races were Aaron Smith of Cilles AC and Ava Costello of Trim AC.

Fearghal Curtin of Youghal AC finished second in the men’s 8km at the Chanticleer Challenge in Conway, South Carolina, on Friday (October 1) Curtin’s time saw him finish a minute behind race winner Athanas Kiokoa who won in 23:28.5; Curtin’s time was of 24:42.2. He was leading his new college Charleston Southern to a solid team victory, with six finishers in the top eight.

At the DII Pre-National Invite in St Leo, Florida on Saturday (October 2), Faye Dervan of Tallaght AC representing host college St Leo, finished second in the women’s 6km with a time of 21:33. Aoife Mahoney from Listowel was 29th in 23:57. In the men’s 8km, Shane Bracken of Swinford AC finished seventh in 25:01.

In Louisville Kentucky on Saturday (October 2), Eric Keogh of Donore Harriers finished 50th in 24:24.5 for Queen’s University Charlotte North Carolina, where he is a freshman this season. A week earlier, Keogh had finished third in a local cross-country race, also over 8km, in Charlotte.

Also on Friday, Barry Keane finished tenth in the men’s Blue 5-Mile 8km at the Joe Piane Invitational, in South Bend,Indiana. Keane was leading his team Butler to third place in the race.

In the women’s open 5km Sophie O’Sullivan of Ballimore Cobh AC and the University Washington, returning from injury, finished 18th in 17:52.2.