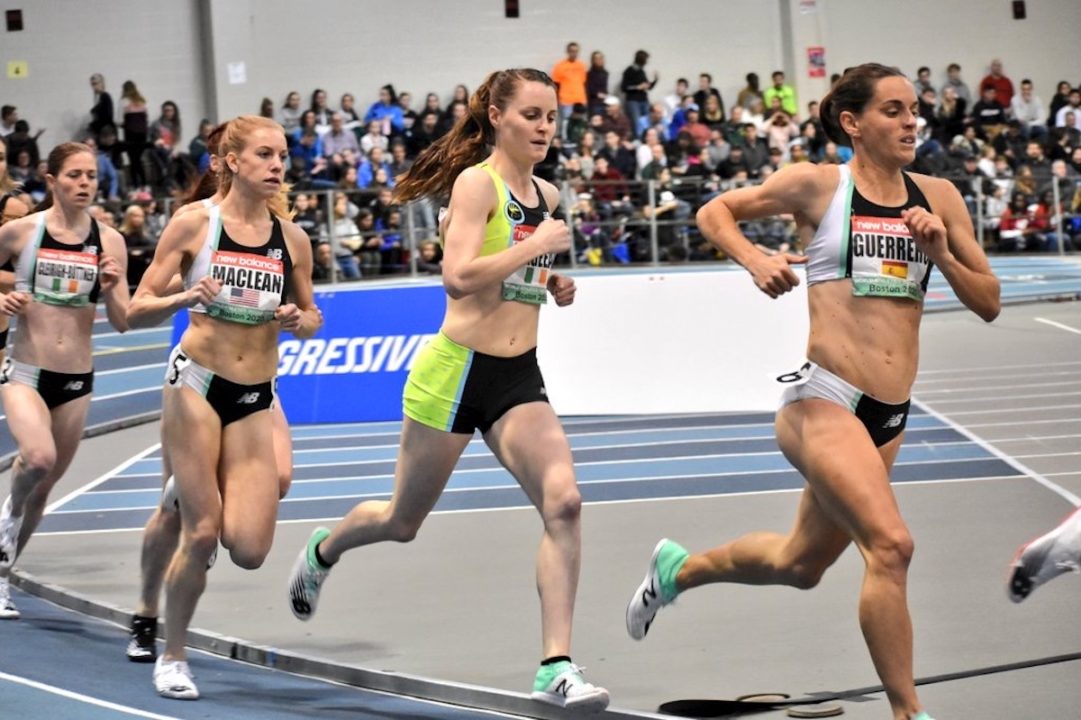 From the cross country to the roads, with indoor track featuring too, Irish athletes in action across the globe. Lindie Naughton reports on the action.

Ciara Mageean got her 2020 season off to a good start when she improved on her own Irish 1500m indoor record at the World Athletics Indoor Tour in Boston on Saturday (January 25) .

In her first race after a block of altitude training in Albuqueque, Mageean ran a time of 4 mins 06.42 secs for third place after moving up from fifth in the final 100m. Race winner was the Australian Jessica Hull in 4:04.14 with Germany’s Konstanze Klosterhalfen second in 4:04.38.

Next up for Mageean is the Athlone International Grand Prix on Wednesday February 12, followed the World Athletics Indoor Tour in Madrid on February 21 and the National Track and Field Championships in Abbotstown at the end of February. With the Tokyo Olympics her top priority, she has no plans to run the World Indoors in China.

Andrew Coscoran of the Dublin Track Club joined the sub-4 minute mile club in Boston this weekend. The Irish youngster battled all the way to the line with American Craig Engels, a former Nike Oregon Project athlete, and Coscoran posted 3:56.85, the exact same time as the US World 1500m finalist at the 2020 BU John Thomas Terrier Classic.

It’s the first sub 4 minute mile under the Dublin Track Club project and just shows the exciting performances coming from the group. We look forward to seeing more action in the future from the DTC. What a thriller the Raheny 5 mile on Sunday (January 26) proved to be with just 41 seconds separating the top ten men and Hiko Tonosa only winning in a sprint for the line.

Given the same time was Efrem Gidey of Clonliffe Harriers who finished fourth and first junior. Yared Derese of Carrick Aces was fifth and Kevin Dooney of host club Raheny Shamrock AC sixth. His clubmate Mick Clohisey, the defending champion, could only manage ninth place despite a very respectable time of 23:16.

Not quite as exciting was the women’s race although it still provided a battle to the line between Fionnuala McCormack of Kilcoole AC and defending champion Annemarie McGlynn from Letterkenny AC with McCormack taking the win in 25: 55 and McGlynn second in 26:00. Ciara Hickey of Brothers Pearse AC was third in 26:50.

Record numbered signed up for the team categories, with over 70 teams in both men and women’s senior, and over 50 in both over 40 age groups. Having a great outing was Dundrum South Dublin with three wins- senior men and women and over 40 women. Winning the men’s over 40 grade was North Belfast Harriers. National champion Mark McKinstry of North Belfast Harriers continued his domination of masters cross-country in Ireland when he won the men’s masters race at the Northern Ireland and Ulster Intermediate and Masters’ Cross-Country Championships held in Gosford Forest Park on Saturday (January 25).

Taking the M65 title was Terry Eakin of North Down AC; Martin Kerr of Milford AC was second and Paul Spick, unattached, third.

Winner of the intermediate women’s title was Sarah Kelly of Inishowen AC. Natalie Hall of Armagh AC was second and Mari Troeng of Newcastle AC third. Finn Valley was first team ahead of Armagh AC and Lagan Valley AC.