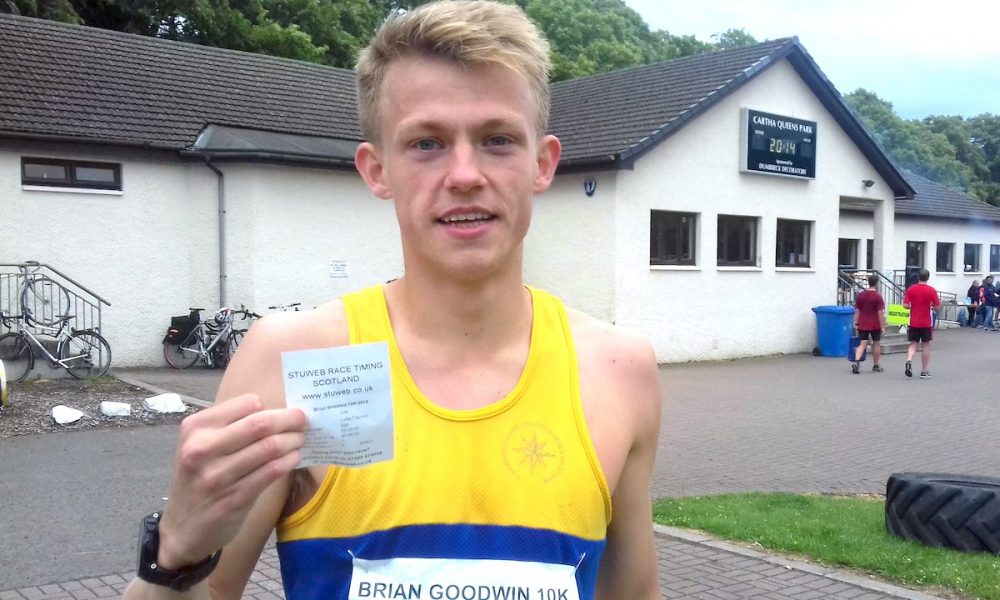 The 24 year-old runs the third fastest ever 10k by a Scot, the first Summer Speedway 10k produces fast times as did races in Eastleigh, Freckleton, Richmond, Barrowford and Guernsey.

The Podium 5k races on Friday evening were as red hot as usual, with Richard Allen breaking the men’s course record in 14:05, and Mhairi Maclennan running a big PB to win the women’s race. A report from the action in Barrowford can be found here.

At parkrun, Chris Olley ran the third fastest time across the UK this year with a 14:17 run at the Pegwell Bay event, and you can read his run and the top times this week at parkrun here.

GB international Luke Traynor laid down the gauntlet to the rest of the British elite distance runners when he ran a superb 28:32 on Friday evening to break the course record at the Brian Goodwin Memorial 10k in Scotland.

Traynor’s winning time was the third fastest ever by a Scot, only bettered by Allister Hutton and Andy Butchart.

Corstorphine AAC’s Calum McKenzie 30:49 would normally have been enough to easily win any 10k road race in the UK, but the Giffnock North athlete put paid to that with his world-class performance on the fast and flat course.

There was a fierce fight for the final podium position between Inverclyde’s John Bell (31:21) and Cambuslang Harriers’ Fraser Stewart (31:22) with just a second separating the pair.

Inverness’s Jenny Bannerman won her title back from the 2015 edition when she broke the course record in 35:08, just one second shy of her 2017 PB, while second placed Kilbarchan AAC’s Elspeth Curran also dipped under the old course record with a 35:25 clocking. Edinburgh AC’s Lauren Wilson was third in 37:25, running well to maintain her position ahead of club mate Katie Bain, who was never far behind in 37:52.

Cardiff’s Matt Clowes ran a solo 30:19 to win his third 10k of the year in the first ever running of this Chepstow race. Organiser James Blore had set out to attract as many fast runners to the event, keen to encourage a competitive race for those wanting a stripped back racing experience.

Clowes was followed home by Bideford AC’s Shaun Antell in 31:17, with Antell’s club mates Aaron Richmond and Mark Jenkin claiming the next two spots in third and fourth with times of 31:25 and 31:26 respectively, clearly highlighting Blore’s success in creating a competitive environment for fast runners.

Chepstow athlete Katherine Matthews was a clear winner of the women’s race in 37:17, with the V40 Gwent cross country league champion doing well to beat to Fife AC’s Helen Sharpe, who holds a 35:40 PB from 2014 but ran 37:46 on the Beachley course on Sunday morning. As predicted, Parc Bryn Bach’s Lauren Cooper made it onto the podium when her 38:40 earned her the third prize.

Although the official results were unavailable at the time of going ‘to press’, the winners were confirmed as Blackburn’s Victoria Mousley and Gala Harriers’ Darrell Hastie.

John Beattie won an extremely a tight battle for the title when he held off Crawley’s James Westlake by just four seconds, crossing the line in a classy 30:29 to Westlake’s 30:33. Southampton’s Aiden Lennan may have been 90 seconds adrift in third with his 32:04 clocking but it was nevertheless a PB for the 2018 Southampton half marathon title holder.

Lennan’s club mate Jen Elkins proved her impressive consistency by posting her second sub-35 result this year when claiming victory in 34:52. Elkins was well ahead of her nearest rival, but Fleet & Crookham’s Helen Cozens ran her fastest ever 10k when she finished in 36:47, as did third placed Emma Jolley from City of Portsmouth AC, who posted a 37:03 result.

Ryan Burling and Ulrike Maisch, who won the women’s marathon at the 2006 European Championships, but now lives in Guernsey, won the island half marathon.

Fantastic win and 2nd fastest ever time I’ve ran in the Guernsey ‘Milk Run’ half marathon in 67.51. So happy to start the next big block of training with a solid performance. The buildup for autumn starts now… 🏃🇬🇬🎉 @BBCGuernsey @islandfm @ITVChannelSport @GsyAthletics pic.twitter.com/XHRkTXSmhd

This Lancashire half produced some sizzling performances on an otherwise grey, cool June morning. Border’s John Mason smashed his three year-old PB of 69:46 when he won the race of his life in 67:19, 38 seconds clear of Blackburn Harriers’ 65min half marathoner Ben Fish, who ran 67:57 for second place.

The women’s race was a similarly competitive affair, with the top three separated by less than 90 seconds. Southport Waterloo AC’s Tracey Allan was the first across the line in 91:53, with Jess Kennedy and Jenny Pilling never far behind in 92:46 and 93:16 respectively.

Clapham Chasers’ Steph Davis clinched her fourth road race victory of the year so far when she ran 35:41 to win this highly competitive South West London event ahead of Basildon’s Emma Houchell, who ran a 35:56 PB to take second place. Italy and Serpentine AC’s Marta Bagnati also ran her fastest 10k when she clocked 36:37 for third.

The men’s race saw a clear win for Epsom & Ewell’s Ollie Garrod, who crossed the line in a PB 31:54, while Woking’s Ben Goddard’s 33:05 was also a PB in second. V35 Steve Woolley was only seconds off his lifetime best when he clocked a 33:29 result in third.