Lavin the star of the show – Irish round-up 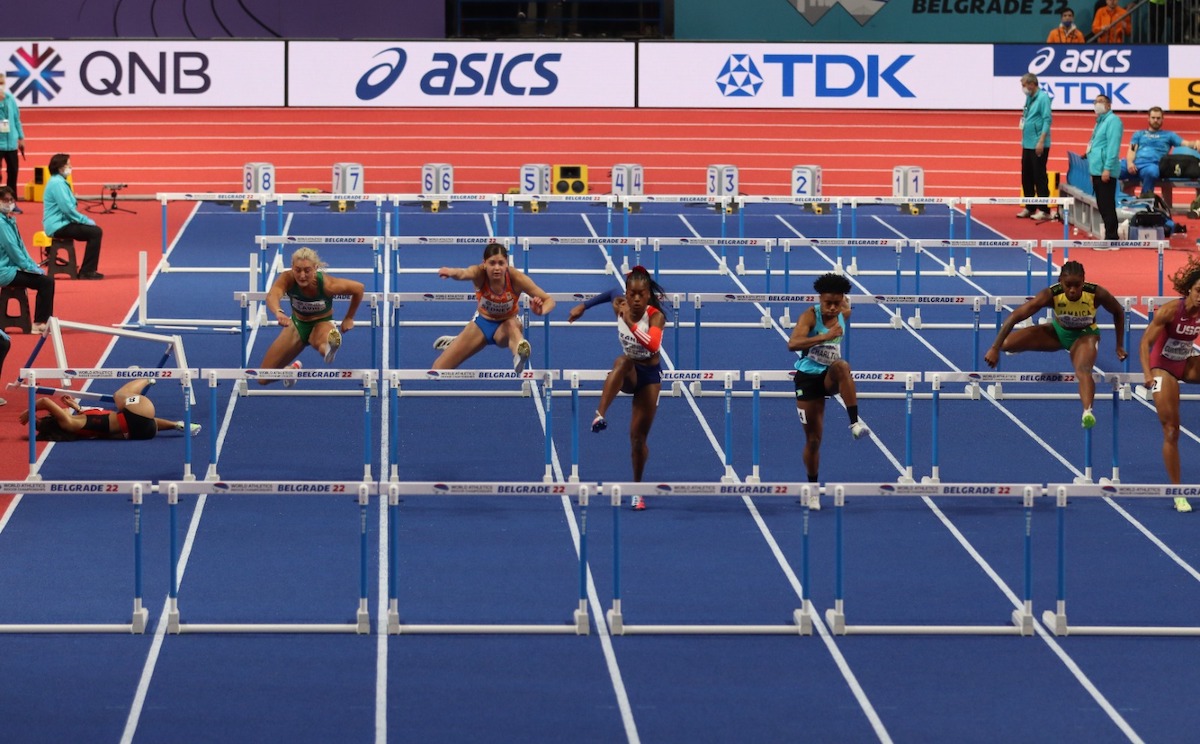 Lindie Naughton brings the action from the World Indoors and a whole bunch of race racing too.

In his strongest run for some time, former Irish marathon champion Sergiu Ciobanu of Clonliffe Harriers was the runaway winner of the Mallow 10-Mile on Sunday (March 20 ).

Ciobanu’s time of 50 mins 56 secs put him over two minutes clear of John Kinsalla of Bilboa AC who finished second and first M40 in 53:08. Third in 53:13 was Derek Griffin.

Finishing eighth overall and first woman was Michelle Finn in 55:09. Finn’s Leevale AC clubmate Niamh Moore was second in 58:54 and Emma Murphy third in 61:50. A total of 962 completed this popular race.

Second in 34:14 was David Rooney of Raheny Shamrock AC, while third and first M40 was Paul Dempsey of Crusaders AC in 36:38. Jill Horan of the D&J Running Club was first woman in 41:45.

The race incorporated the Dublin 10km Championships, where the first team was Raheny Shamrock with three finishers in the top nine.

Also on Sunday, the annual St Patrick’s Festival 5km, organised by the Metro St Brigid’s club, moved from Dublin’s city centre to the Abbotstown sports campus, which is close to MSB’s home territory.

Winners of the 5km were Sean Doran of Clonliffe Harriers in 16 mins 25 secs and Ruth Kennedy of Gowran AC in 19:16. Louis Woodger of host club MSB won the junior 3.5km, while Eva Crowe led home an entry of 125 — the largest of the day — in the family 1.5km.

On a busy Sunday with races all over the country, Aaron Brennan was a decisive winner of the Craughwell 10-Mile in Co Galway with a time of 52:47. Second and first M40 was Paddy O’Toole of Westport AC in 56:21. First woman was Neasa De Burca of Galway City Harriers in 62:20.

Winning the associated 10km in 32 mins 55 secs was Brian Conroy of Clane AC (and Pop-Up Races). Kathryn Casserly of Galway City Harriers was first woman in 39:09.

The streets of Portlaoise

Sean Tobin of Clonmel AC and Aoife Cooke of Eagle AC made it a Munster double at the Streets of Portlaoise 5km, held on St Patrick’s Day (Thursday March 17), which proved the quality race of the past week.

Cooke was first woman in 15: 54, with Ann-Marie McGlynn of Letterkenny AC second and first W40 in 16:00, and Aoife Kilgallon of Sligo AC third in 16:18. First junior and eighth woman in 17:13 was Irish international Emma McEvoy of Dundrum South Dublin AC.

Had there been a team award (maybe there was?) , it would undoubtedly have gone to Leevale AC, with Sinead O’Connor, Lizzie Lee and Jessica Coyne, finishing fourth, fifth and sixth. Equally prominent overall was Clonmel AC with Evan Fitzgerald seventh and David Mansfield ninth.

Both winning times were course records.

A total of 551 completed this opening round of the Kia Race Series, which is back after an absence of two years. Next round is the Streets of Kilkenny 5km on the evening of Thursday, April 14. There are seven races in all.

Stephen Conroy of Celbridge AC was the winner of the Mullingar Half Marathon. His time was 70 min 38 secs. First woman was Elizabeth Carr in 79:56.

Sarahjane Cooke of Victoria Park and Connswater AC was first woman and first W40 in 59:25. Karen Alexander of Christian Runners UK was second in 63:45 and Sharon Leetch of Ballymena Runners third in 63:54.

Sarah Lavin of Emerald AC, who is in the form of her life, proved the star of the Irish team at the World indoors Championships in Belgrade, Serbia over the weekend, when she made it through to the final of the women’s 60 m hurdles.

After running a PB 8.03secs in the heats, Lavin improved that time to 7.98 secs — at last achieving her ambition of breaking eight seconds — in the semi-final. In the final, she finished a close seventh in 8.09 secs.

Overall, it was the sprinters who shone for Team Ireland. Phil Healy of Bandon AC won her 400m heat to progress to the semi-finals where she finished sixth, while Molly Scott from StLOT AC, another athlete in top form at the moment, made it to the 60m semi-finals, where she finished seventh. Both men and women’s 4 x 400m teams set Irish indoor records.

Best middle distance result came from Andrew Coscoran from Star of the Sea AC; he finished a fighting fifth in his 1500m heat in 3:40.53. In his debut at this level, Darragh McElhinney of UCD AC ended up eighth in the 3000m with a time of 8:06.31.

Middle distance highlight at the opening day of the National Juvenile Indoors in Abbotstown on Saturday (March 19) was a new championships best time of 4:33.64 for Kirsti Charlotte Foster of Willowfield Harriers in the U18 girls’ 1500m. Foster knocked five seconds off Nadia Power’s 2015 record of 4:38.65.

Johnston finished the demanding ten-mile (-ish) course in 74 mins 58 secs, with his club-mates Jonny Scott and Adam Cunningham second and third in times of 75:38 and 75:50 respectively. Sixth and first M40 was Jonny Steede of Glens Runners in 80:01. First M60 was Jim Brown of BARF NI.

Winning the Wicklow Way “Half” (22 km), from Lough Tay to Crone Woods and back was Barry McEvoy in 93 mins 30 secs. John Kinsella of Bilboa AC was second in 97:14 and Enda Cloake of Slaney Olympic third on 97:43.