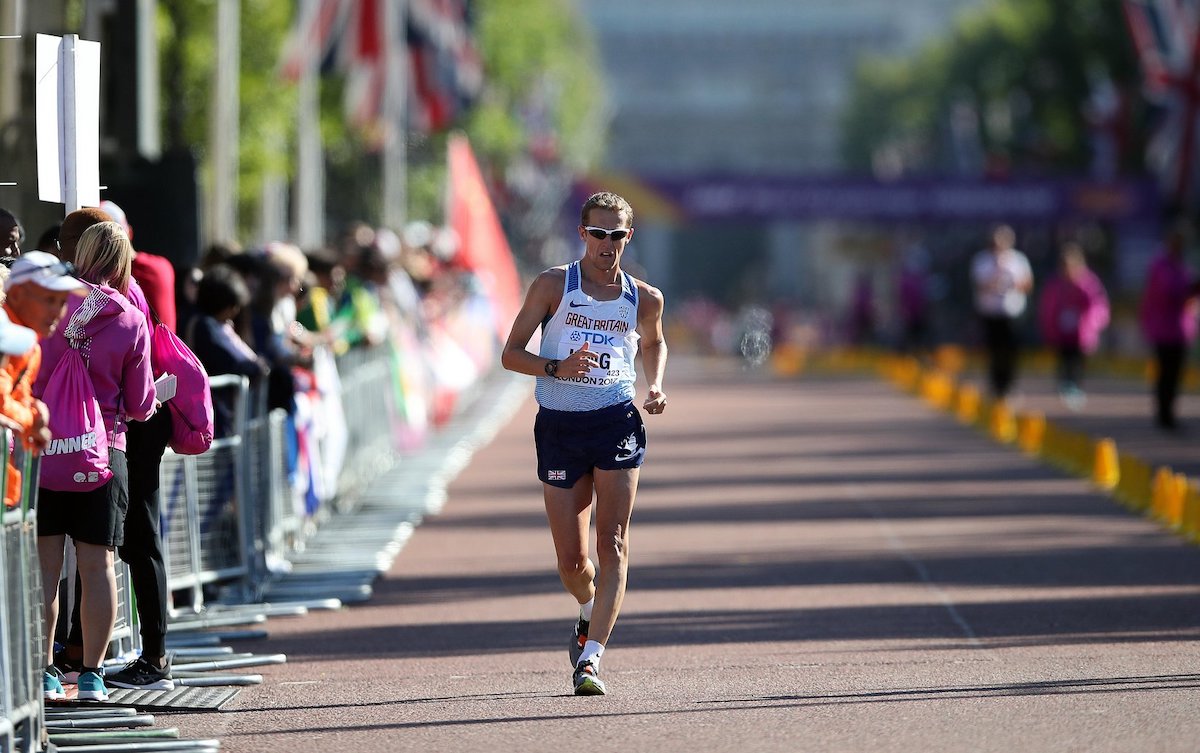 It’s a funny time for athletics at the moment. The indoor season has concluded, the outdoor season hasn’t yet started, and COVID has wreaked havoc on the usual flurry of spring road races. However, there is grounds for cautious optimism, particularly with athletics competition restarting in England in ten days.

That’s not to say there is nothing to talk about. In fact quite the opposite with this weekend witnessing a World Record and British Record in the race walks. I can’t claim to be a fountain of knowledge on race walking, but it has certainly been a weekend where the walkers have taken centre stage.

Saturday saw the 40th anniversary edition of the Dundiska 50 in Dundince, Slovakia. Incorporating 20km, 35km and 50km distances for the men, and 10km and 20km for the women, it provided an opportunity for athletes both to compete in a period sparse of racing, but also to chase Olympic qualifying times four months before Tokyo.

British interest came in the form of trio Cameron Corbishley, Dominic King and Daniel King, all going in the 50km race, with their sights on getting below the 3:50 Olympic qualifier. For context, Chris Maddock’s British Record is 3.51:37. This was set in 1990. It is older than me, and a sign of the challenge ahead. The trio went through 10km with a large group in 46:30, before Cameron put in a burst of pace to reach 20km in 1.31:38, inside Olympic Q (and British Record pace), with Dominic and Daniel about 50 seconds behind.

Cameron did not take his foot off, climbing to third by halfway in 1:54 and catching the leaders by 30km (2.15:37), gaining momentum in the chase for Tokyo. Dominic was about three minutes behind at this point, not far off 3:50 pace.

By 35km Cameron had a 49 second lead and was on course for a 3:45-or so finish, with his lead growing to over 90 seconds by 40km. No British man won the 50km event in its 40 year history. Could that change? With only 10km to go, was history in the making?

You know what they say though, the last part is always the hardest. True enough, the rapid pace started to take its toll on Cameron, and by 43km he was down to third, slipping to fifth by 45km. He rallied to cross the line in 15th with 3:54:13, the second fastest of his career. However, Dominic was having quite the opposite experience over the closing kilometres, overtaking a number of the field, his teammate included, to finish tenth in 3:51:13, setting a new British Record with a four-minute PB.

He took 24 seconds off the long-standing record at the race in Dudince, Slovakia finishing in 3:51:13 pic.twitter.com/eKjpoX9d47

I feel this is a suitable reward for the 37-year-old, in his 27th race at the distance. He has represented his country for 20 years, including at two Olympics, two World Championships and two Commonwealth Games, the first being Manchester in 2002. For a bit more context, I was only two years old when he raced on the roads for the first time.

His brother Daniel finished 29th in 4.06:09, his best time since 2008. The race was won by Guatemala’s Bernardo Uriel Barrondo in 3:47:01. Race walking clearly runs in the Barrondo family, with his older brother winning silver at the 2012 Olympics.

All three are due to compete at the British Athletics 20km Race Walk Olympics Trials next Friday in Kew Gardens. Keep an eye out for our preview of Friday’s action in the coming days.

These Boots Are Made for Walking (a World Record)

The women’s 20km race walk has been dominated by China in recent years. Even more so when you exclude the dubious and discredited Russian performances. Six of the nine available medals at the last three World Championships, including a clean sweep in Doha in 2019, and one third of Olympics medals in the history of the discipline have gone to Chinese athletes.

So perhaps it comes as no surprise that the Chinese Race Walking Championships in Huangshan delivered some fast times. I say fast times, I should say the fastest time in history, as Yang Jiayu set a new World Record of 1:23:49, bettering the six year old mark set by her compatriot Liu Hong in 2015. That sets a 49 second improvement, or for context is the equivalent of 1:28:25 half marathon pace. Walking.

The 2017 World Champion made a break on the rest of the field in the first kilometre, going through halfway in 41:52 before picking up the pace in the second half.

With the event acting as a trial event for the Olympics, all three secured their spot in China’s team for Tokyo. It is the first 20km race in which more than one woman has walked sub- 1:25:00, with the top 10 all bettering the Olympic qualifying standard of 1:31:00.

Wang Kaihua won the men’s event in a NR of 1:16:54, moving him to third on the world all-time list, just 18 seconds behind the WR.

Last week’s weekend roundup included a run through of the NCAA Indoor Championships, which are always a highlight for ridiculous performances. This wasn’t the end of the NCAA action. Monday saw the Division 1 Cross Country Championships taking place that had been postponed from November.

By my count, there were 18 British athletes in action, nine in each race. The standout performance came from Patrick Dever, who finished an impressive fifth in 30:00 over the 10km course. That placing by the Preston athlete, currently studying at Tulsa, is the best by a British athlete since Gavin Thompson came third in 2003 and Jon Brown fourth in 1990.
Behind him there were good runs for Charles Hicks (14th / 30:21), Isaac Akers (19th / 30:26) and Jamie Dee (56th / 31:04).

The race was won by BYU’s Conner Mantz, the first American winner of the NCAA XC since Galen Rupp in 2008.

In the women’s 6km race, Portsmouth’s Poppy Tank (currently at the University of Utah) was the highest placed Brit in 27th, finishing with 20:46. Sarah Chapman crossed the line in 47th (21:04).

The highlight of the NCAA XC, however, is the start and first few hundred metres, with the entire field spread out horizontally, resembling a battle scene in a Hollywood movie more than a cross country race.

We are under way with the DI Men’s Cross Country Championship!#NCAAXC pic.twitter.com/HMUBSkuNj7

Elsewhere in the States

Whatever happens in the world, it is a near certainty that there will be a handful of American track meets taking place, and this weekend is no exception. On Friday Thomas George ran a 3:48.70 1500m PB in Missouri. This time currently puts him twelfth on the UK rankings for 2021. Just behind him on said rankings is Alexander Hanson after a 3:50.92 PB in Arkansas. This was a six second improvement for the Newbury athlete.

At the Rams College Invitational in South Carolina, Nathan Baker ran 14:30.60 to take the win in the 5000m, a 21 second PB that puts him third on the UK 2021 rankings (although at the time of writing only 12 athletes sit on that list thanks to the lack of racing here. Tynedale’s Thomas Joyce ran 14:45.76 in his debut over the distance.

At the same meeting, Emily Kearney ran a 15:39.65 PB over 12 and a half laps, her first time under 16 seconds, which currently puts her top of the UK rankings. A nice momento! She followed this up with a 4:26.46 1500m the next day, second best of her running career. Not a bad weekend.

It’s all Uphill in Italy

Last week we wrote about Fast Running’s own Robbie Britton’s return to racing with a 134th place finish at the Italian Cross Country Championships. An upward trajectory is certainly in place, with Robbie racing again today at the Biella-Piedcavallo, a 18.6km road race incorporating 600m of climb. He ran (or should that be climbed?) well to finish eighth in 71 minutes. Not bad for someone who says he is “no uphill runner”.

As I said at the start of this article, there is a sense of excitement with the imminent return of racing in England. This kicks off with the British Athletics Marathon and Race Walk Olympic trials at Kew Gardens on Friday.

There is a lot at stake in the four races, and we will have a dedicated preview of these in the coming days. The racing will be livestreamed on British Athletics’ website, kicking off with the race walks at 06:00 and the marathons at 08:00.

The competitor lists for the Müller British Athletics Marathon and 20km Walk Trials at Kew Gardens, London on Friday 26 March, are now available to view.

Beyond this, the government’s COVID roadmap allows organised sporting competition to take place from Monday 29th March. A number of road and track races expected in the coming weeks. These include the Comeback 5000 at Battersea Park, jointly organised by Belgrave Harriers and Herne Hill Harriers. Maybe I am biased towards this, as it will be my first race of 2021. As exciting as my participation may be, there are also excellent lineups assembled for the elite races, and we will have a preview of these during the week.

Kicking off the Commonwealths – weekend roundup