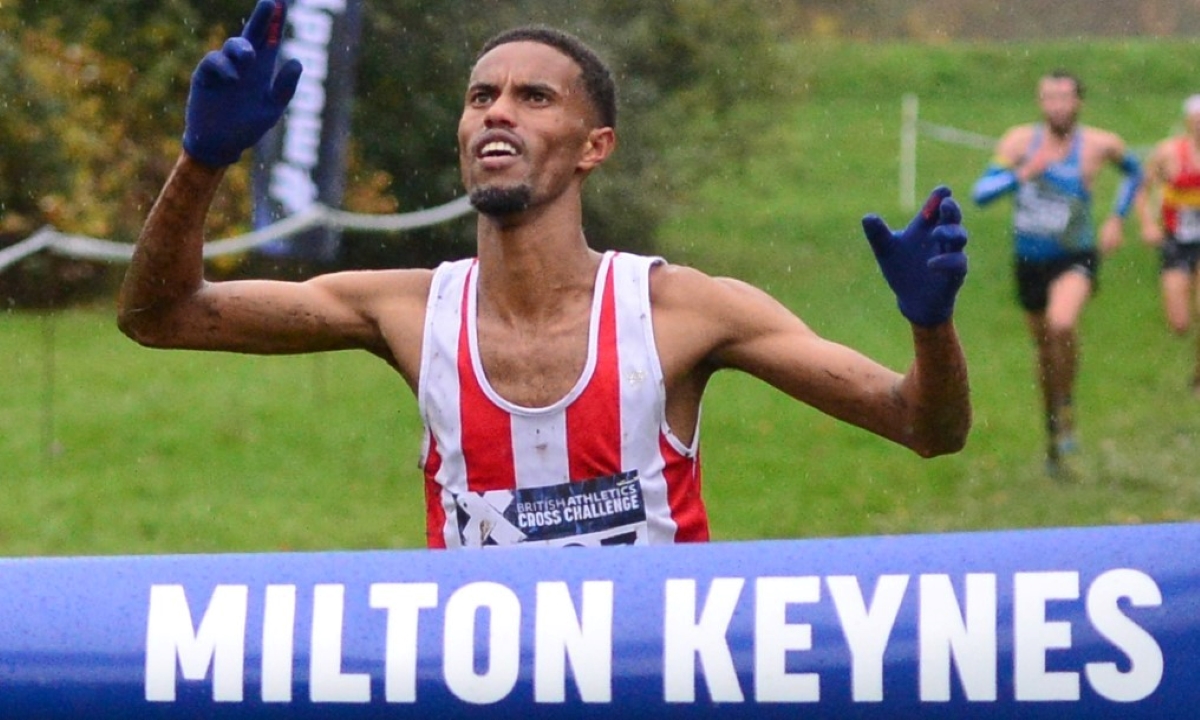 Kate Avery and Mahamed Mahamed retain senior titles British Athletics Cross Challenge in a weekend of classic XC conditions in the UK while Arter and Nesbitt kick off the IAAF Cross Country series in Atapuerca.

As athletes around the UK and Ireland took to their own muddy fields, in northern Spain athletes contended with windy conditions at the 16th Cross Internacional de Atapuerca. The opening race 2019-20 IAAF Cross Country Permit series had an exciting start with a shock win from Spain’s Ouassim Oumaiz giving the host country their first victory since 2006.

Oumaiz is admittedly the European U20 cross-country silver medalist but for him to take the lead 16 minutes into the 9k course and hold on to finish in 25:54 was rather unexpected, especially when you consider that the field included a host of top-10 placers from the World Champs in Aarhus earlier this year. Silver went to Uganda’s Thomas Ayeko in 25:56 and Bronze to his compatriot Timothy Toroitich in 25:56. No GB men took part in the race.

The women’s race was rather less of a wildcard as Ethiopia’s Senberi Teferi took her fourth consecutive victory in 25:38 for 8k. She was followed by Kenya’s Eva Cherono (25:42) and Fikadu Zenebu (ETH) in 25:44. Charlotte Arter went out strong, sticking with the lead pack to go through 2k in 6:55 but Cherono kept the pace moving it proved too much to hang on to. She still ran strong to finish in an excellent 7th place in the world class field in 26:29. In another super result for Wales, Jenny Nesbitt came 9th in 27:18.

Avery and Mahamed shape up for Euro Cross Trial

Back in the UK, Kate Avery (Shildon) and Mahamed Mahamed (Southampton AC) both retained their senior titles in the British Athletics Cross Challenge at Teardrop Lakes in Milton Keynes, leaving them ready for the Euro Cross trials in a couple of weeks.

The MK course features a mixed terrain and a bunch of short, punchy hills but over 5.6k Amy Griffiths (Aldershot, Farnham & District; Rob Denmark) proved up to the challenge as she finished second in 20:11. Bronwen Owen who has previously run for GB in World Cross junior champs placed third in 20:19. Despite being out at the front with Avery until relatively late in the race, Emily Hosker-Thornhill had to settle for fourth and Fast Running’s own Hannah Irwin (Guildford & Godalming) came a storming fifth place. Get in Hannah! Dani Chattenton (Milton Keynes Distance Project) was sixth.

With icy rain now thrown into the mix for the men’s race it truly was mud-and-guts race that resulted in a third consecutive win for the Mahamed Mahamed over 9.05k. Sam Stabler of Wreake & Soar Valley held off a home-straight challenge from ultra-distance man Tom Evans (Lewes) and Jack Gray (Cambridge & Coleridge) followed him home for fourth. Alex Teuten (Southampton) was fifth. Quality field on show at the Bobby Rea International

There was a victory for Team New Balance MCR’s Adam Craig at the Bobby Rea International XC in Belfast and judging by the photo it looks like they had proper XC weather too! Craig ran 8k in 29:56 to finish ahead of the Welsh 2-3 of James Hunt and Ieuan Thomas in 33:00 and 33:05.

In the team standings though it was City of Derry Spartans who came out victorious, Beechmount Harriers second and North Belfast Harriers third. Ireland’s Michelle Finn made the home crowds happy as she powered home in 19:11 to take gold in the women’s race. GB’s Mhairi MacLennan was hot on her heels to place second in 19:14 comfortably holding off Armagh AC’s Fionnuala Ross who completed the 5k course in 19:35. North Down AC topped the team standings, with Armagh AC and Beechmount Harriers in their wake.

The Lindsays Short Course XC Champs covers a 4k course which Butchart finished in 11:54, just one second ahead of a strong challenge from Glasgow Uni’s Sol Sweeney and Morpeth’s Carl Avery who completed the race in 11:58. Overall, the team victory also went to Central AC.

In the women’s race it was Edinburgh Uni Hare and Hounds who took the team Gold. Annabel Simpson led the women home in 13:57 for the host club, Fife AC. Making it a one-two Jenny Selman was second in 14:04 leaving it to U20 champion Megan Keith to take the bronze spot for Inverness Harriers in 14:08. Over in France at the Urban Trail Lille 5k there was only one GB runner in the form of a rather mysterious Barnaby Pell, who we can’t find any information on other that he finished in 18:22. Whilst that might be intriguing, Robert Keter is more likely to be the name of interest to you.

The Kenyan took seven seconds off Bernard Lagat’s previous world record with his winning time of 13:22 (subject to ratification). Now, that’s a pretty speedy 5k but it is worth noting that the 5km road distance has only been recognised as a world record event since November 2017.

There were other faster times clocked before that, but Keter’s winning time in Lille is the fastest since it became an officially measured record. Mercy Jerop, also from Kenya was first female in 16:21. The women’s record stands at 14:44 and is held by Sifan Hassan.

At the Semi-Marathon De Tamesna in Morocco Elsey Whyman-Davis (Preston) took 10 seconds off her half marathon PB set earlier this year in Barcelona. She ran 72.34 on a hilly, windy course to take a huge boost of confidence with her through to Valencia Marathon in just three weeks time. It was great to see her back in PB shape. Her current marathon PB stands at 2:42:29 so we’ll be looking out to see how much she knock off that in Spain.

XC league action across the UK

It was a busy weekend of cross country league races but most of the results are still outstanding including the Surrey League, Hampshire League, Gwent League and Manchester Area League amongst many others. Polly Keen was the winner of the Midlands Women’s League Division One in a time of 25:08 and Rebecca Weston won the Kent League at Bexleyheath in a time of 18:19.

The Met League is one of the most competitive XC leagues in the country and this weekend’s race at Welwyn was no different. Elizabeth Janes of Herts Phoenix took the win in the senior women’s race in a time of 28:30, eight seconds clear of Revee Walcott-Nolan (Newham & Essex Beagles) in 2nd and Nina Griffith (Highgate) in 3rd (28:58).

The senior men’s race was won by Serpentine’s Callan Moody in a time of 24:27 with the sub 30km man just edging out Highgate’s Alexander Leprêtre (24:28) with an excellent run for Austin Roth of Victoria Park Harriers leaving him in 3rd in 24:36.

It wasn’t just abroad that there was spike-free action. Away from the mud splatters of Cross Country there were a few other races happening in the UK this weekend amidst the rather calmer conditions of Sunday morning. The Race Organiser’s Draycott 10k resulted in a win for Thomas Keenan (Coventry Godiva Harriers) in 35:04 and Rafaela Fonseca (37:53). Run Through’s Richmond Park Half Marathon took just 1:26:29 for Lindy-Lee Folscher to finish and gain her top spot, while for the men it was James Kennedy in 1:18:32.

Fylde Coast Runners held their Windmill Remembrance 10k and it was their own Jody McGurk who cross the line first for the ladies in 38:09 followed by Annabel Ralph (Blackburn Harriers) in 38:48. The men’s race has a sub-34 top two, with Rossendale Harriers’ Jonathan Cleaver finishing in 33:40 with Dewsbury Road Runners’ Mark Holden eight seconds behind him.

Lee Strachan was the winner of the Glen Clova Half Marathon in a time of 76:00 and the winning woman was Lynsay Hall in 91:36. At the Coalville 10k Thomas Yates did it for the V40’s holding off the youngsters to break the tape in 37:57. Gaynor Watts did the same for the ladies, also running the V40s to victory in a time of 47:10.

Finally a huge well done to Hannah Taunton on her international debut finishing 5ht in the T20 1500m at the World Para Athletics Championships in Dubai in a time of 4:45.01.

The Peterhead AC 10k results are tbc but will be published here later as well as the results for Bath Hilly Half which will be posted here and the Poppy Half Marathon here.