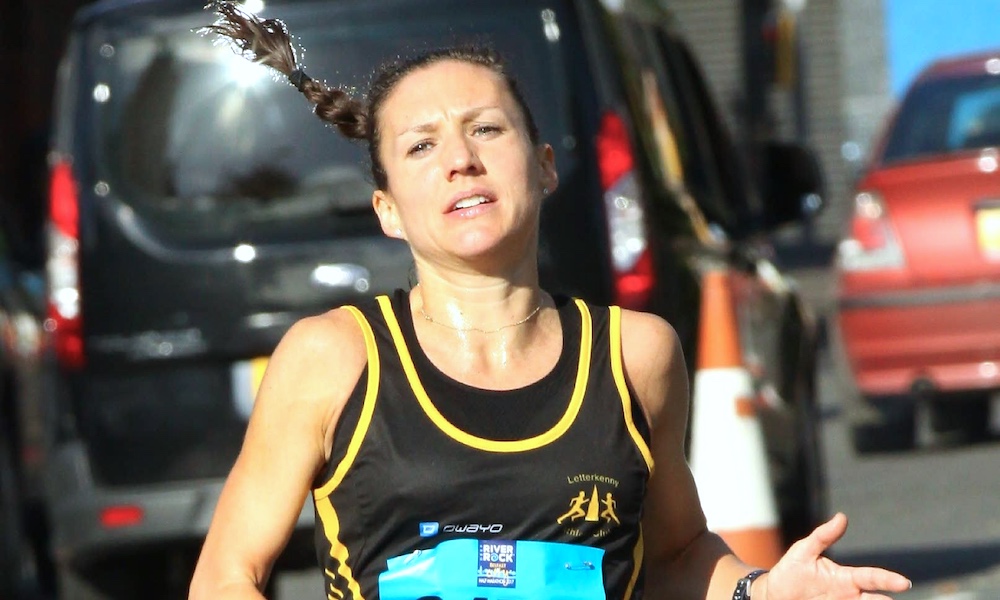 A highlight of a busy weekend was Catriona Jennings storming to third at the World 100k Championships in Berlin, Germany. Lindie Naughton brings you all the action, from home and overseas.

A stellar international entry turned out for the elite race at the Antrim Coast Half Marathon, held in Larne on Sunday (August 28.

Winners were Jemal Yimer of Ethiopia in 59 mins 4 secs and Beatrice Chepkemoi Mutai in 67:37. First home of the local entry in 21st place was William Maunsell of Clonmel AC in in 66:04. Jake O’Regan of St John’s AC was 26th in 67:02 and David Mansfield of Clonmel AC one place behind in 67:05.

Second woman was Fionnuala Ross of Armagh AC in 74 minutes exactly. Jessica Craig of North Down AC was second of the local entry in 76:49 and Kerry O’Flaherty of Newcastle and District AC next in in 78:33. A festival of running in Longford

On a weekend of distance races, Barry Sheil in 71:26 was the winner of the Longford Half Marathon. Fifth and first woman was Margaret Ludick in 78:51. Winner of the marathon was Matthew Collins in 2:35.36. First woman was Carmel Ward in 3:08.44.

In Co Wexford, it was SBR Ferns AC on the double at the Oylegate Half Marathon with Myles Gibbons the winner in 72 mins 6 secs and Belinda Kehoe first woman in 98:55.

Local athletes dominated the Boston Scientific Half Marathon in Clonmel where the winners were Paul Minogue in 73 mins 56 secs and the ageless Angela McCann in 83:43; both are members of Clonmel AC. Garrett Lordan of Clonakility Road Runners was second in 74:30, with Niamh Cronin of St Finbarr’s AC second woman in 87:006.

Milford AC’s Marty Lynch was the winner of the Donegal Half Marathon in Letterkenny. Lynch made his break around the eight-mile mark on the slight climb at Rashedog and went on to win by 40 seconds in a time of 73 mins 34 sec.Next were Finn Valley pair John McElhill, second in 74:13 and Dermot McElchar, third in 74:19. Helen McCready of Rosses AC proved the class of the field in the women race, winning with a time of 83:38. Ciara Cunningham in 92:31 and Julie McNamee in 94:27, both Tir Conaill AC members, were second and third. The race winners are preparing for autumn marathon – Dublin for Lynch and Berlin for McCready.

A day earlier, Peter Somba of Dunboyne Ac stretched his winning streak ever further with victory in the Tullamore Half Marathon on Saturday (August 27). Somba’s time of 67 mins 24 secs saw him finish two minutes clear of Ferbane AC veteran Mick Fogarty who finished in 69 43. Third in 71:12 was Derek Crammond of Sli Cualann AC.

Catherine O’Connor of Sli Cualann AC was first woman in 83 :29 followed by Catherine Donnelly of Edenderry AC in 85:43 and Heather Murphy of St Michael’s AC in 85:47.

Winning the Leinster Half Marathon senior team titles were the men of host club Tullamore Harriers and the women of Athlone AC. The Crusaders AC men and Brothers Pearse women took the over 35 team titles, while the Mullingar Harriers men and Athlone AC women proved best over 50.

Over shorter distances, Ronan Mcllvenny of Annadale Striders was the winner of the Tara 5km on Friday evening (August 26). His time was 16 mins 36 secs. First woman was Aoife O’Leary of Sportsworld in 18:22.

Also on Friday, David Spalding of Ballydrain Harriers was the winner of the Ards 5-Mile in Newtownards in 26 mins 12 secs.

First woman in 30:10 was Alison Stocks of Annadale Harriers. On the same evening, Scott Rankin of Foyle Valley AC in 25:32 and Ciara Toner of City of Derry Spartans in 29:18 were the winners of the Portrush 5-Mile.

Winning the Celbridge 5km in Co Kildare on Thursday evening (August 25) was Eoin Everard of Kilkenny City Harriers in 15 mins 7 secs. Rory O’Connor of North Cork AC was second in 15:15 and Brian O’Kelly of Crusaders AC in 15:19.

Edel Monaghan of was first women in 16:47, with her Dublin City Harriers clubmate Jodie McCann second in 17:14 and Kate McDonald of Ballyroan Abbeyleix and District AC third in 17:37

Mark Milner of Tullamore Harriers race a time of 1:47.49 when finishing fourth in the men’s 800m A at the BMC Grand Prix in Loughborough on Saturday (August 27) . Winning the 3000m steeplechase in 8:57.87 was Finley Daly of Sligo AC.

In a high-class field, which saw a French 1-2 and a new European Record, Jennings ran a smart and controlled race that saw her take the third spot on the podium ahead of some world class US and South Africa athletes finishing strong.

In Chamonix, France, Eoin Keith finished second M50 with a time of 29 hrs 08 mins 40 secs for the classic 171 km UTMB route in the foothills of Mont Blanc.

Finally, in the 100km CCC, Paddy O’Leary clocked a time of 12:19.43 after battling with some sickness throughout while Ellen Vitting of Trim AC finished in 17:43.4.

Killian Mooney of Dundrum South Dublin was the winner of the Downshill Uphill Mile in Co Wicklow with a time of 6 min 25 secs. First woman in 9:24 was Kathryn Barr of Kilcoole AC.

Winners of the final round in the Longford Trail Run Series at Newcastle Woods were Oisin Lane in 17:22 and Maura Dervin in 20:17.