Irish runners impress on the road and track 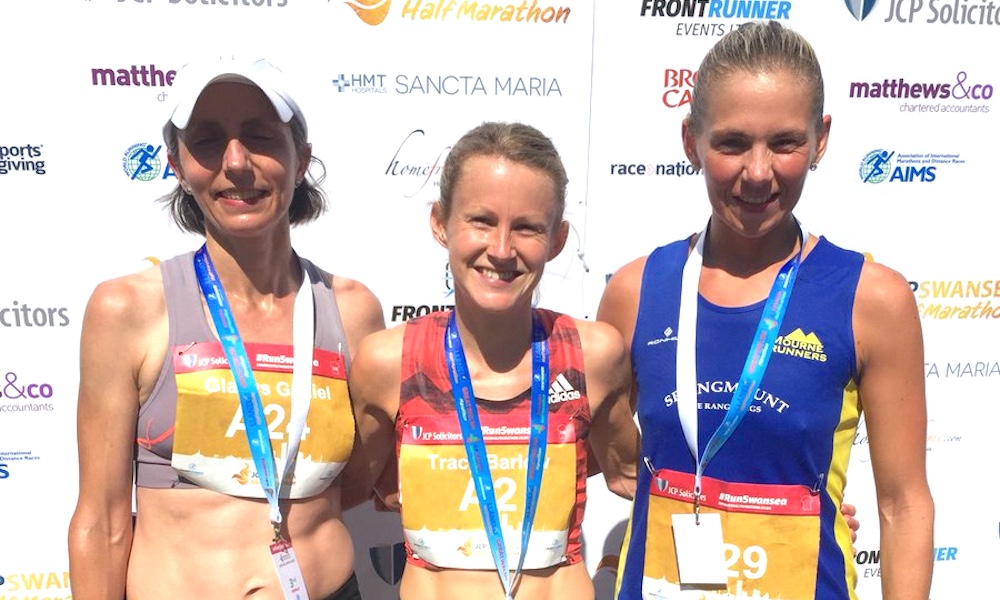 Elsewhere this weekend, a host of Irish track athletes were competing overseas at the British Miler’s GP in Loughborough and the Mannheim Junior Gala in Germany.

Irish marathon champion Laura Graham of Mourne Runners finished second at the Swansea half marathon on Sunday (June 24) in a time of 75 mins 58 secs – not far off her best time of 75.15.

Finishing not far behind her in third place with a time of 77.24 was Gladys Ganiel O’Neill of North Belfast Harriers.

Both women will represent Ireland in the marathon at the European Championships in August, along with Lizzie Lee, Breege Connolly and Claire McCarthy who won this race last year.

Freddy Sittuk and Annette Kealy made it a Raheny double at the Irish Runner 5-Mile, held in Dublin’s Phoenix Park. Sittuk showed no signs of tiredness after finishing second in the Dunshaughlin 10km the evening before. He tucked in behind Brendan McDonnell of Galway City Harriers in the early stages of the race and came home in 25 mins 8 secs.

McDonnell was eight seconds behind for second, with Eskander Turki of Monaghan Town Runners third in 26.26.

Kealy, who a day earlier ran the fastest parkrun time of the weekend across Ireland, finished in 30:11, followed by her Raheny clubmates Fiona Stack, and Zoe Quinn. A total of 1,501 completed the race, held in warm sunny conditions. Tonosa finished in 30 mins 16 secs outside the course record of 29:21 set by Noel Cullen of Cllonliffe Harriers in 2000. Second in 30:22 was Raheny’s Freddy Sittuk, who is back in Ireland after a seven-month break.

In a close fought race, Conor Bradley was third in 30:36, Mark Kirwan of Raheny Shamrock fourth in 30:38 and Emmett Dunleavy of Sligo AC fifth in 30.52. Also under 31 minutes were marathon man Sergiu Ciobanu of Clonliffe Harriers, Eric Keogh of Donore Harriers and Tallaght’s Tomas Fitzpatrick.

Rathfarnham WSAF was first team ahead of Donore Harriers, with an incredible 60 teams entered.

Continuing her winning streak in the women’s race was Kerry O’Flaherty of Newcastle and District in 34 mins 37 secs. Siobhan O’Doherty of Borrisokane AC was second in 34:59 and Una Britton of Kilcoole AC third in 35:08.

Jane Bandila in fourth place was leading Dunboyne AC to team victory over Clonliffe Harriers, with over 30 teams entered. Close to 800 completed the race.

Rathfarnham marathon man Sean Hehir proved the class of the field at the Strawberry 10-Mile, Enniscorthy, which he won by almost ten minutes in a time of 51 mins 46 secs. First woman and fifth overall was Linda Byrne of DSD in 62 mins 58 secs.

In the five mile race, Gavin Keogh of Donore Harriers was the overall winner in 38 mins 53 sec with Anne Sullivan of DMP first woman in 33 minutes.

Winners of the Pink Rock 10km, at Rosbercon Millbank in Co Kilkenny were James Ledingham of Kilkenny City Harriers in 34 mins 11 secs and Sally Forristal of host club St Joseph’s in 38:42. Second woman was Fiona Kehoe of Kilmore AC in 39:29.

Winners of the Dromore 10km on Sunday (June 24) were Stephen Duncan of Omagh Harriers in 33:48 and Amy Bulman of Willowfield Harriers in 39.45.

Patience Jumbo Gula of the St Gerard’s club in Dundalk proved the star of the talented group of Irish sprinters who competed at the two-day Mannheim Junior Gala in Germany over the weekend.

With the European U18 Championships in Hungary just ten days away, Jumbo Gula’s personal best time of 11.51 secs propels her from fifth to top of the current European U18 rankings.

A day later, she helped the Irish U20 4 x 100m team to victory in a time of 44.31 secs, running the opening leg before passing on to Ciara Neville of Emerald AC, who was followed by Tallaght’s Rhasidat Adeleke, with Gina Akpe Moses of St Gerard’s bringing home the team. Victory for the Irish was all the sweeter since they had been disqualified in the Saturday 4 x 100m.

Not to be outdone, the boys quartet of David McDonald from Menapians, North Down’s Aaron Sexton, Jack Dempsey of Galway City Harriers and David Murphy of Gowran AC set a new Irish U20 record of 40.30 secs when finishing second behind Great Britain on Saturday. The time is a World U20 qualifier.

In the women’s 400m on Saturday, Davicia Patterson of Beechmount Harriers continued her spectacular season with a personal best 52:88 secs and Irish U20 record which was the fastest run of the day. It lifts 17-year-old Patterson to sixth on the all-time Irish list and second on the current European U20 list. Running a time of 54.66 secs for fifth in the same race was Ciara Deely of Kilkenny City Harriers, currently 13th on the European U20 list.

On Sunday, Akpe-Moses won her 200m heat in 23.86 secs, although Adeleke ran a fractionally faster personal best time of 23.85 secs in her much faster heat, won by Alisha Rees of Great Britain in 23.44 secs.

David McDonald clocked 21.48 secs in the 200m, the fourth fastest time across four heats. Miriam Daly of Carrick-on-Suir AC ran a time of 62.13 in the woman’s 400m hurdles.

In the 100m hurdles, Molly Scott of St LOT finished in 14.11 secs. Despite windy conditions, Sophie Meredith from St Mary’s Limerick jumped 6.00m and Ruby Millet of St Abban’s 5.95 in the long jump.

John Travers of Donore Harriers ran a season’s best time of 3:40.74 to win the A grade 1500m at the BMC Loughborough GP in England on Saturday (June 23). In the same race, Brian Fay of Raheny Shamrock finished fourth in a personal best 3:43.43, his Raheny clubmate, Kieran Kelly finished sixth in 3:44.14, and Letterkenny’s Danny Mooney ninth in 3:46.48.

A team from host club Parnell AC triumphed at The Relay a five leg races held over 70 kilometres taking in hills and trails around Avondale House, Claravale, Glendalough, Lough Tay and Glenmalure in Co. Wicklow on Saturday (June 23).

The team of Clive Quinn, Alan Dalton, Catherine O’Connor,Ray Kenny and Tom Moore finished in 4 hrs 45 mins 19 seconds. Less than five minutes behind in 4:39.47 was a team from Ballyroan Abbeyleix and District, captained by the vastly experienced Irish mountain running international Martin McDonald. For his team, McDonald co-opted son Cian, daughter Brenda and friends Tom Lupton and Tom Dunne. Third was a team of Irish Mountain Running Association regulars who finished third in 4:43.57.

Aidan Hogan of the Rising Sun club won the Energia 24-Hour race held in Victoria Park, Belfast from Saturday to Sunday (23-24 June). Hogan started conservatively, breaking into the top ten after 40 laps and over six hours of running.

He took over the lead after thirteen and a half hours and held on until the finish, running a total of 270.39 kilometres.

Eoin Keith of Sportsworld AC in Dublin finished second with 237.64km. Like Hogan, he made steady progress after a conservative start and moved into second place after 94 laps and fifteen hours of running. In third place was Scotland’s Nathan Flear with 237.62km.

First woman was Samantha Amed of Belgrave Harriers with 222.7km. She was followed by Louise Smart of Antrim Harriers with 206.29km and Paula Wright of the Marathon Club Ireland with 196.3km.

First home in the 12 hour event with a total of 115.7 kilometres was Ger Copeland of Dublin Bay Runners. Fiona Prue of Ballydrain Harriers with 111.9 was second and first woman. Tim Brownlie of Willowfield Harriers was a clear winner of the 100km in 7:47.41.

Simon Ryan of Boyne Ac and Aisling O’Connor of Edenderry AC were the winners of the Drogheda Midsummer 5km, on Friday (June 22). Ryan was a clear winner in 16 mins 1 secs, with O’Connor 12th overall in 18:02.

On the same night, in the Phoenix Park, John Paul O’Brien of Dublin Front Runners AC was first home in the annual Dublin Pride 5km with a time of 17:04. Sli Cualann’s Sarah Baryga was first woman in 18:16.

Winner of the Donoughmore 7-Mile, held in Stuake, Donoughmore, Co Cork on Thursday (Jul 21) was Anthony Mannix of Leevale AC in 39 mins 5 secs. Finishing ten seconds behind for second was the veteran Cathal O’Connell of St Finbarr’s.

Nathan O’Leary of Leevale who is still a junior, was third in 39:27. First woman was Grainne O’Callaghan of North Cork AC in 45:57. Leevale’s Helen Leonard was second and Joan Ennis of Grange Fermoy third.

Karina Murphy of St Finbarr’s, who won the Inniscarra 4 mile last week was first woman ahead of Helen Gilroy of Midleton AC and Anne Wolfe of St Finbarr’s.

Keith Shields of Foyle Valley AC was a clear winner of the Lisburn Half Marathon in a time of 70 mins 26 seconds last Wednesday (June 20) . Second was Conal McCambridge of North Belfast Harriers in 71:11. In the wheelchair race Jim Corbett and Paul Hannan crossed the line together in 66 mins 24 secs. First woman was Rachel Mitchell in 78:52. Karen Alexander was second in 83.14.

Winner of the 10km was local athlete Christopher Madden who out-sprinted Andrew Annett of North Belfast Harriers in a spring for the line winning in 31:36.

First woman and eighth overall was Jessica Craig of North Down in 35:52. Rebecca Henderson of Queen’s AC was second in 37:21.