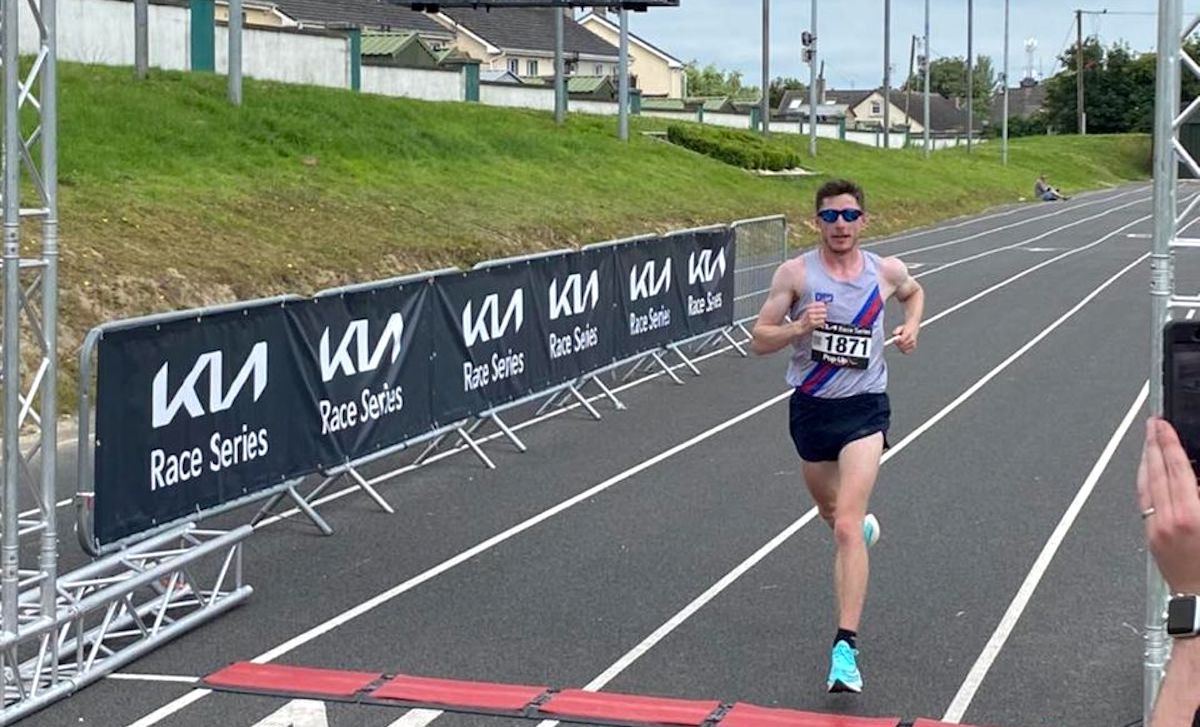 As per usual Lindie Naughton reports on all the Irish action from the weekend, including standout performances and team spirit from our Masters athletes.

Paul O’Donnell of Dundrum South Dublin AC produced the road running performance of the week when he won the Edenderry 10-Mile in Co Offaly on Sunday morning (July 10).

O’Donnell broke 50 minutes to finish in a new course record time of 49:49, with William Maunsell of Clonmel AC 50 seconds behind exactly for second place.

On a good day for DSD AC, Emmet Jennings and Robert Corbally finished third and fourth, which should help their club’s standing in the KIA team league.

Picking up solid points for Leevale AC were Michelle Finn, who was first woman in 57:42, also a course record, and her teammate Lizzie Lee third in 59:47. Splitting them for second place in 59:08 was Noeleen Scanlan of Letterkenny AC.

Maria McCambridge of DSD AC, who was fourth woman, picked up further points for her team. With six to count, Dundrum was the winning team with 121 points; Leevale was second with 134 points and Mullingar Harriers third with 261 points.

Individually, Finn’s win will see her threaten her clubmate Lizzie Lee in the women’s overall standings, with just one race left in the KIA Series. O’Donnell now looks favourite to take the men’s overall prize, with two wins and a second place to his credit. As for the overall team prize, with DSD AC now just two points off Leevale’s total, it could all come down to the final race — the Cork City10-Mile on August 20.

Clohisey battled it out from the start with Eskander Turki of Annadale Striders, pulling away to win by five seconds in 51mins 3 secs; Turki finished in 51:08. Third in 51:43 was Sean Doyle of North Cork AC.

Ciara Toner of City of Derry Spartans was first woman in 60:28, with Donore Harriers pair, Niamh Clifford and Sorcha Loughnane, second and third in 61:01 and 61:9 respectively. Team winners were the Clonliffe men and the Donore women.

Sergiu Ciobanu of Clonliffe Harriers continued his recent winning streak with victory in 54 mins 7 secs at the Mooreabbey Milers 10-Mile in Galbally, Co Tipperary. Second in 55:18 was Paul Maloney of Mallow AC, while third in 55:57 was John Meade of St Finbarr’s AC.

Angela McCann of Clonmel AC made it a second victory in three days when she finished first woman in 66:14. Linda O’Connor of Cork Tri Club was second in 70:27 and Gwen Conroy of Watergrasshill AC third in 71:47.

In other Sunday races, Dunboyne AC’s Peter Somba and Maebh Eakin of Dunleer AC were the winners of the Dunleer 4-Mile in Co Louth. Somba was a clear winner of the race in 19 mins 23 secs, while Eakin finished in 24:10.

Over a thousand runners signed up for the Kilkee Half Marathon and 10km in Co Clare on Saturday (July 9), where Jake O’Regan of St John’s AC produced the performance of the day when winning the 10km in 31 mins 43 secs. Daragh Keegan of Donore Harriers was second in 35:44 and Laura Mooney of Tullamore Harriers third and first woman in 35:49.

Master athletes dominated the half marathon with Joseph Lillis of United Striders the winner in 76 mins 7 secs and Yuliia Tarasova first woman in 85:23.

In Co Galway, on Saturday evening, English vistor Jamie Walsh won the Headford 8km in a time of 27 mins 15 secs. Stephen Casserly of Castlegar AC was second in 28:05.

A race every night of the week

On Friday (July 8), Pat Hennessy had a comfortable win in 32 mins 46 secs at the Deise College Dungarvan 10km. His West Waterford AC team mate Raivis Zakis was second and first M40 in 34:06.

First woman was Angela McCann of Clonmel AC, who was also first W50, in 39:15. International race walker Kate Veale of West Waterford AC — who had hoped to be competing at the World Championships in Oregon next week — was second in 39:52.

Winners at the Corkbeg 4-Mile in Co Cork on Thursday (July 7) were Frank O’Brien of East Cork AC in 20 mins 30 secs and Niamh Cronin of St Finbarr’s AC in 25:42. Finishing sixth and first woman was Jane Ann Healy of Galway City Harriers in 29.12. Peter Somba of Dunboyne AC and Conan McCaughey of North Belfast Harriers proved the class of the field at the Oldcastle 5km in Co Meath on Wednesday (July 6) with Somba the winner in 14 mins 48 secs and McCaughey two seconds behind for second.

Third in 15:56 was Matthew Glennon of Mullingar Harriers. Trim AC’s Edel Gaffney was first woman in 18:45, with Theresa Gibney of North Westmeath AC second in 19:45 and Susan Glennon third in 19:57.

Further south, at the Dundrum 10km in Co Tipperary, Michael Harty of East Cork AC was the winner of the annual Coillte 10km in 30 mins 13 secs.

Second in 30:26 was Evan Fitzgerald of Clonmel AC, while third in 31:03 was Colin Maher of Ballyfin AC. Leevale AC’s Sinead O’Connor was first woman in 33:57, followed by local athlete Dymphna Ryan of Dundrum AC in 36:04 and Carol Finn of Leevale AC in 38:29. McElhinney being presented with the Athlete of the Meet award.

Darragh McElhinney of UCD AC was presented with the Athlete of the Meet award at the Cork City Sports on Tuesday (July 6) after winning the men’s 3000m in a new Irish U23 record time of 7:44.01.

In the men’s mile, Cathal Doyle of Clonliffe Harriers won the race in some style. Doyle’s time of 3:56.35 puts him second behind Andrew Coscoran of Star of the Sea AC on the current mile listings.

Fastest times at the Afternoon of Miles, hosted by North Belfast Harriers at the Mary Peters Track on Saturday, was a 4:04.60 for Andrew Milligan of North Belfast and a 4:40.97 for Maisy O’Sullivan of St Abban’s AC.

At the National Juvenile Championships Day 3 in Tullamore on Sunday (July 10) the M19 1500m proved a thriller.

Irish The Masters In Finland

Four medals for Niamh O’Sullivan of An Riocht AC was just one of the many highlights of a mighty Irish effort at the World Masters Athletics Championships in Tampere, Finland (June 29-July 10), with “not a Vaporfly, Alphafly or Dragonfly in sight, just pure class and talent” as O’Sullivan’s friend and protégée Shona Heaslip put it.

O’Sullivan, a former British and Irish cross country champion many times over, started her week with victory in the W60 8km cross-country also taking W50 team gold. On the track, she finished third in the 5000m and then, on the penultimate day of competition, turned to the roads, where she won the 10km.

O’Sullivan was not the only multiple medal winner for Ireland. Donna Evans of Clones AC also won four medlas – she started with the W55 cross-country, also taking team gold, followed that with silver in the 10km and and completed her haul with gold in the half marathon.

In the middle distances, Anne Gilshinan of Slaney Olympic AC, Mark O’Shea of Drogheda and District and Denise Toner of Clones AC all had 800m/1500m doubles, Gilshinin — a world record holder for 5000m — in the W55 category, O’Shea M50 and Toner W40.

A notable winner in the W65 half marathon was former Irish international athlete Christine Kennedy.

Technically Kennedy was competing for the USA, where she lived for many years, but she will always be a Galway girl. Winning the W60 steeplechase was Australia-based Sue Zlnay; before she emigrated, Zlnay competed for many years in Dundrum South Dublin colours.

Other winners were Michelle Kenny in the W40 cross-country and John McDermott of Sligo AC in the M75 300m hurdles.

Closest fought competition of the week was the M35 weight for distance, which John Dwyer of Templemore AC won in the final round by a single centimetre. Dwyer had earlier won the hammer and finished second overall in the throwing pentathlon.

With 94 competing, Ireland was the tenth largest team at the competition and won a total of 58 medals; 25 gold, 15 silver and 18 bronze. That was enough for 11th on the medals table (unofficially). Not bad for a small country! Zak Hanna of Newcastle and District AC finished a creditable 13th in the savagely steep Grossglockner uphill only mountain race in Heilgenblut, Austria on Sunday (July 10).

Also running was Enda Cloake of Slaney Olympic AC in Co Wexford who finished 61st in 93.33, well up in the field of 876 finishers. Ireland was represented by just one athlete at the European Masters’ Off-Road Championships at La Féclaz-Chambery Mountain, in France which consisted of a 10km uphill only race on Friday (July 8) and a 40km trail run a day later. In the uphill 10km, Gerard Maloney of SBR AC in Co Wexford finished fourth M60 in 59 mins 31 secs.

At the off-road Aughty Warrior Challenge 22km and 10km in Kilchreest, Co Galway, on Saturday (July 9) brothers Brody and Amir Barkan finished the 10km together in 47 mins 16 secs. Niamh Murphy, ninth overall, was first woman in 55:12. Winners of the 22km were Marcus Bishop in 93 mins 16 secs and Jenny Algar in 1:55.11.