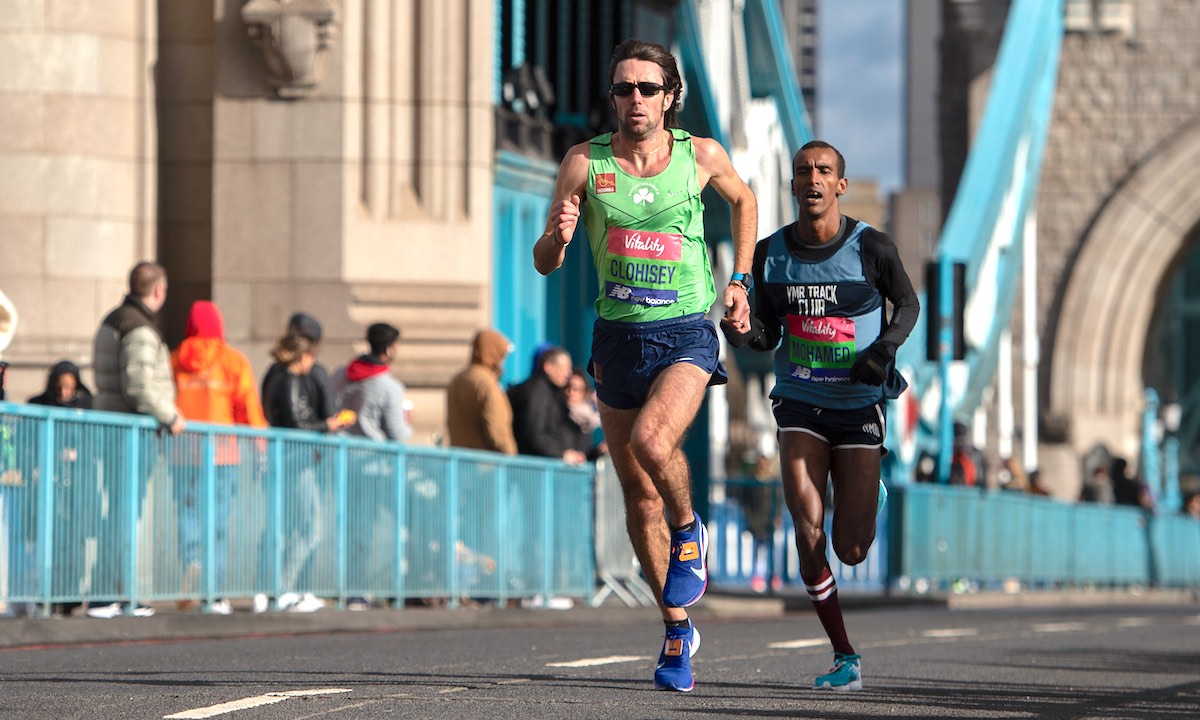 On a cold, blustery day, Breege Connolly ran a PB of 74:49 to finish first W40 and ninth in the women’s race at the Vitality Big Half in London on Sunday (March 10).

The City of Derry runner, who recently won the NI & Ulster cross country championships, took over a minute off the 76:09 she ran at last year’s Edinburgh Half Marathon.

In the men’s race, Mick Clohisey of Raheny Shamrock continued his preparations for next month’s London Marathon by clocking a time of 64:58 for ninth place.

Race winner in a sprint for the line was Mo Farah in 61:15. A full report can be found here.

Also in England, Conor Dooney of Raheny Shamrock ran an excellent time of 29:31 to finish second at Trafford 10k near Manchester on Sunday – just five seconds behind the winner Bart van Nunen who won in 29:26. Matt Bergin of Dundrum South Dublin AC was a close third in 29:39 and Kevin Seaward of St Malachy’s AC ninth in 30:20.

In a high quality women’s race, Sara Treacy of Dunboyne AC finished third in 34:16; winner was Laura Weightman of Morpeth Harriers with a big PB of 31:59, with Beth Potter second in 32.03.

Paul Pollock of Annadale Striders was a comfortable winner of the Surrey Half Marathon in Woking on Sunday.

Pollock finished in 66:24 with Abdulaziz Mahamedsalih Ebrahim second in 66:54.

At the Bohermeen Half Marathon in Co Meath, Yared Dersese of Carrick Aces beat Gary O’Hanlon of Clonliffe Harriers for victory with a time of 67:04.

O’Hanlon clocked 68:31 and finishing third in 68:41 was Eric Keogh of Donore Harriers.

Also on Sunday, Brian Kirwan of the host club won the 10km race at the St LOT Race for Life in a time of 34:14. Colin Payne of Tinryland AC in 16:57 and Laura McDonnell of Tallaght AC in 18:46 were the winners of the 5km.

John Travers of Donore Harriers won the Bundoran 10 mile in 51:44 over a hilly and sandy course on Saturday. Kyle Doherty from City of Derry Spartans was second in 52:47 and Tara Malone first woman in 67:12.

Lizzie Lee of Leevale AC ran 16:48 at the Westport parkrun on Saturday to record the fastest ever women’s time at Irish parkruns.

It was also a fourth-course record for Lee. This week’s Irish parkrun top 10 can be found here.

This was SO much fun; my first national record 😊. I love park run especially when I’m away for the weekend and need a speedwork session! Followed it up with a 10 year old niece’s birthday party 🎈 #loveparkrun #westportlees https://t.co/UnGH46CXAx

Sarah Healy and Efrem Gidey were runaway winners of the senior race at the All Ireland Schools Cross Country Championships in Clongowes Wood College, Clane, Co Kildare on Saturday.

Both were defending champions and for Healy from Holy Child Killiney it was a sixth consecutive victory – a perfect six wins from six starts for the European U20 1500m and 3000m champion. St Angela’s Waterford proved best of the teams. Gidey raced away from the pack early in the boys senior 60000m after Keelan Kilrehill of Colaiste Iascaigh Sligo had pushed the pace on the opening laps. Kilrehill was a clear second with third placed Miceal McCaul leading St Colman’s, Newry to team victory over Belvedere College and St Kieran’s Kilkenny.

Grace McKenzie of Belgooly AC regained the Irish indoor pentathlon record with a score of 4230 points at the NCAA Div 1 Indoors in Birmingham Alabama on Friday (March 8), where she was representing McNeese State.

With personal bests in the high jump of 1.75m and in the 800m of 2:13.95, McKenzie was adding 16 points to Kate O’Connor’s record of 4214 set last month in Cardiff. It was a fourth improvement to the record this season from the two athletes.

Highlight of the Irish performance at the European Throwing Cup in Samoria, Slovakia (March 9-10), was an Irish U20 record of 48.95 for Kate O’Connor of St Gerard’s Dundalk. O’Connor also holds the Irish junior heptathlon record.

In the men’s U23 discus, Eoin Sheridan of North Westmeath AC threw a personal best of 54.40 for ninth overall

World champion Joe Gough of West Waterford AC continued his winning streak at the National Masters Indoors in Athlone on Sunday with a commanding victory in the M65 800m with a time of 2:23.83. No surprises in the men’s shot putt, where current Irish senior champion Sean Breathnach was almost three minutes clear of the field with a best of 16.74. Second and first M45 was his Galway City Harriers clubmate Lina Mitkus with 13.44.

Winning the women’s 3000m in 9:38.42 was Kelly Neely of City of Lisburn AC. Jackie Carty of Kilmore AC won the W45 title; Annette Kealy of Raheny Shamrock proved best in the W50 age group while Mary Martin of Dunboyne AC, who started running through her local Parkrun, was first W70; Martin also won the 800m.

Fastest time overall in the women’s 800m races came from Anne Gilshinan of Slaney Olympic AC winner of the W50 title in 2:21.28.

Winning both the W35 60m and 60m hurdles was Avril Dillon of Dundrum South Dublin AC. Dillon won the 60m in 8.23 secs and the hurdles in 9.71 secs. Fastest men’s hurdles time of the day came in the M45 race won by Aidan Gillespite of Rosses AC in 9.09 secs.

Setting a championships record of 11.81 in the M70 shot putt was Jim McClean of North Belfast Harriers. There was also an M80 record of 10.14 for Frank Stewart of City of Derry Spartans and for Pat Naughton of Nenagh Olympic with a 8.11 effort in the M85 age group.

In the long jump, a 5.24m M50 championships record for Tom O’Brien of Waterford AC was the performance of the day.

Shileen O’Kane of Lagan Valley finished first W50 and fourth overall in the women’s 6km race, with Paul Elliott of Beechmount Harriers and Terry Eakin of North Down AC second and third M60 over the same 6km distance.

Helen Byers and June McMinn, both North Down, were first W40 and W60 respectively, with North Down best of the W35-44 teams.

In the men’s 35-64 8km, Eamon White of North Belfast Harriers finished first M50 and fourth overall, and with his clubmate Neil Carty second M50, NBH finished second of the M45-54 teams; NBH was also second of the M55-64 teams.