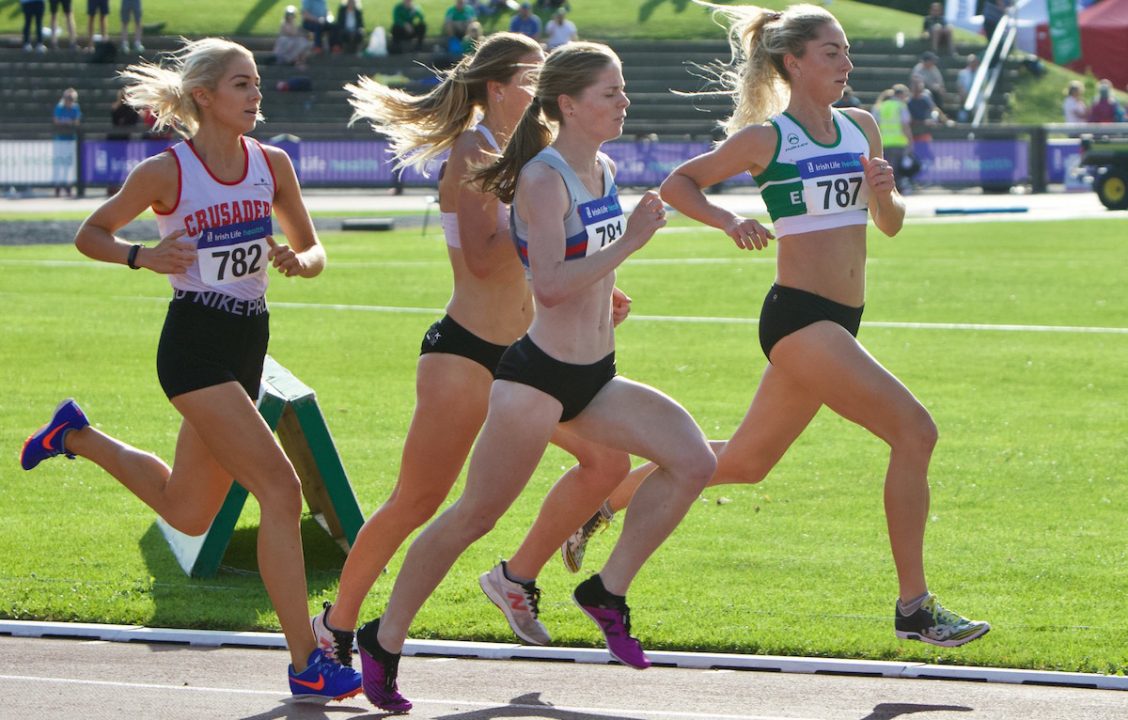 A sizzling time of 11.33 secs from Ciara Neville when winning the women’s 100m proved the highlight of a National Athletics Championships (July 27-28).

In Santry established talent consolidated its position and a number of younger athletes stepped up to the mark with the biggest notable absence being that of Thomas Barr, for the first time since 2011.

For Ciara Neville, it was a first national senior title in a championships best time that puts her second on the all-time list behind Phil Healy of Bandon AC. A fantastic performance.

In the women’s 200m Phil Healy of Bandon AC proved that she’s still the country’s top sprinter. The national star streaked away from the field for a third consecutive victory in 23.82 secs, despite a headwind on the bend.

Sarah Healy of Blackrock AC, who had finished second in the 1500m at the European U20 Championships a week earlier, may be only 18, but she looked every inch an enduring talent with an assured victory in a tactical women’s 1500m. Siofra Cleirigh Buttner of Dundrum South Dublin AC was second and Amy O’Donoghue of Emerald AC third. The same as last year the men’s 5000m proved a thriller with less than a second separating the top three. 12 months ago Hiko Tonosa, the 23-year-old asylum seeker from Ethiopia who runs with Dundrum South Dublin AC, lost out by one-hundredth of a second to Ryan Forsyth of Newcastle AC.

This year, Forsyth could manage only third place behind Tonosa and Conor Bradley of City of Derry Spartans; Tonosa’s winning time was 14:12.41. A close fourth was the vastly experienced Eoin Everard of Kilkenny City Harriers, who has moved up to the longer distances this season.

Other emerging talents winning a first senior title included Sharlene Mawdsley of Newport AC in the women’s 400m with a time of 53.38, where Sophie Becker of St Joseph’s was just half a step behind her. In the men’s shot, Eric Favors of Raheny Shamrock AC, second last year, improved the championships best to 18.64m for the win. Elsewhere in the women’s discus, Niamh Fogarty of Raheny Shamrock AC won her first discus title with 52.96m.

Over the longer distances, experience proved crucial with Fionnuala McCormack of Kilcoole AC making a rare appearance on the track to win the women’s 5000m comfortably in a time of 15 mins 51.97 secs.

In the men’s 10,000m, USA-based Stephen Scullion of Clonliffe Harriers retained his title title in 29:36.33; the time was slower than a year earlier but in much warmer conditions. Finishing second in 29:44.18 for a third year was marathon man Mick Clohisey of Raheny Shamrock who pushed the pace early on. Hard to believe though it is, Mark English of UCD was winning his sixth consecutive title in the 800m, while Ciara Mageean, now with City of Lisburn AC, was adding to her considerable list of achievements with victory in the women’s 800m. Like Thomas Barr, Mageean won her first national title in 2011.

Taking his first steeplechase title was Jayme Rossiter of Clonliffe Harriers, who had clocked a personal best time of 8:46.81 last month. In Santry, a time of 8:59 was enough for him to see off the challenge of young pretender Brian Fay from Raheny Shamrock AC.

In the women’s steeplechase, Michele Finn of Leevale AC ran a championships best time of 9:45.5 not far off the Doha qualifying mark of 9:40.

Showing she was back to full fitness after pulling out of the heptathlon at the European U23 Championships was multi-eventer Elizabeth Morland of Cushinstown AC. Morland not only retained her javelin title with a massive personal best of 46:60m. Morland also finished third in the shot putt with 12.45m, another personal best.

On a good day for multi-eventers, decathlete Michael Bowler of Enniscorthy AC retained his pole vault title with 4.75m.

The Sunday programme ended with a third consecutive victory in the men’s 1500m by John Travers of Donore Harriers. Travers held back until the final 100m when he chased down Andrew Coscoran of Star of the Sea AC to win in 3:49.40.

Notable was the absence of Thomas Barr for the first time since 2011. All in all, an entertaining championships and the good news is that Thomas Barr hopes to be back racing in a couple of weeks time as the count-down to the World Championships in Doha continues.

Just one small quibble: Sunday’s main programme started at 4.25pm and ended at 8pm, leaving athletes and fans who lived in, say Cork, Kerry or Donegal, with a long drive home before facing work the next morning. This was to suit live TV coverage. Surely a “package” of highlights would do just as well – and would allow for a more civilised start time of, say 11am?

Back home from his Canary Island break this weekend was Eoin Flynn of Rathfarnham WSAF AC who won the Duleek 10km in Co Meath on Sunday (July 28) with a time of 32.02. Second in 33.54 was Sean Doran of Clonliffe Harriers, while third and first master in 33.59 was Paul Fleming of Rathfarnham WSAF. First woman was Niamh Devlin of Dundrum South Dublin in 37.16.

Freddy Sittuk was the winner of the Mullingar 10 Mile on Saturday (July 27). Sittuk’s time of 53.45 saw him finished swell clear of Mick Fogarty from Ferbane AC who was second in 54.36. First woman was Grace Kennedy Clarke of Donore Harriers in 64:52.

Winners at the Carton House Trail 6km on Thursday (Jul 25) were Alexander Wallace of St Coca’s AC in 19 mins 47 and Laura Buckley of host club Dunboyne AC in 23:36. On the same evening, Declan Taol of North East Runners AC won the Dublin Airport Central 5km in 16:36, with Orla Timmons of Balbriggan Road Runners first woman in 18:39.

UCD’s Sarah Lavin warmed up for her victory in the 100m hurdles at the National Championships by winning the women’s A 200m in 24.03 at the seventh Dublin Graded Meeting held in Santry on Wednesday (July 24). Winners of the rarely-held Devil Take the Hindmost mile were Andrew Hyland of Raheny Shamrock and Fiona Shine of Crusaders. AC. Just one graded meeting remains.