Irish athletes impress on the track at home and in England 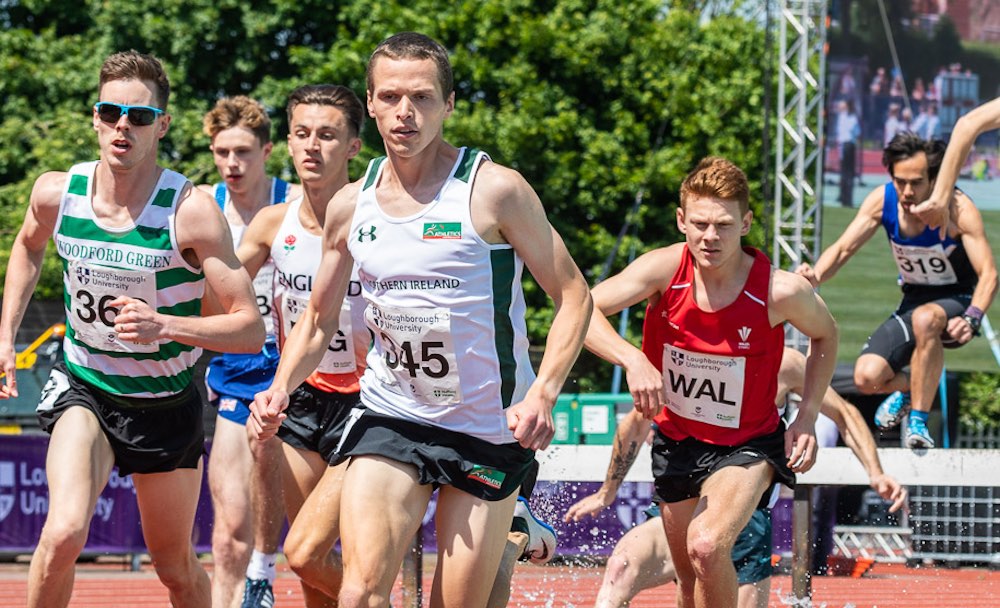 A host of Irish athletes competed in England at leading track events in Loughborough and Highgate, while in Ireland, Schools Championships took place in Leinster and Munster.

After finishing eighth in the event at the Commonwealth Games last month, Adam Kirk-Smith of Derry Track Club won the men’s steeplechase at the Loughborough International on Sunday (May 20).

A large Irish contingent was competing in Loughborough and in the women’s guest 400m, Cliodhna Manning of Kilkenny City Harriers came home first in 54 seconds. Second was Catherine McManus of Dublin City Harriers in 55.28. In a second race, Nessa Millett of St Abban’s, who competes in the European Club Championships division 1 next weekend, finished fourth in 55.97.

In heat 4 of the guest 100m, Gina Akpe-Moses of Birchfield Harriers, the European U20 100m champion, finished a close second in 11.64 secs – not far off her personal best of 11.56 secs set last year and comfortably inside the qualifying standard for the World U20 Championships.

Joan Healy of Bandon AC was third in 11.76 and Sarah Murray of Fingallians AC fifth in 11.98. Finishing fourth in heat two of the 200m series was Niamh Whelan of Ferrybank in 24.76 secs.

The Irish women’s team finished second in the 4x100m behind Great Britain in 44.81 secs; the Irish men’s team was disqualified. In the opening heat of the guest 200m, Marcus Lawler of St LOT registered a European Championships qualifying mark of 20.79 secs when finishing second. Earlier, he had run 10.67 secs in the 100m.

Clonliffe’s Jeremy Phillips, who competes in the premier division of the European Clubs in Birmingham next weekend, finished fourth in the ‘official’ 200m with a time of 21.69 secs.

In the 1500m races, Ciara Everard from Kilkenny finished second of the women in 4:14.79 and Clonliffe’s Jayme Rossiter, who is also selected for the European Clubs, seventh of the men in 3:52.10.

Emma Mitchell of Queen’s clocked a time of 32:55.26 at the Night of 10,000 PBs hosted by Highgate Harriers in London. She finished 16th in the women’s elite race won by the Kenyan athlete Chemtai Lonah Salpeter who lives in and runs for Israel.

In the European Cup 10,000m, which was incorporated into the event, both Irish teams finished sixth of the seven teams entered.

World Junior Championships B qualifying standards for Niamh Fogarty and Ciara Deely proved the highlight of the Leinster Schools Track and Field Championships held over two days in Santry.

Winning the inter 100m and 200m was Rhasidat Adeleke of Presentation Terenure. In the 100m she was pushed hard by Patience Jumbo-Gula of St Vincent’s Dundalk, winning in 11.60 secs, with Jumbo-Gula clocking 11.68 secs; the record is a hand-timed 11.5 run by Michelle Walsh-Carroll in 1978. Star of the boys’ senior competition was Eritrean-born Efram Gidey, a student at Le Cheile Secondary School in Tyrrelstown, who came to Ireland last year after a number of years spent in the Calais refugee camp. On his way to victory in 15 mins 24.43 secs, Gidey lapped the entire field. Over a minute behind for second was David Troy of Castleknock College in 16:38.84.

Double winners included David McDonald of CBS Wexford. He won the 100m in 10.82secs and also the 200m in 21.66 secs, despite a ferocious -3.2m/3 wind. Ciaran Carthy of St Michael’s at inter level and Jack Mitchell from Pres Carlow at senior level both notched up 400m and 400m hurdles doubles

Northern Ireland athletes Leon Reid and Jason Smyth both had victories over the rarely-run 150 metres at the Great City Games in Manchester on Friday evening (May 18).

Paralympian superstar Smyth clocked 15.82 secs to take an emphatic victory in the T13 race, while Reid produced a strong finish to win his race in 15.52 secs.

Reid, who won a first athletics medal for Northern Ireland since 1990 at last month’s Commonwealth Games, is hoping that his long-awaited transfer from Britain to Ireland will finally come through in time for the European Championships in Berlin.

Dan Tanui of Derry Track Club was the winner of the Streets of Dublin 5km held around Dublin’s docklands on Sunday (May 20). Tanui finished in 14 mins 53 secs, inflicting a rare defeat on his fellow countryman Peter Somba of Dunboyne AC. Joseph O’Donohue of Crusaders AC was third. First woman was Maria Jones of Sportsworld AC.

In his second race in two days, Bantry’s Alan O’Shea won the River Moy Half Marathon in Ballina, Co Mayo, with a time of 68 mins 39 secs on Saturday (May 19).

O’Shea proved the class of the field winning by close to four minutes from local athlete Michael Canty. Heather Foley of North Sligo AC was the first woman in 85 mins 49 secs, with Colette Tuohy of Mayo AC second and first W45 in 89:45.

Peter Somba of Dunboyne AC was an emphatic winner of the Simon Cumbers and Paddy Hyland 6km, held in Navan on Friday evening (May 18).

Somba finished in 18 mins 30 secs with Raheny’s Brian Leahy over a minute behind for second. The first woman was Sinead Lambe of Donore Harriers in 22 mins 5 secs. Bohermeen’s Andrea McGuinness was second and first W40.

Bantry’s Alan O’Shea was the winner of the annual – and unique – Cheetah Run 5km held in Fota Wildlife Park, Co Cork on Thursday May 17. He finished in 15 minds 18 secs with Tim O’Connor of An Riocht AC second in 16.14. Aoife Cooke of Youghal AC was first woman in 18 mins 7 secs. Leevale’s Carol Finn was second.

Annette Kealy of Raheny Shamrock proved the star of the Irish team at the European Masters Road Championships in Alicante, Spain, when she won the W50 10km in 38.04.

That time would have won her the W45 title as well. Tommy Payne of Tinryland M60 and Evelyn McNelis of Naas AC W70 both finished fourth while Jackie Stamp of Kilmore was fifth W45.

Best of the Irish in Sunday’s half marathon was James Doran of An Riocht AC who finished sixth overall in 72 mins 35 secs.

TT Racers, a group of runners who train at lunchtime in Trinity College with coach Terry McConnon, won the annual Wicklow Way Relay for a record third consecutive year on Saturday (May 19).

TT Racers made a good start to the race and were leading until the fifth of eight legs when a navigational error saw previous winners Rathfarnham WSAF take over in front. Only on the 22km seventh leg did TT Racers pull ahead again, thanks to the efforts of Des Kennedy.

It was then left to Linda Byrne to bring the team home in an overall time of 7 hours 23 minutes. Second was Rathfarnham in 7 hrs 31 mins, while third was Crusaders AC in 7 hrs 55 mins. All 35 teams finished the relay.