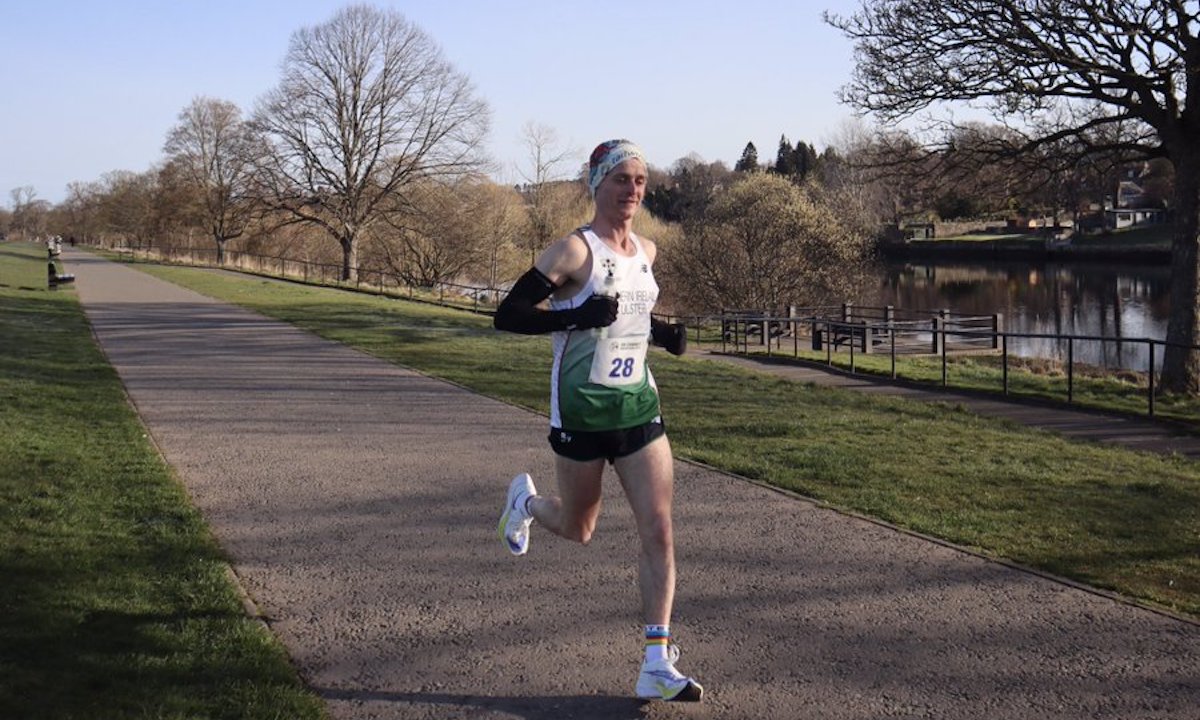 From half marathons in Barcelona & Berlin, marathons in Manchester, Italia and the Channel Islands and a 100k in Perth (Scotland, not Australia), Lindie Naughton brings you all the action.

Tokyo Olympian Aoife Cooke of Eagle AC knocked three minutes off her half marathon personal best time when she finished in 70 mins 53 secs at the Barcelona Half Marathon on Sunday (April 3).

Paul O’Donnell of Dundrum South Dublin AC and Grace Lynch from Iveragh AC had travelled to Berlin for their debut half marathons on the same day. In the men’s race, O’Donnell clocked a time of 64:46, while Lynch finished in 73:50. Other Irish were also in action including Caoimhe Nic Fhogartaigh of London City AC who was second W45 in 82:47.

At the Manchester Marathon, also on Sunday, Kevin Seaward of St Malachy’s AC, like Cooke a Tokyo Olympian, finished third in 2:10.46 — not far off his personal best of 2:10.09 set in 2020, which qualified him for the Olympics. Good news for Seaward is that his time is inside the qualifying marks for both the World and European Championships later this summer.

Finishing first W45 in Manchester was Gladys Ganiel of North Belfast Harriers in 2:41.46 and Tommy Hughes of Strive RC ran 2:30:05 and was first M60 in Manchester in a world best for the age group.

In Italy, Alex Wallace of St Coca’s AC in Co Kildare won the Lake Garda Marathon in 2:22.48. Last October, Wallace finished second with a time of 2:45.24 in the Virtual Dublin Marathon.

Another Irish winner over the weekend was Dessie Burke of Ballina AC, who made the ITV News when he won the Guernsey Marathon in the Channel Islands; the only time give was 2:40. All race finishers got a wooden medal!

Closer to home again, Fionnuala Ross of Armagh AC (and Shettleston Harriers) finished second woman at the Tom Scott Memorial 10-Mile in Glasgow, Scotland, with a time of 56 mins 35secs.

Reigning national 5,000m champion Aoife Kilgannon knocked a minute and eight seconds from Michelle Finn’s course record when taking the honours at the Sonia O’Sullivan 10-miler at Cobh in a time of 56:19 writes John Walshe.

The Sligo athlete, who ran 55:42 for the distance two months ago when winning at Trim, had almost nine minutes to spare over unattached runner Jean Lucey, who finished in 65:07 with Leevale’s Joyce Wolfe a further five seconds back in third.

Marathon man Mick Clohisey of Raheny Shamrock AC , returning from injury, had to give best to Ger Forde of Kilkenny City Harriers who broke away on the long hill up to Ballymore and continued to increase his lead to cross the line in 50:37, well outside Sean Tobin’s impressive record of 48:34.

Clohisey recorded 51:01 cor second place with Bantry doctor Alan O’Shea, the inaugural winner of the Cork City Marathon back in 2007, showing he is still a force to be reckoned with when clocking 51:50 for third.

Over 630 runners finished the challenging course on a day which started out chilly but warmed up as the race went on. And the lady in whose honour it is held, local heroine Sonia O’Sullivan, showed that the competitive flame burns as brightly as ever when taking the W50 category in 72:08. At the Omagh Half Marathon, the in-form Sergiu Ciobanu of Clonliffe Harriers led home 1,427 finishers in 67 mins 17 secs. Ciobanu, returning to the race after a break of nine years, was winning it for a third time. Local athlete Eoin Mullan of Omagh Harriers was second in 68:47 and Gary O’Hanlon of Clonliffe Harriers third and first M45 in 69:16.

First woman was Annmarie McGlynn of Letterkenny AC in 82 mins 41secs, who was using the race as her weekly long run. Grainne O’Hagan of Knockmany RC was second woman in 83:24 and Michelle Donnelly third in 85:56.

In Belfast, Aaron Woodman of Willowfield was the winner of the Titanic 10km with a time of 32 mins 30 secs. Annadale’s Chris Hutchinson was second in 32:40 and Gareth Lyons of North Belfast Harriers third and first M40 in 32:41. Fourth and first junior in an impressive time of 32:49 was Diarmait Keogh of Finn Valley AC.

A quality women’s race saw Sorcha Nic Dhomhnaill of Donore Harriers breaking away to beat North Down’s Jessica Craig by just five seconds; Nic Dhomhnaill finished in 33:58 and Craig in 34.03. Third in 34:25 was Ide Nic Dhomhnaill, Sorcha’s younger sister, while fourth in 34:50 was Catherine Whoriskey of City of Derry Spartans.

Winners of the 5km were Gerard Gallagher in 16:03 and Natasha Kelly in 17:32, both Finn Vally AC members.

More road races than you can shake a stick at

Winner of the Straffan 10km in Co Kildare were Mark Ryan of Rathfarnham WSAFAC in 32:22 and Sheila O’Byrne of Parnell AC in 37:27. Conor Murphy and Niamh McDonald were first home in the 5km with times of 16:03 and 19:44 respectively.

A day earlier at the Dublin City Council BHAA 4-Mile in Raheny, Sean Doran, from Harrier Products, was the winner in 20 mins 9 secs. Eoin Callaghan, of the Teachers team, was second in 20:42 and Cathal McHale from Bank of Ireland third in 21:06.

Laura McDonnell was twelfth overall and first woman in 23:12, followed by Laura Buckley of the Teachers team and Zoe Quinn. A mixed Teachers team, with Callaghan and Buckley backed up by Peter Casey, won Grade A ahead of Bank of Ireland. Health Ladies, led by Mary Watters, proved best of the women’s teams. Next BHAA race in Dublin is the Sandymount Beach 5km on Tuesday, May 17 – not to be missed!

Gareth King set a new All Ireland record of 6 hours 47 mins 33 secs when finishing fourth at the Anglo-Celtic Plate 100km in Perth, Scotland, on Sunday (April 4).

His time knocked almost 25 minutes off the 7:12.30 he clocked on his 100km debut at last year’s Anglo Celtic Plate hosted by Ireland in August at Mondello Park in Co Kildare. King, from Tandragee, was representing NI and Ulster.

Reporting from the ground from Fast Running editor Robbie Britton said that “Gareth looked one of the most composed and comfortable on the course throughout the entire race and stormed up the rankings in the final stages. A fantastic run.”

The Irish women couldn’t repeat their famous victory of last August finishing third of the three teams. Making up the team were Patricia McLoughlin 8:36.25, Anne Jennings 8:57.24 and Deirdre Martin 9:07.15.

Winner of the Dublin to Belfast Ultra on Friday (April Fool’s Day!) into Saturday was James Bennett who made the 103-ish mile trip in 19 hours 27 minutes. Second in 19 hrs 50 mins was Daniel Smithwhite while third in 20 hrs 13 mins was Baz Buckland.

Middle distance track performance of the weekend came from Micheal Power of West Waterford AC who ran a personal best 13:29.57 for fifth place in the 5,000m at the Stanford Invitational in California. The time was comfortably inside the European Championships B standard for 5,000m of 13 mins 34 secs.

Also worth recording — even if it’s way shorter than our usual distances! — is a blisteringly fast time of 22:59 for 200m recorded by Rhasidat Adaleke of Tallaght AC at the Texas A&M meet on Saturday (April 2). If it’s recognised, it will break her own Irish record of 22.90 secs set last July.