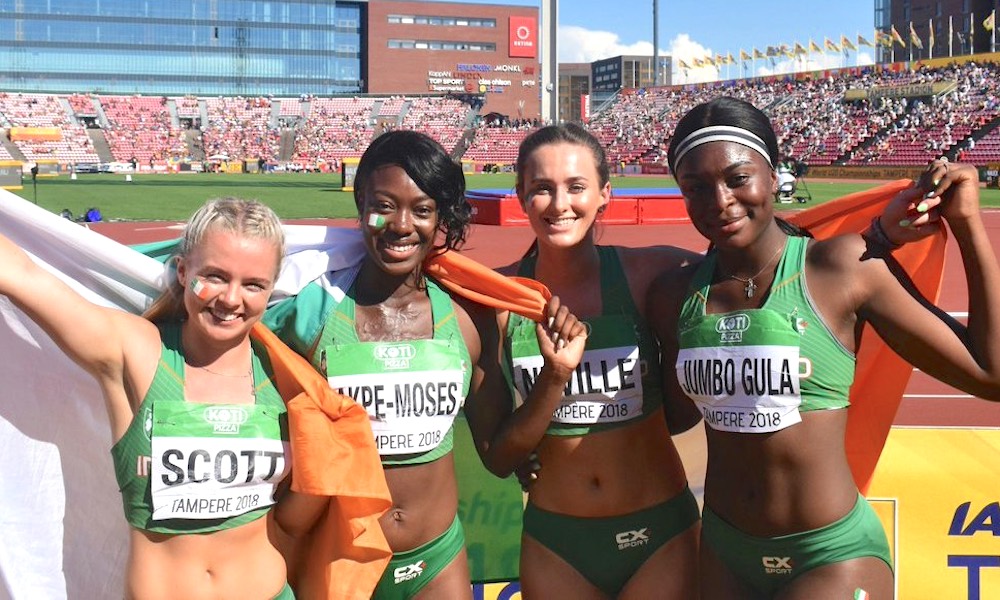 The Irish women’s 4x100m relay team not only won silver medals but set a new national U20 record of 43.90 seconds at the World U20 Athletics Championships in Tampere, Finland on Saturday (July 14).

The quartet of Molly Scott (SLOT), Gina Akpe-Moses (Blackrock-Louth), Ciara Neville (Emerald) and Patience Jumbo-Gula (St Gerard’s Dundalk) struck silver narrowly behind the Germans who ran 43.82 with Great Britain third in 44.05. Rhasidat Adeleke (Tallaght) had a hamstring injury which prevented her from making the final.

It was only the third Irish medal at this level and the first relay podium placing. On Sunday, Sommer Lecky (Finn Valley) won to a superb silver medal in the high jump with a national U20 record of 1.90m.

Finn Valley’s Lecky was in sensational form all week and narrowly missed out on clearing 1.92m. Ireland had only ever won two medals at previous world U20 championships and they have now doubled that tally.

A lightning fast boys U17 100m with three boys under 11 seconds was just one highlight of at the second day of the National Juvenile Athletics Championships in Tullamore on Sunday (July 15).

In windy conditions, Michael Farrell of Raheny Shamrock was the winner in 10.82, followed by his Raheny club mate Sean L’Estrange in 10.90 and Cillian Griffin of Tralee Harriers in 10.99. Winning the U19 title with 10.99 was Shane Monagle of Tramore AC, while setting a new U19 girls 100m record of 12.03 was Lauren Cadden of Sligo AC.

In the U17 boys’ javelin, Conor Cusack of Lake District Athlete threw a record 58.35m for victory. There was also a record in the U16 girls’ shot of 14.14m for Aoibheann McMahon of Blackrock Louth. Another in record breaking form was Ellen McNally, of Greystones and District, who won the girls’ U17 triple jump with a 10.70m leap in the final round.

A day earlier, in kinder weather conditions, Louis O’Loughlin of Donore Harriers was a runaway winner of the U18 boys 800m in a new record time of 1:52.13.

The highlight of the girls’ 800m races was an U16 championships record of 2:11.63 from Aimee Hayde of Newport AC who dominated the race. Almost as fast in the U15 final was Emma Moore of Galway City Harriers who ran a time of 2:11.98 to smash Hayde’s record of 2:15.63. Sarah Hosey of Dooneen AC and Fiona Dillon of Thomastown AC were also inside the old record. In the high jump, Aoife O’Sullivan of Liscarroll AC soared over 1.72m to equal Sommer Lecky’s record in the U16 girls’ high jump.

In a competitive girls’ U18 long jump, Sophie Meredith of St Mary’s Limerick came out on top with 5.85m, beating Ruby Millet of St Abban’s who jumped 5.79m.

Roisin O’Reilly of Menapians AC knocked a massive sixteen seconds off the previous record when winning the girls’ U17 2000m steeplechase in a time of 7:06.73

Freddy Sittuk was the winner of the Irish Runner 10-Mile held in Dublin’s Phoenix Park on Saturday (July 14). Sittuk finished in 52:43, with his Raheny Shamrock teammate Cillian O’Leary second in 52:56. Third was Tomas Fitzpatrick of Tallaght AC in 53:59.

Letterkenny’s Caitriona Jennings was first woman in 61:21, followed by Karen Alexander of Acorns AC 62:09 and Tara Kennedy-Monks of Raheny Shamrock in 64:00.

Rathfarnham’s Paul Fleming won the Dunleer 4-Mile on Sunday (July 15) in 21:37, with Catherina McKiernan of Annalee AC eighth overall and first woman in 22:45.

At the Youghal 5km on Thursday evening (July 12) Ferrybank’s Andrew Connick was first home in 15:36 with Aoife Cooke of the host club Youghal AC first woman taking her third successive victory in 17:30.

Zak Hanna of Newcastle and District won the Irish trial for the World Mountain Running Championships at Crone Woods in Co Wicklow on Saturday (July 14). The championships take place in Andorra in September.

Earlier this month, Hanna was best of the Irish at the European Championships in Macedonia where he finished 19th.

Joe Gough of West Waterford AC was in record-breaking form again at the Drogheda and District graded track meet last Thursday (July 12) when he shattered the Irish M65 record with a time of 4:55.10. The previous record of 5:08.87 was held by Willie Neenan of Cork.

That’s the Irish outdoor 400m, 800m and 1500m records broken by Gough so far this year. His major target this season is September’s World Masters in Malaga, Spain.

Although he didn’t break the four-minute barrier, proud Tipperary man Sean Tobin of Clonmel AC ran a time of 4:04.48 to win the men’s mile at the Moyne AC 70th Anniversary Games, held on the club’s newly laid four-lane track on Thursday evening (July 12). Tobin was on his own from 800m after the efforts of pacemaker William Hughes of Thurles Croke and was followed home by Damien Landers of Ennis TC who crossed the line in 4:14.99.

Target time in the women’s 800m was 2:05:00 and Amy O’Donoghue of Emerald AC came close, running a time of 2:06.57, which was just off her fastest ever time. Pushing O’Donoghue hard from the start was Stephanie Cotter from West Muskerry AC who was rewarded with a personal best time by three seconds of 2:07.24. There was also a personal best of 2:14.16 for Leevale’s Annette Quaid.

A 400m personal best of 49.25 for race winner Robert Bennett of Nenagh Olympic was another highlight of the meet. All athletes who competed were presented with a specially engraved medallion celebrating the club’s 70th anniversary.