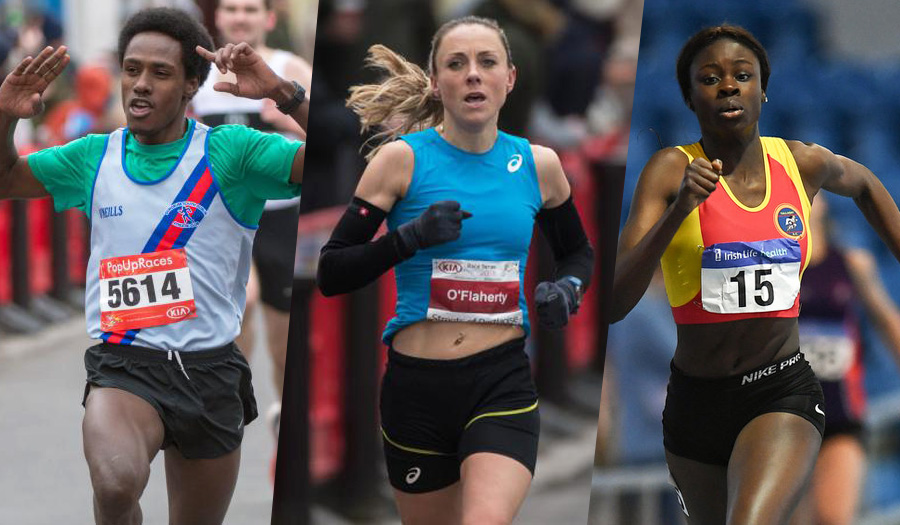 Hiko Tonosa and Kerry O’ Flaherty were the winners amongst a top class field at the Portlaoise 5km, while 15-year-old Rhasidat Adeleke stole the show in Athlone.

First of the master men was Keith Shiels who was eighth overall in 15 mins 29 secs.

The race was the opening round of the Kia Race Series which aims to get the top road runners in the country racing each other in a series of eight races between now and September. Close to 700 completed the race.

Winners at the Mullingar Half Marathon were local athlete Johnny Daly in 72 mins 21 secs and Maria McCambridge of DSD in 78 mins 59 secs. A comfortable winner of the Balbriggan Cancer Support Half Marathon was Eoin Callaghan of Star of the Sea in 72 mins 26 secs.

John Travers of Donore Harriers and Theresa Doherty of Finn Valley came out on top at the 45th annual Tubbercurry 10km.

With ‘Baby Beast’ blowing snow all over Dublin and the east coast on Sunday, the St Patrick’s Festival 5km was cancelled. Away from the snow, the Tralee Marathon in Co Kerry was won by ultra man Alex O’Shea of St Finbarr’s in 2:38.22.

First woman was Dolores Duffy of Watergrasshill AC in 3:12.43. First home in the half marathon was Brian Murphy of Ennis TC in 77 mins 54 secs. Shona Keane was first woman in 85:37.

Rhasidat Adeleke of Tallaght AC produced the sprint performance of the day at second day of the Irish Juvenile Indoor Championships in Athlone on Sunday (March 18).

Adeleke, who took 200m silver at the European Youth Olympic Festival last summer, ran 7.43 secs to smash the girls’ U17 record of 7.51 secs set by Ciara Neville. In the heats, Adeleke had also run 7.53.

The 15-year-old Tallaght sprinter is now 12th on the Irish all-time list.

Also in record-breaking form was Israel Olatunde of Dundealgan AC ran a new championships best of 6.98 secs, in the heats of the boys U17 60m and took the title with a time of 7.04 secs, which was also inside the old record of 7.07 secs.

Aimee Hayde of Newport AC ran a time of 4:28.76 for victory – again by some way the fastest of the day over all age groups. A clear winner of the U18 title was Louis O’Loughlin of Donore Harriers who finished in 4:01.87; second was Brian Maguire of DSD in 4:06.06.

In the girls’ U16 shot, there was a new championships record of 14.67m for Casey Mulvey of Innyvale. Also in record-breaking form was Matthew Callinan Keenan of St LOT who soared over 4.26m to win the boys’ U19 title.

In the U17 age group, Moycarkey Coolcroo’s Adam O’Dwyer 3.71m effort was also a new record.