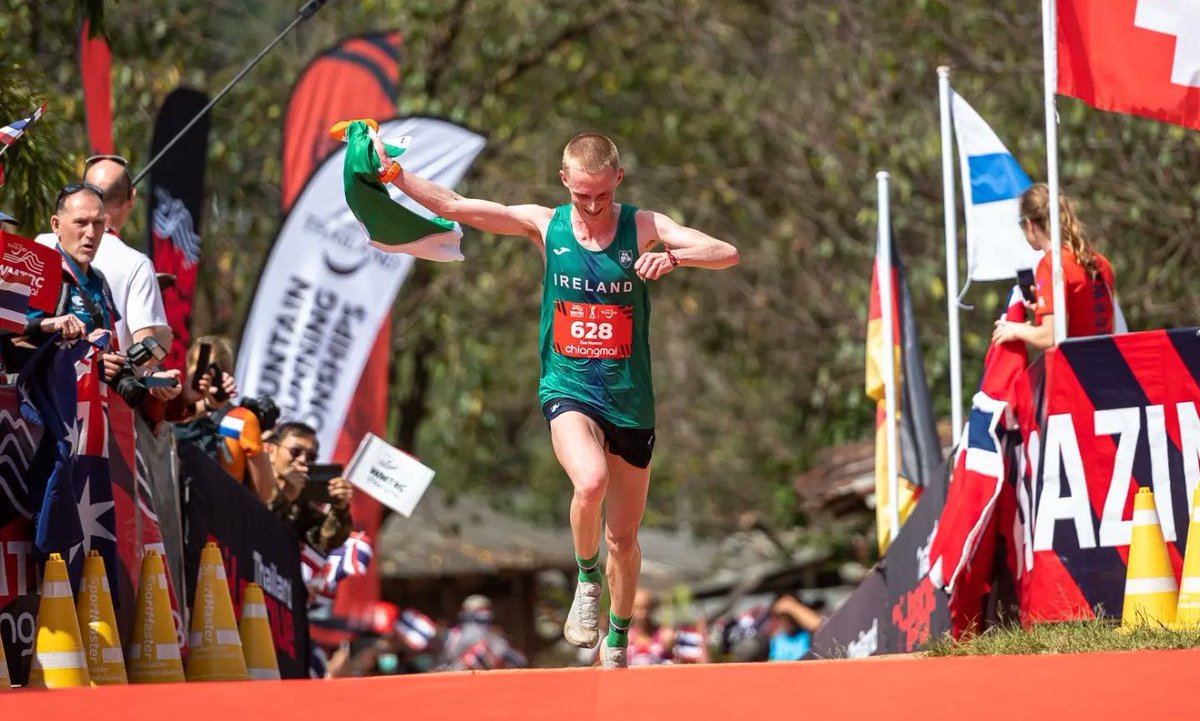 There was an absolutely fantastic result in Thailand, strong running at the cross-country at home and even more action still. Lindie Naughton reports.

Zak Hanna finished a magnificent fifth in the men’s uphill kilometre race at the World Mountain and Trail Running Championships, held in Chiang Mai, Thailand over three days from Friday until Sunday, November 4 to 6.

Hanna was competing on Friday and in warm, humid conditions, completed 8.5km route in 49 mins 32 secs. It was a best Irish male result since John Lenihan won a World Championship title after victory in Zermatt, Switzerland 31 years ago.
Patrick Kipngeno of Kenya made the decisive break late on to claim the gold in 45.51 for a first Kenyan win in the event.

Said Hanna afterwards: ‘Going into the race I was aiming for top 15, however fifth in the world is just amazing. I remember my first World Championships in 2016 when I was 76th, and it’s just been a steady ladder of progress until now.’

In the ‘up and down’ race on Sunday, Sarah McCormack finished 21st, gaining one place in the second half of the 10.7 km race to finish in 52 mins 47. Rebecca Cheptegai of Uganda was the race winner in 46:25; Britain’s Scout Adkin finished a fighting fifth in 50:19.

Incorporated in the championships for the first time were trail races over 38km and 78km. Finishing 40th in the longer of those two was Paddy O’Leary in 8 hrs 41 mins 59 secs. Winner was the American Adam Peterman in 7:15.53. A smiling Efrem Gidey of Clonliffe Harriers was the runaway winner of the senior men’s race at the Dublin. Cross-Country Championships held at Saggart on Sunday (November 6)

Gidey lapped a large percentage of the field on his way to completing the 10km distance in a time of 31 mins 22secs.

Behind him, Emmet Jennings of Dundrum South Dublin AC, Pierre Murchan of Dublin City Harriers and Ian Guiden of Clonliffe Harriers traded the lead several times in the battle for second place.

Towards the end of the final lap, Murchan sprinted past Jennings and took the silver by a second, with the pair timed at 32:10 and 32:11 respectively.

Guiden finished fourth in 32:18, and with Sean O’Leary finishing fifth and Sergiu Ciobanu ninth, Clonliffe were comfortable winners of the team title with 19 points. Second on 50 points was Raheny Shamrock AC with Dundrum South Dublin AC third on 57 points. In the women’s senior race over 6km, Niamh Kearney of Raheny Shamrock AC and Meghan Ryan of Dundrum South Dublin AC battled it out at the front after Dublin City Harriers pair Jodie McCann and Faye Dervan had pushed the early pace.

In the end, Kearney took the victory in 22 mins 1 secs, with Ryan second in 22.07. With Dervan, third in 22:26 followed by McCann fourth, Alison Armstrong sixth and Cliona Murphy seventh, DCH took the team prize ahead of DSD and Raheny Shamrock.

In the junior women’s 4km, DSD took its only individual victory of the day, with Eimear Maher showing a welcome return to form to win comfortably in 15 mins 6 secs. Eve Noctor of Lucan Harriers was second in 15:41 and Ellen McLoughlin of Metro St Brigid’s AC third in 15:48.

After a sprint for the line, Louis Woodger of Metro St Brigid’s AC won the junior men’s 6km with a time of 19:58. Raheny Shamrock AC’s Shane Spring finished on his heels in 19:59. Eanna Ó Bradaigh of Dundrum South Dublin AC was third in 20:11. DSD took the team titles in both junior races and indeed was the only club to take team medals in all four races.

With its traditional home of Santry Demesne not available, the races were held beside a golf course at City West in Saggart. The venue, discovered by members of Tallaght AC, proved a big hit, easily accessible off the Naas dual carriageway and with ample parking. With access to almost all public parks in Dublin proving tricky these days, let’s hope the venue can be used again.

Golf clubs the style for the weekend

In the men’s 10km race Forde was the clear winner in 34 mins 55 secs. Second was Philip Marron of Ratoath AC in 35:42 while third was Sli Cualann AC’s Joe Dowd of in 35:58. Dowd was leading Sli Cualann AC to team victory over Tullamore Harriers and Kilkenny City Harriers.

In Stranorlar, Co Donegal on Saturday (November 5) , Gary Crummy of Newry AC won the men’s 6km race at the NI and Ulster Novice Cross-Country Championships leading from the gun and finishing in 19 mins 48 secs. Oisin Toye of Finn Valley AC was second in 20:11 and Peter Gracey of Beechmount Harriers third in 20:18.

Due to circumstances beyond the organisers’ control, the McConnell Shield Cross-Country scheduled for Ballyclare, Co Antrim on Saturday (November 5) was cancelled.

Winner of the women’s race at the second day of the Connacht Cross-Country Championships hosted by Drumshanbo AC on Sunday (November 6) was Fiona Gettings of Longford AC.

Gettings was also first W35 and indeed the top eight finishers in the race were all masters. Second was Michelle Lannon of Carrick-on-Shannon AC , while third and first W50 was Mari Johnson of Sligo AC. Fifth and first W65 was Pauline Moran of Sligo AC. First senior woman in ninth place was Valeriia Petrova of North Sligo AC, while Susanne O’Bernie of North Leitrim AC was first novice. Mayo was first county team.

David Callaghan of Tallaght AC and Kate Kelly of Athlone AC were the winners of the 10-mile race at the Corofin Loops in Co Galway on Sunday (November 6). They finished in times of 56 mins 4 secs and 60:53 respectively. Former Irish marathon International and world masters champion Christine Kennedy of Galway City Harriers was first W60 in 72:47.

In the associated 8km, Michael Canty of Moy Valley AC was the winner in 27:44, with Emma Rowe of Galway City Harriers first woman in 31:54.

At the Run to Remember 5km in Ballynahinch, also on Sunday, Tom Crudgington of NewcastleAC was the winner in 17 mins 50 secs. Fourth overall and first woman was Kelley Haniver of Willowfield in 21:19.

Ryan Creech of Leevale Ac won the Leicester Half Marathon with a time of 66:32 on Sunday, October 30.

On the USA college circuit, Jane Buckley of Leevale AC won the women’s title at the Big East Cross-Country Championships held in Highland Park, Massachusetts on Saturday, October 29. She was only the second freshman ever to have won the event and her strong performance has already put her in contention for a place on the Irish U20 team for the Spar European Cross Country Championships in Turin, Italy on December 11.

In the men’s race, Charlie O’Donovan, like Buckley from Leevale AC, finished fifth and helped the Villanova men, coached by Marcus O’Sullivan, to their eighth conference title.

* Still no confirmed results from the Irish Marathon Championshisp held in conjunction with the Dublin Marathon on October 30, although we definitely know that former champions Mick Clohisey and Sergiu Ciobanu did not finish, despite being listed in the original results.

Considerable confusion has resulted from the transfer of numbers from 2020. Of the original 25,000 sell-out entry for that year’s cancelled race, about 18,000 ended up collecting their race entry, while 14,773 are listed as official finishers. Numbers were also unofficially transferred, adding to the difficulties. Full official results when we get them.