Great domestic racing as world records tumble – weekend round up 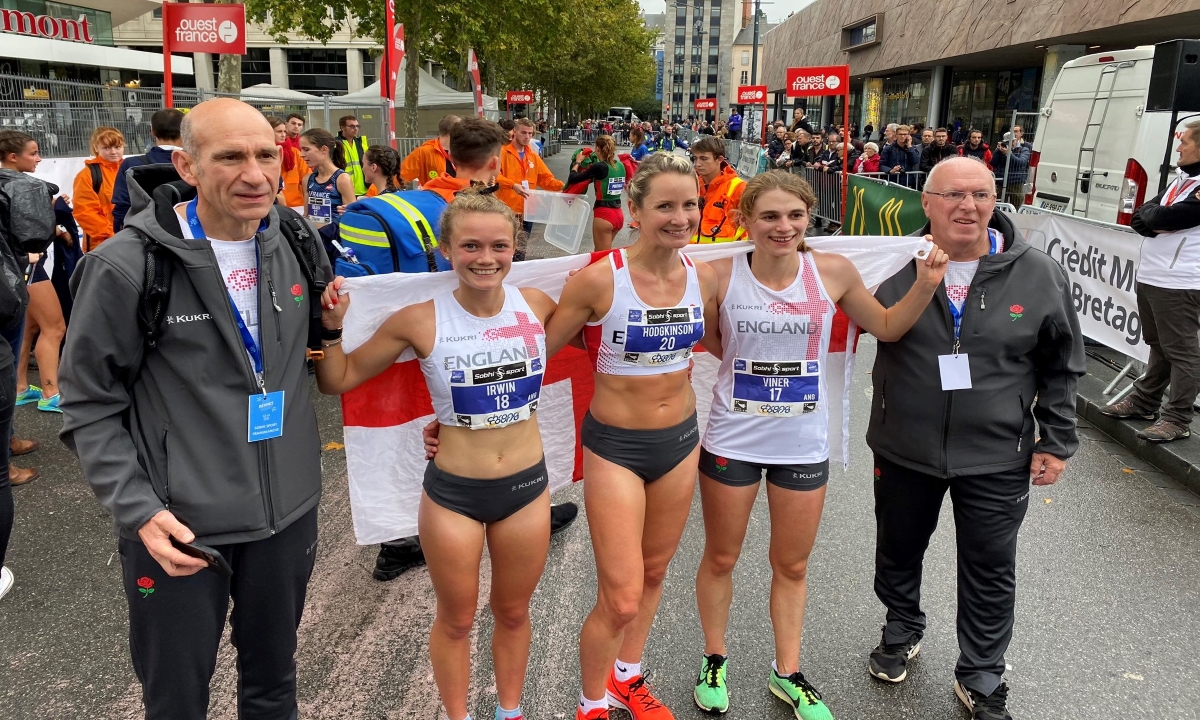 World Records, official and unofficial. What a weekend.

This weekend is one that will be remembered for a long time to come in running circles. There’s not much to say about the astounding achievement of Eliud Kipchoge that hasn’t been said but whether you think it was a vanity project or the equivalent of going to the moon, there’s no doubt that things change as a result of this barrier-breaking run.

What remains to be seen is how much and how soon the knowledge that sub-two is possible has an impact on those running at the highest level on the roads. With Bekele nipping at the heels of Kipchoge’s time in Berlin, what does the future hold for the official world record? Exciting times are ahead.

After a somewhat tumultuous couple of weeks in the world of athletics there is a wry irony in the fact that the company that had caused many to doubt their sport has now become the reason that many are feeling inspired again.

Brigid Kosgei wasn’t about the let the gents hog the headlines either. In less than perfect conditions Kenya’s second record breaker of the weekend showed us all at Chicago Marathon that we shouldn’t underestimate her. After her compatriot’s efforts just one day previous, much was being made online of how the women’s equivalent to breaking two hours was the 2:15:00 barrier.

With her 2:14:04 Kosgei obliterated that barrier and has made us all go back to the mental drawing board on what the next target should be. Talking of barriers, Ireland’s Fionnuala McCormack smashed her PB barrier to run an Olympic Qualifying time of 2:26:47 and take 5th (after an 11th at Boston in April). Can we get a photo?

A tough day for Farah

Salazaar-coached athletes featured heavily in the elite lineup of Chicago and Mo Farah, whilst now until the tutelage of Gary Lough, had plenty of questions asked of him before stepping up to defend his title. At 15k Mo was already 10s behind the lead group and just wasn’t able to execute his normal strong finish.

Whether the distractions of the past week were to blame or other factors, who knows. With the wind worsening throughout the race he had to settle for 8th place in 2:09:58. In the end it was Lawrence Cherono who add a second World Major win to his 2019 after his Boston victory earlier in the year.

Slightly less attention grabbing, but a hat-tip must go to Richard White in 2:40:06 who placed 9th at Koln Marathon in 2:40:06. Melbourne Marathon results are tbc.

Back in the UK our resident athletes were turning up the speed over a variety of distances and terrains this weekend.

The Great Birmingham Run Half Marathon had to be shortened due to a suspicious vehicle being left on the course. Across the shortened course Hayley Carruthers (Birchfield) was the winner with 1:02:09 leaving plenty of clear road between her and Tonbridge’s Lucy Reid (1:03:34) and AFD’s Laura Gent (1:05:54)

We are not 100% sure of the final race distance but Birchfield Harrier’s Omar Ahmed upgraded his silver spot last year to nab top spot in a winning time of 52:18. Doug Musson was a few minutes behind in 55:33.  A fast podium was finished off my William Mycroft (Enfield & Haringey) in 56:41.

First back to the crease at Lancashire CCC this weekend were Ben Connor (Derby) and Lily Partridge who completed the Manchester Half Marathon in 1:03:11 and 1:13:45 respectively.  Following Ben home was Wayany Gherbeilasie (Shettleston Harriers) in 1:04:06 and Frank Baddick (Newham and Essex Beagles) in 1:04:18. Chasing Lily round familiar streets was locally based athlete Jip Vastenburg (New Balance Manchester) who took second place in 1:14:18. Third went to Elinor Kirk of Swansea Harriers in 1:16:13.

Our elite winner is through the finish line!

Congratulations to Ben Connor with a time of 1:03:11 🥳#mcrhalf pic.twitter.com/gXoBKvyrVE

Alex Milne was a comfortable winner of Oxford Half Marathon where he clocked 67:31 to see off Seyfu Jamaal (68:24) and Ewan Cameron (68:30). Stephanie Davis absolutely dominated the women’s race to run a huge PB of 72:57 in one of the performances of the day by British athletes. Mel Wilkins was 2nd in 77:21 and Rachel Felton 3rd in 78:26.

Tom Merson (Exmouth Harriers) ran to a convincing victory at the Great West Run in Exeter, his 1:07:03 a good five minutes ahead of his nearest competitor, Jordan Andrews (Tavistock Run Project), who finished in 1:12:48. A little closer but still safely behind was Michael Sandiford in 1:14:51. Carys Hughes of Cardiff AAC lead the ladies race in 1:20:45 and was similarly untroubled by second place. That spot went to Serane Stone (Tiverton Harriers) in 1:23:22 and third was taken by Rachel Bunting (North Devon Road Runners) in 1:26:17

In London, Extinction Rebellion heeded the organiser’s pleas not to disrupt the Royal Parks Half Marathon leaving the race to go ahead as planned, to the benefit of Georgie Fenn who finished first lady in 1:22:09. First male was james Hoad in 1:06:48. Further results tbc.

The AVR Wiltshire Half Marathon was won by Matthew Walters in 1:21:57 and Laura Midwinder in 1:36:28

A day of disruption at major races

Great things were expected from the British field at the Great Eastern Run, Peterborough. However, frustration not PB’s was the order of the day for organisers and athletes alike as the event had to be cancelled due to a Police incident.

GER tweeted “In the interest of safety for our participants we took the decision to cancel the half marathon half an hour after its original start time because of Police information that a man was acting suspiciously close to the route.”

Sitting alongside the incident at the Great Birmingham run it was an odd day for major British road races.

Ross Millington and Adam Craig had impressive run outs at the 4 Mijl van Groningen race in the Netherlands. Millington finished 6th in 18:10 and Craig 11th in 18:25. Karl Darcy was also racing, finishing 24th in 19:19.

The mountain racers were in action in Ljubjana at the Smarna Gorna Mountain Race and it was the race that saw Sarah McCormack and Andrew Douglas lift the 2019 Mountain Running World Cup titles after a season of fabulously consistent racing for the Irish and Scottish athletes.

In 10k land England Athletes were in action at the Rennes 10k – a technical course of 1km laps. The women finished with a fabulous 1-2-3 with Danielle Hodgkinson (34:54) winning the race followed by Fast Running’s Hannah Irwin (35:13) in second and Hannah Viner (35:15) in 3rd.

We believe there was a Scottish team competing as well and are awaiting results. Back in blighty, Charlie Hulson was in fine form at the Farndon 10k, dipping under 30 to take top spot in 29:56. Daniel Cliffe was next in a nice round 32:00 and Raif Serif took heed of the two minute-gap memo to finish third in 34:20. Swift ladies were out on the course too, with 37:11 being the required time to take first for Joanna Marsden. Becky Lewis managed to hold onto the sub-40 dream, bringing home silver in 39:46 and Gemma Barnett was third in 40:22.

With this Saturday heralding the start of the Cross Country season in the UK it feels apt that the top story of the week was a team effort, with the aforementioned Kipchoge so quick to acknowledge the importance of his team of 41 pacers and countless support staff . Cross Country turns our generally solo sport of running into one of squad-goals, with clubs all over the nation donning their vests and spikes to hurtle round boggy fields for points and placings.

Kicking us off in our trip around the mud-splatters is the first of the British Athletics Cross Challenge series which took place in Llandaff fields, Cardiff. Kicking off the series in winning style was Charlotte Arter (Cardiff AC), followed by Jenny Nesbitt (Cardiff AC) and Iona Lake (City of Norwich). The Senior men’s opening title went to Marc Scott (Cambridge & Coleridge AC) who was chased in by Mahamed Mohamed (Southampton AC) and Michael Ward (Cardiff AC). Full details on the race can be found here.

You can see the result of the XC results and links to where they’ll be published below. You’ll find them there once club-compilers have finished their epic jobs!

On the longer end of things, the final in the Centurion 100 mile grand slam series took place on Saturday-Sunday. The Autumn 100 was a soggy one this year but that didn’t deter Denmark’s Henrik Westerlin who smashed through the century in 14:02:19. This was the quickest 100 ever seen at any of the Centurion Running trail events.

Geoffrey Cheshire was close, by 100mile standards, finishing half an hour behind (14:31:16) on the four leg course from Goring. Another 30 minutes was enough for John Melbourne to squelch home to third in 15:01:39. The UK won out in the women’s race as Amy Sarkies took 18:30:27 to make it round the course.

French-based athlete Edwina Sutton couldn’t chase her down and came second in 19:48:01 and was probably in a clean pair of socks and downing her second cup of tea before Caroline Abid finished third in 20:56:51.