Giving it all to the finish line – Irish round-up 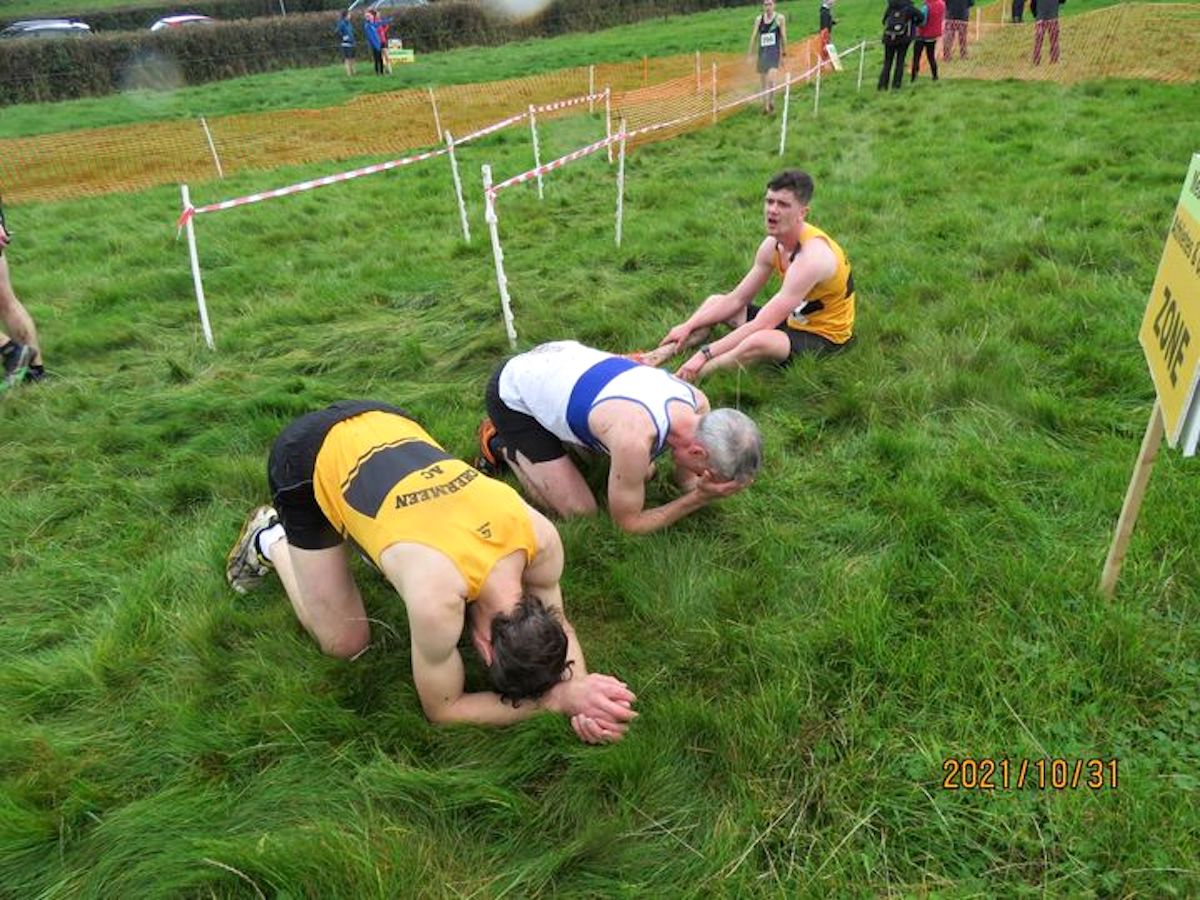 Another action packed weekend of Irish action endurance action brought to you by Lindie Naughton.

A best ever entry turned out for the 130th Clonliffe 2-Mile at Santry on Sunday morning (November 7) – a race first held in 1891 and considered by some to be the oldest road race in these islands.

Tonosa kept pushing the pace and his reward was a new course record time of 8 mins 54 secs. Kelly finished second while Jamie Gahan of Portmaornock AC was third.

Michelle Finn of Leevale, who lives locally, was first of the women ahead of Raheny’s Iseult O’Donnell and Jenn Elvin of Finn Valley AC. Some 550 runners turned out for Finn Valley’s Remembrance Day 10km held at Stranorlar, Co Donegal also on Sunday.
Gary Slevin of Foyle Valley AC led them home in 31 mins 59 secs, with Eoghain McGinley of Letterkenny AC second in 32:22 and Chris McGuinness of Foyle Valley third in 32:41.

At the Ballynahinch Remembrance 5km, Lawrences O’Hara from North Belfast Harriers was first home in 17 mins 28, while Sarah Branniff was fastest woman in 24:16.

Fastest at the Corofin Loops 10-Mile in Co Galway with a time of 54 mins 27 secs was veteran athlete Hugh McArdle of Roscommon Harriers. Clocking the fastest women’s time of 62:39 was Catherine Thornton of Crusaders AC. In the eight-mile event, Ed Maher with a time of 28:06 and Barbara Dunne of Galway City Harriers with 30:10 were the fastest.

John Weldon of Newbridge AC and Kate Purcell of Raheny Shamrock AC were the winners of the Fastland Clontarf Half Marathon on Saturday (November 6) in Dublin. Their times were 74 mins 6 secs and 78 mins 23 secs respectively.

Dylan Wright of Lucan Harriers won the 10km in 32:53, with Debbie McConnell of Jog Lisburn RC first woman in 39:40.

On the roads of Munster Husband-and-wife Michael Herlihy and Sinead OíConnor who both had runner-up spots at Eyeries, picking up a total of £300 in prize money.
Picture: John Walshe

At the Eyeries 5-mile on Saturday (November 6), two new course records brought the Beara Autumn Series to a close in style.

Tom Butler from the Shaftesbury-Barnet club in England reduced Alan O’Shea’s 2019 best of 25:21 by 11 seconds when finishing over two minutes clear of North Cork’s Michael Herlihy (27:23), with Kris Liepins (Watergrasshill) third in 28:04.

Butler is currently based in Bantry and has run 14:16.30 for 5000m this past season. Both Hannah Steeds of Clonmel AC and Leevale’s Sinead O’Connor were well inside the previous best with their respective times of 29:59 and 30:27. Eileen Vitting from Trim took third spot in 33:30.

The challenging course on the Wide Atlantic Way didn’t seem to pose any problem for Steeds. Just 24 hours later she won the Munster Intermediate Cross-Country title at Castlelyons.

With overfifty category prizes (including £250 for first male and female) the race, and indeed the four-race series, was a resounding success and a just reward for Mark Gallagher and his organising team.

On a busy weekend in Cork, the Buttevant four-mile saw victory going to Gary Scully from Nenagh, his 21:54 giving him a clear margin over local runner Darren Coleman (22:32) who only took up the sport over a year ago. Vincent McCormack of Newbridge AC was third in 23:17.

Carol Finn of Leevale AC won a close women’s race from Ailbhe McDaid from Kilmallock AC 24:23 to 24:30. Third was Linda O’Connor from Carrigaline in 25:41.

Lauren Tinkler of Dulbin City Harriers finished 13th with a time of 23 mins 23 secs for the 6.5km course at the opening round of the annual Belgian Cross-Cup series in Mol on Sunday (November 7).

Cliona Murphy was 17th and Edel Monaghan 19th in a good run-out for all three women before the National Championships on November 21. Only a week earlier, Tinkler had taken silver in the Dublin Senior Cross-Country Championships.

In other Sunday results, UCD’s Fiona McKenna won the women’s race at the Leinster Cross-Country Championships at Avondale House, Rathdrum in Co Wicklow.

McKenna finished the hilly 5km course in 18 mins 8 secs, with Una Britton of Kilcoole AC nine seconds behind for second and Lisa Madden of Sportsworld AC third in 18:39.

In fourth place, Laura Power was leading Clonliffe Harriers to team victory. Dunboyne AC was second and Sportsworld A third.

At the Munster Intermediate Cross-Country Championships, Hannah Steed of Clonmel AC won the women’s race ahead of Anne Msrie Connellan of Ennis TCand Noreen Mackey of Cork TC. Ennis TC was the winning team ahead of Clonmel AC and Grange Fermoy AC.

On Saturday (Novemerb 6) Eskaner Turki of Annadale Striders was the winner of the McConnell Shield Cross-Country held at , Sixmilewater Park in Ballyclare, Co Antrim.

Turki finished in 26 mins 46 secs, giving him sixteen seconds to spare over Ben Branagh of St Malachy’s AC, with Niall McKnight of Annadale Striders third. With four finishers in the top 17, Annadale beat North Belfast Harriers and Ballymena Runners for the team title.

Making it an Annadale double by winning the women’s race was Robyn McKee, who finished comfortably ahead of Catherine Whoriskey of City of Derry Sparats and Rebekah Osborne of Dromore AC who was leading her club to team victory. Lagan Valley was second and North Belfast Harriers third.

On the same day, Niamh Heaney of Omagh Harriers and Sean Melarkey of City of Derry Spartans were the winners at the NI and Ulster Novice Cross-Country Championships, held at Stranorlar, Co Donegal.

In a closely-fought women’s 4km race, Heaney just held off Kate Gourley of City of Lisburn AC, with the pair timed at 16 mins 51 secs and 16:53 respectively. Finishing third was Amy Hamill of Glaslough Harriers in 17:23. Winning a first ever team title was Keep Er Lit, with four in the top twenty.

Melarky won the men’s 6km in 21 mins 37, with Declan Ferry of Rosses AC second in 21:50 and Jon Jo Doherty, of the host club Finn Valley AC, a close third in 21.52. Rosses AC was first team., with Letterkenny AC second and Milford AC third.

Bracken, running for Saint Leo, had eighteen seconds to spare when he won in 31 mins 21.9 secs. His team finished sixth

Faye Dervan of Tallaght AC finished third in the women’s 6km, leading St Leo’s to second in the team placings. Among the other counters for the team were Aoife Mahoney from Listowel 34th and Anna O’Connor of Waterford AC 35th .

On the same day. at the NCAA South Central held in Lubbock, Texas, Fiona Hawkins, who is aining to make the Irish U23 team for the European Cross-Country Championships next months, finished a fighting 14th.

Hawkins, a frehamn at Adams State whose mother is former Irish athlete Nessa Noone, was running only her third races this season. She was competing for the winning team from Adams State, with her team mate Brianna Robles the race winner.

At the Offaly Cross-Country Championships on Sunday 31 October, Caroline Donnellan of Edenderry AC led the charge in the women’s 5km race and held on to her lead until the finish. Emily Grennan and Olympian Pauline Curley, both Tullamore Harriers, finished second and third, helping their club to team victory. Ferbane AC finished second and Naomh Mhuire AC third.

Pauric Ennis of Tullamore Harriers, back racing after a long injury break, dominated the men’s 10km race over 10km from the start. It was a third county title this season for Ennis, already the novice and inter champion.

Tom Lupton of Portlaoise AC, running as a guest, finished second, while in third place Barry Mooney was leading Tullamore Harriers to team victory, backed up by Barry Minnock and Jonathon Dunne who were fourth and fifth. Second team was Naomh Mhuire, led by Jimmy Coughlan, with Ferbane AC third. Laura Buckley won the women’s race ahead of Edel Gaffney and Ava Costello, both Trim AC. It was a fourth win for Buckley. Close packing gave the team title to Dunboyne with Trim second and Navan third.