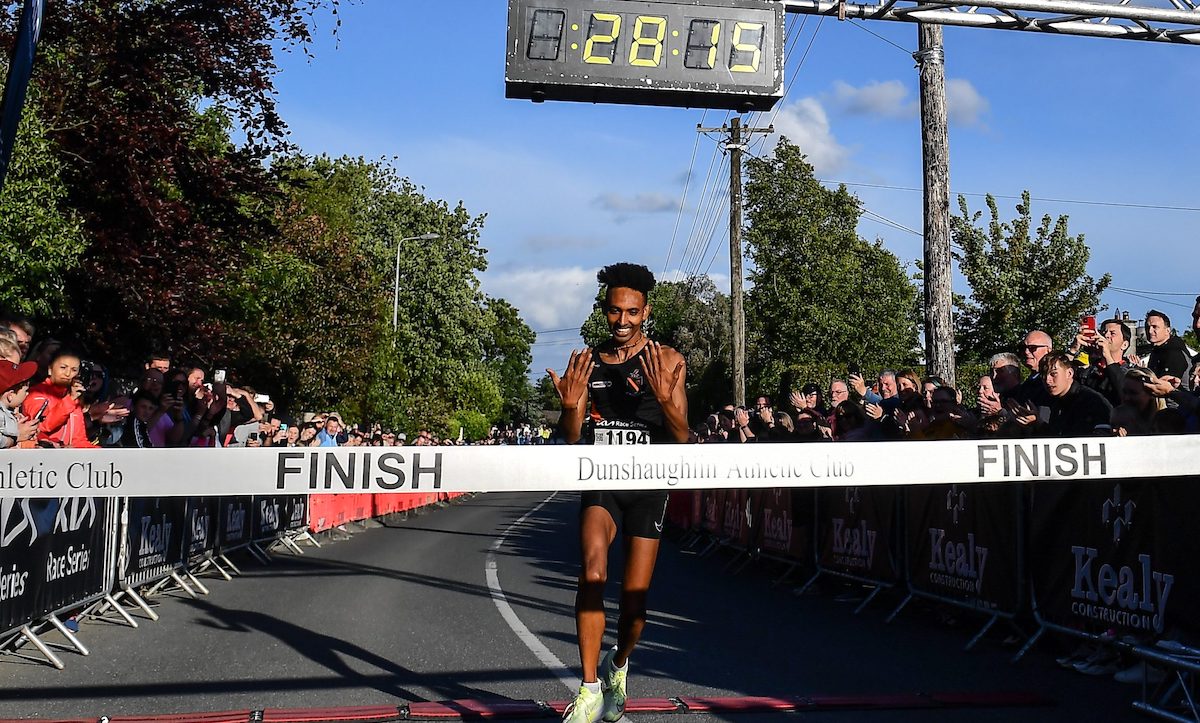 Action on the roads, tracks and hills of home and abroad. Lindie Naughton reports back on a weekend of course records and personal bests for Irish athletes.

Efrem Gidey of Clonliffe Harriers and Fionnuala McCormack of Kilcoole AC both set new course records when leading home over eight hundred entries at the Michael Manning Dunshaughlin 10km — firmly established as one of the best 10km race in the country (probably) on Saturday evening (June 18).

After pushing the pace from the start, Gidey was overall winner by a clear margin, finishing in 28 mins 15 secs.
Second in 28:50 was Hiko Tonosa, with Tonosa’s Dundrum South Dublin AC teammate Paul O’Donnell third in 29:09.
Fionnuala McCormack proved the class of the field in the women’s race, clocking a time o 32:08. Lizzie Lee of Leevale AC was second in 34:23 and Ciara Wilson of DMP AC third in 34:27.

Battle of the day came in the M40 category where Brian Maher of Kilkenny City Harriers snatched back the M40 Irish 10km record from Michael Harty of East Cork AC. Maher finished seventh in 30:06 with Harty one second behind for eight; his time of 30:07 was a personal best.

With Emmett Jennings 16th and Robert Corbally 22nd, DSD AC were comfortable winners of the team category ahead of Clonliffe Harriers and St Coca’s AC. An astounding 58 men’s teams had entered the race.

In the KIA Race Series co-ed team categories, DSD’s Tonosa, O’Donnell and McCambridge took the win. Leevale’s all female team was second and Mullingar Harriers third of eighteen qualifying teams. Leevale currently tops the leaderboard. Next round in the KIA Series is the Roscommon 10-Mile on Saturday, July 2.

A day later on Sunday (June 19), Hugh Armstrong of Ballina AC and Ciara Hickey of Brothers Pearse were the winners at the Tallaght 5-Mile, which was the opening round of the Dublin Marathon Race Series.

Armstrong broke away early with only Dunboyne’s Peter Somba for company. They finished in that order; Armstrong clocking 24 mins 13 secs and Somba 24:15. Finishing third and first M40 was Tomás Fitzpatrick of Tallaght AC in 26:31.

Hickey, also first W40, was a clear winner of the women’s race, finishing seventh overall in 27:35. In second place was former Irish mountain running international Sarah Mulligan of DSD AC who is making a welcome return to racing and finished in 29:14. Third in 30:37 was Yvonne MacAuley of Crusaders AC. A total of 1,322 completed the race

First home at the Castleknock 5km in west Co Dublin, was Irish junior international Scott Fagan of Metro St Brigid’s AC. His time of 15:12 put him well clear of the chasers led by James Bolton of Donore Harriers. The top five in the race were all juniors, with the second and third women also juniors.

Ger Copeland of organising club Dublin Bay RC was the winner of the DBCR Chaela Gonda 5-Miler on Howth Head. He finished in 31:53. Angela Charlton of Raheny Shamrock AC was first woman in 42:40.

In Co Westmeah, Dan Morris in 57 mins 4 secs and Theresa Hughes in 67:52 were the winners at the Athlone 10-Mile also on Saturday.

In the mid-week races, Thomas Sherlock and Laura McDonnell were the winner at the OPW BHAA 5km trail race in Dublin’s Phoenix Park on Tuesday evening (June 14).

Sherlock, of the Bank of Ireland team, had almost a minute to spare when winning in 17 minutes exactly. Second in 17:49 was Daniel Lowe while third was Laura McDonnell in 18:04. Second woman was Ciara Brady in 20:15; Sinead Kelly was third in 21:11.

Teams in BHAA races are divided into four grades for men from A to D, and Grade D proved the most competitive on the night, with Dublin City Council beating HSE by a single point. Best in the women’s category was Teachers, led by Niamh Garvey.

A day later, at the Musgrave Cork BHAA 5km at the Marina in Cork, Mark Walshe of the Department of Education team led home an entry of 367 runners.

Walsh who finished in 15 mins 21 secs, was followed closely by guest athlete Pat Hennessy in 15:32, with Andrew Sheehan of Eli Lilly third in 15:37.

Winners at the Donoughmore 7-Mile in Co Cork on Thursday evening (June 16) were Donal Coakley of Leevale AC in 38 mins 27 sec and Olympic marathon runner Aoife Cooke of Eagle AC, who was second overall in 38:34. Continuing her racing comeback to finish second woman and first W45 was Claire McCarthy of Leevale AC in 43:19.

On Friday in the Phoenix Park, Fintan Kerins of Clonliffe Harriers was a clear winner of the Dublin Pride Run 5km in 16:19, which had 759 finishers. First woman was Eimear Caulfield of LSA AC in 19:49. Gabriel Coleman, of Dublin Frontrunners AC, was fourth overall and first “non-binary” in 18:03.

At the Drogheda Midsummer 5km, also that evening, which had 342 finishers, Garry Mulligan of North East Runners clocked 16:55. Catherine O’Conner of East Down AC was third overall and first woman in 18:09.

Also on Friday, John Kinsella of organising club Bilboa AC was the winner of the Ger Mullane Memorial 10km at Cappamore in Co Limerick. His time was 32 mins 15 secs. Second in 23:33 was Declan Moore also a member of Bilboa AC. First woman was Dymphna Ryan of Dundrum AC in 37:01.

In Co Monaghan, Kenyan athlete Gideon Kimosap, a regular visitor to Ireland for many years, was the winner of the Clones 5km in 15:33.

With the National Track and Field Championships in Santry next weekend, athletes were putting final touches to their preparations at a number of events, among them the NI and Ulster Senior Championships on Saturday (June 18) at the Mary Peters Track in Belfast.

In the middle distances, Harry Purcell of Trim AC won the 800m in 1:55.49, with junior sensation Nick Griggs of Mid-Ulster AC second in 1:55.65. Purcell goes in the 800m at the championships, where he will take on, among defending champion Mark English of Finn Valley AC. Griggs is opting for a stacked 1500m, where the entry included Andrew Coscoran, Paul Robinson and Luke McCann.

Michelle Finn, who is aiming for an eighth national steeplechase title at the Nationals, was in action in Madrid, Spain, on Saturday, where she finished sixth in a chaotic steeplechase in 10:03.96 — well off the 9:46.13 she had run a week earlier in Germany.

Younger athletes, aiming for the looming European U18 Championships, were in action at the Meeting Junior Francoville near Paris on Sunday (June 19).

The European U18 Championships, hosted by Jerusalem, Israel, take place from July 4-7. Zak Hanna of Newcastle AC opened his season with a second place in the Montemuro Vertical Run (10.2km, with more than 2,090m of climb) in Castro Daire, Portugal, on Sunday (June19).

Hanna’s time of 25 mins 38 secs put him 1 min 52 secs behind the winner, Patrick Kipngeno of Run2Gether.

Junior athlete Tom Crudgington of Newcastle and District AC was the winner of the Meels Hill and Dale Race 9, at Meelmore Lodge on Thursday (June 16).

Crudgington finished in 44 mins 31 secs, with Jonathan Scott of Mourne Runners second in 44:52. Esther Dickson of Newry AC was first woman in 51:01, closely followed by Diane Wilson of Dromore AC, who was also first W50, in 51:03.

On Wednesday Derek Crammond of Parnell AC was the winner of the Leinster Evening League race at Brockagh in Co Wicklow, finishing in 49 mins 40 secs for the 11km race with 443m of climb. Fifth overall and first woman was Ali Armstrong in 55:48. How Ed looks after a 24hr race indoors a few years back, another of his fine performances over the last few years. Photo: Robbie Britton

Ed McGroarty of Lifford Strabane AC ran a total of 255.88 km to win the Belfast 24-Hour Race at Victoria Park which started on at midday on Saturday (June 18).

The distance was just shy of the Irish record-breaking distance of 256.57km run by McGroarty when winning the 2021 version of this race last October. Earlier that year, in July 2021, McGroarty had improved the record for running the length of Ireland from Mizen Head to Malin head to three days two hours and 53 minutes.

Dave Andrews finished second behind McGroarty with 244.42 km while Adrian McNamara was third with 241.05 km. Amy Masner was first woman and sixth overall with 213.67km.

Skyrunning in the USA

The North Face’s Paddy O’Leary was in action for the 57th race in 6 weeks (actually five in six weeks) at the Broken Arrow Skyrace in Olympic Valley, California.

Taking part in both the vertical kilometre and the 26km on Friday and Sunday, the Irish athlete was strongest in the downhills of the technical race that started above 2000m altitude and went as high as 2700m. Finishing in a sprint, after over taking several runners on the way down, O’Leary was 15th in 2:04:17. The face of an Irishman who just discovered he’d sat down next to a cooler of alcohol free beer. Photo: Robbie Britton