From Togher to Castlewellan to Athenry – Irish round-up 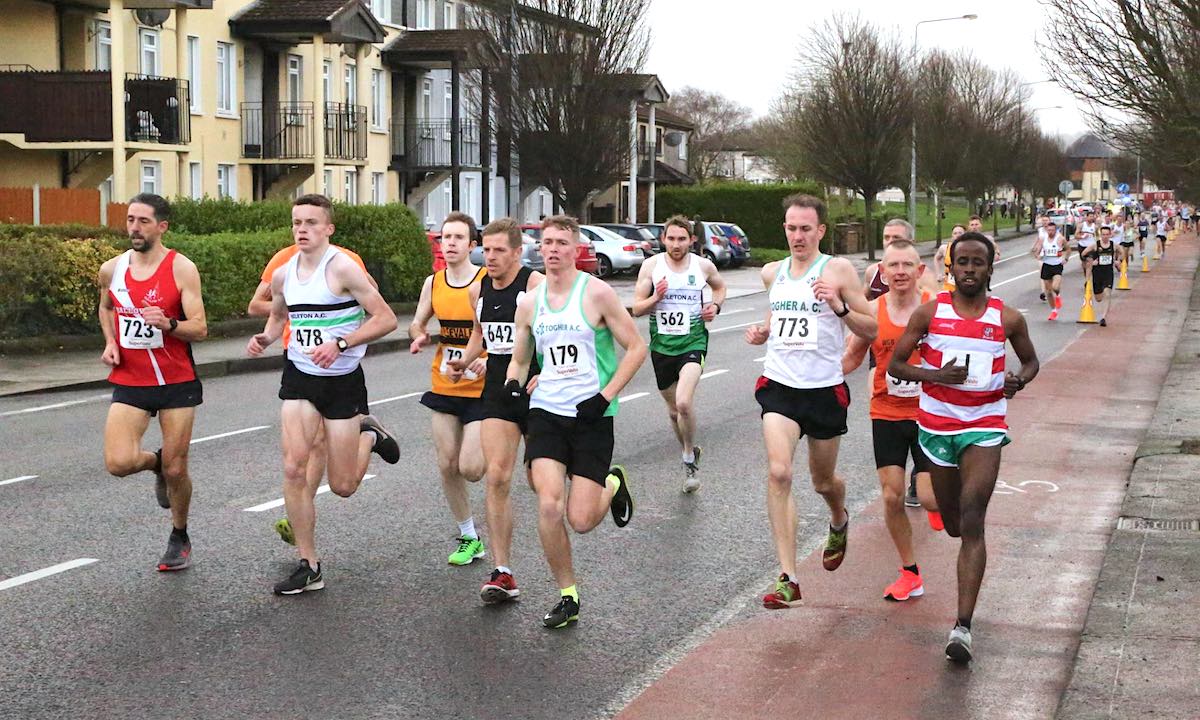 Paul Moloney of Mallow AC led home a record 740 finishers at the Togher 5k in Co Cork on Sunday (December 30). With a time of 15:33, he just made it to the line ahead of Eric Curran of Leevale AC who finished in 15:36. Third was Gavin Sweeney of host club Togher AC in 15:49.

Leevale’s Michelle Finn was the class of the women’s field winning in 16:58, Her Leevale clubmate Niamh Moore was second in 18:05 with Teresa Murphy of Kent AC third in 18:14. Efrem Gidey made it a home win at the ERP Christmas Cracker 5k, organised by Clonliffe Harriers at Santry, also on Sunday (December 30).

Gidey led the race back into the Morton Stadium after a tour of the Northwood business park and finished in an unofficial time of 14:47. His clubmates, Ian Guiden and Sean O’Leary, finished second and third.

First woman was Irish U/23 international Siofra O’Flaherty of St LOT AC, followed by Donore’s Sinead Lamb and Mary Leech of Drogheda and District. Best of the juniors in personal best times were Ben Guiden and Sarah Bateson both Clonliffe Harriers.

Zak Hanna and Seamus Lynch from host club Newcastle and District AC paired up to win the annual Castlewellan Christmas Cracker relay in a combined time of 53:24 for the 8.5 mile course on Saturday (December 29).

The Newcastle pair finished close to two minutes ahead of Timothy Johnston and Jonathan Scott of Mourne Runners who finished in 55:03. Third in 55:37 were Luke McMullan and Mark Stephens of Newcastle AC.

Winning the masters race were Russell Hughes and Duncan Bell of Willowfield Harriers who were sixth overall in 57:38.

First mixed pair was Jessica Craig of North Down and Wesley McDonnell of Dromore AC in 61:33, while first female pair were Gerrie Short and Catherine Diver of Beechmount Harriers in 64:24. A total of 750 teams had entered the race with 677 finishing.

Fastest at the Mooreabbey Milers Mile in Galbally, Co Limerick, on Saturday (December 29) was Rory O’Connor with a time of 4:32. Paddy Cummins clocked 4:43 for second and John Fitzgibbon 4:45 for third.

Fastest woman and first W40 was Susan Murnane with a time of 5:30. Dymphna Ryan was second with 5:35 and Aine McGrath third with 6:07.

At the Shandrum 5k in Newtownshandrum on Saturday (December 29), Niall Shanahan of An Bru AC clocked 15:21 to win the men’s race and break the previous course record by 34 seconds.

Junior athlete Aisling Dunne was the first woman home in 19:06 over the hilly course.

Darragh Rennicks of Bohermeen AC was the winner of the annual Rita and Robbie 5k held in Navan, Co Meath, on Thursday (December 27).

Rennicks’ time of 15:28 saw him finish over 40 secs clear of second placed Donal Mulligan of Longford AC who finished in 16:14. Shercock’s Niall Smith was third in 16:37. Fourth and first junior was Jake Cullen of Tara AC in 16:54.

International athlete Sara Treacy of Dunboyne AC was first woman in 18:14; Emma Donlon of MSB was second in 18:41 and Tara Kennedy of Raheny Shamrock third and first W40. In the team competition, Dunboyne with 34 points proved best of the men ahead of Navan AC and Na Fianna AC. First women’s team was Bohermeen AC with Tara AC second and Dunshaughlin AC second and third. Clohisey’s time of 29:46 was a new course record and saw him finish well over a minute ahead of Hugh Armstrong from Ballina AC, who came home in 31:07.

Brian O’Kelly of Crusaders AC was third in 31:55. In eighth place overall and first woman was Laura Shaughnessy of Dundrum South Dublin AC whose time of 34:55 was also a course record.

Jane Anne Meehan of Galway City Harriers was second woman in 37:12 and Colette Tuohy of Mayo AC third and first W45. The race attracted a record entry of close to 1,200.

A competitive field turned out for the Streets of Wicklow 5k where Hiko Tonosa of Dundrum South Dublin AC continued his comeback with a comfortable victory over Tallaght’s Tomas Fitzpatrick. Tonosa finished in 14:53 with Fitzpatrick twenty seconds behind in 15:03.

Best of the junior men was Joseph O’Shea who was 13th overall in 16:41. An impressive 12th overall and first M55 was Mick Byrne of Parnell AC.

First woman and first junior woman was Emma O’Brien of Inbhear Dee AC in 16:56. DSD’s Linda Byrne was second in 17:03 and Kilcoole’s Una Britton third in 17:28.

Biggest race in the north was the 33rd annual Greencastle 5 mile where British and Irish Masters champion Mark McKinstry of North Belfast Harriers ended a remarkable year with a runaway win in 24:42.

Second in 25:07 was Conor Duffy of Glaslough Harriers while third was Paddy Robb of St Malachy’s. Finishing 13th and first woman was track specialist Emma Mitchell of Team Nike in 28:29.

In Kilbeggan, Co Tim Murphy of Mullingar Harriers was the winner of the St Stephen’s Day 6k. Finishing fourth at first woman was Anne Marie McGlynn of Letterkenny AC in a course record time of 19:59. Second woman and 14th overall was the ageless Pauline Curley of Tullamore Harriers, back racing after a long lay-off.