From parkrun to 95 miles, with everything in-between – The UK weekend roundup 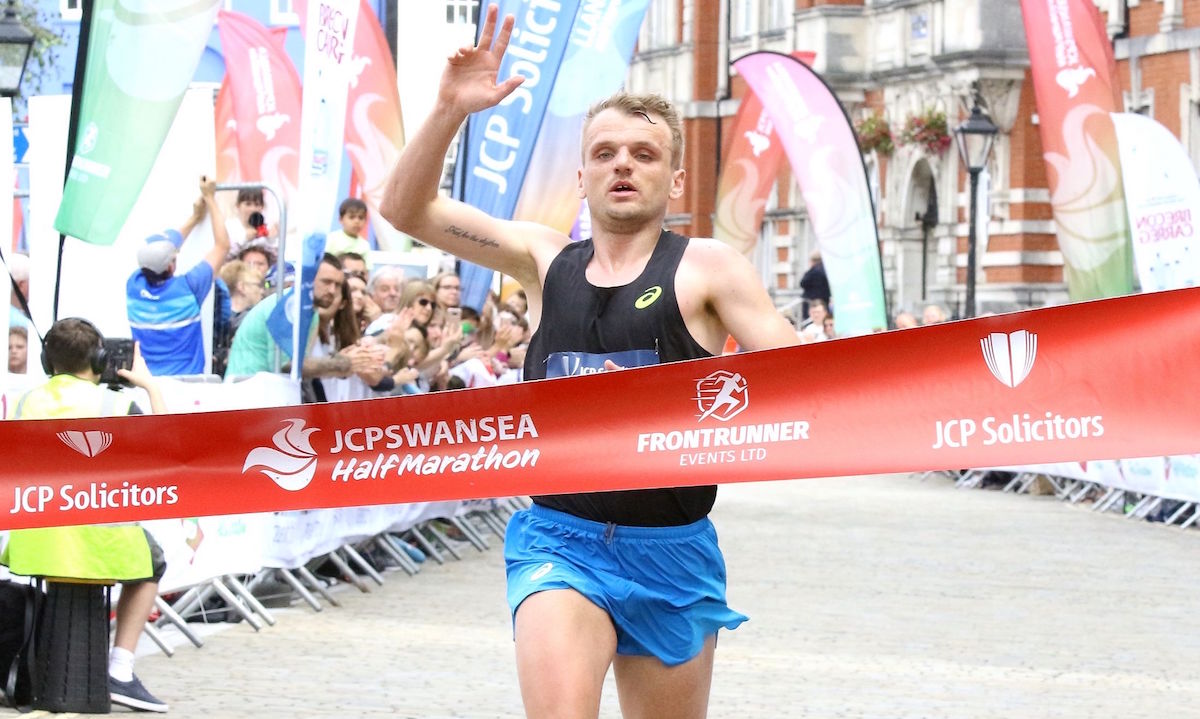 Tracy Barlow and Matt Clowes lead the familiar faces on half marathon podiums at Swansea and Torbay, whilst Callum Hawkins knocks on the door of his 10k PB in Glasgow.

Though it was ‘a windy & tough morning at the office’ Barlow used it as a chance to show her determination and take the win for the second year running.

Sadly Natasha Cockram, who is only just returning from injury, did not start the race and Hayley Munn ran with her Mum from halfway. That left the stage clear for Bristol & West’s Charlotte Taylor-Green to take second in 76:58 with plenty of clear road between her and last year’s fifth placer Naomi Mitchell, of Reading AC, who moved up to take the final podium spot in 79:00

The men’s race was a similar story with the wind leading to slower times than last year but the top spots looking rather familiar. Cardiff’s Matt Clowes, who like Tracy set a course record last year, ran 65:49 for first place while Swansea Harriers’ Josh Griffiths was second again in 66:37. Peter Huck of  Barrow & Furness finished in 68:12 for third.

You can read a full report here.

Down on the south coast, the Torbay Half Marathon also saw a repeat champions in the men and women’s races. Exmouth Harriers’ Tom Merson continued to show that he can not only dominate his local running scene but is on awesome form this year.

Merson absolutely smashed his winning time from 2018, taking nearly two minutes off it, to come home well ahead of any rivals and comfortably inside his PB in a time of 67:11.

Rachel Felton (Shaftsbury Barnet Harriers) successfully retained her title and took her seventh win of the 2019, running a time only nine seconds different to last year and keeping Lindsay Carrick at bay in 77:16. Carrick moved up a spot from last year with an improvement of one minute 22 seconds gaining her second place (78:25). Alistair Watson leading Ben Connor around the four mile mark, before being reeled in by the NB athlete. Photo: Stephen Lee

Earlier in the week it was the turn of the 10s. The Notts 10 was won by Derby AC’s Ben Connor (49:25) who was using it for a Friday night tempo run. Alastair Watson (Notts AC) had hoped to capitalise on his home advantage and did manage to stay ahead until mile mile but in the end he was left doffing his twitter-hat to Connor as the better athlete, though he still managed to hang on for second in 49:53.

The battle for first and second might have been a fair way ahead of Daniel Kestrel’s third place (53:37) but the Rotherham Harriers athlete had good reason to finish well with Daniel Bagley behind him, crossing the line only 13 seconds later.

The speedsters were out in force on Friday at the Brian Godwin Memorial 10k in Pollok Park and the Grantham Summer Solstice.

Making the most of the long evening, Sarah Chynoweth of Grantham RC took a win for the home team finishing in 40:59. Suzannah Fleming (41:16) and Melissa Neal (42:11) completed the top three.

In Glasgow, Kilbarchan AAC’s Callum Hawkins took his legs for a shorter spin that his normal marathon distance and came away with first place in 29:06, only 11 seconds off his PB. After his marathon heroics in London, running a huge PB and getting himself selected for Great Britain for the World Championship Marathon in Doha, it is excellent to see the young Scot in such good form.

Central AC topped the podium in the women’s race thanks to Morag Miller who finished in 33:51. Elspeth Curran (Kilbarchan AAC) was second in a strong field, finishing just three seconds off her previous fastest time, in 34:20. Fiona Brian of Metro Aberdeen RC ran 34:21 for third. All three women within 30 seconds looks like it was a good race for the ladies podium.

At the Withal and Hollywood 10k fun run Hayley Carruthers and Dan Robinson were working together once again to help the England Marathoner to a great time and win. The Birchfield Harrier ran 33:40 and was minutes clear of second place female. Robinson actually finished third himself, one second ahead of the athlete he coaches, who also topped our parkrun rankings yesterday. Quite the weekend!

The winning time for the men’s was 32:53 by James Marshall of BRAT, who was closely followed by Ronnie Wilson of Lincoln Wellington in 33:23. Second and third females were Jane Evans (38:01) and Rachel Gifford (38:34).

The winners of the event’s 5k race were Christopher McLeod in 15:38 and Jessica Saunders in 19:16. The swiftest to arrive at the Nevis Centre in Fort William was Rowan Boswood who took a mere 15:14:42 to finish – well over an hour faster than last year’s winner and putting him as the fourth fastest athlete over West Highland Way Race history, behind course record holder Rob Sinclair, multiple winner Paul Giblin and FR’s Robbie Britton.

Rob Payne’s time of 16:09:04 would have got him the win in 2018 but was only enough for second place this time around. GB 24hr runner James Stewart didn’t have the day he wanted, but the Hoka One One athlete rounded off a fast podium for third in 16:42:18.

Also worthy of note are Norma Bone who is still the oldest female finisher (31:45:03) now at the age of 67 and Rob Reid who extended his own oldest male finisher record to 73 (32:16:47). Both were comfortably inside the 35 hour cut off for the race.

Hayley Carruthers and Kris Jones are your quickest parkrunners this weekend (June 22). Check out the full rankings here.