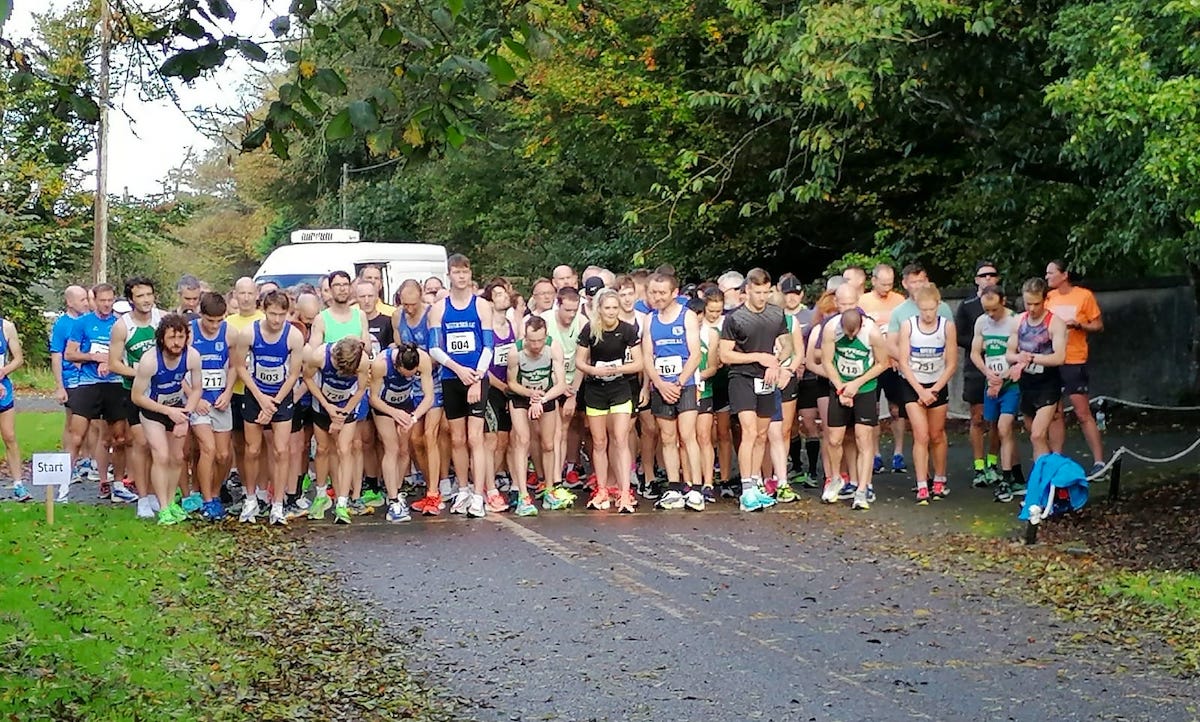 Butlerstown 5k was missed from last week's report and is included in a catch-up section below.

Another week of Irish endurance running with smiles and miles a plenty. Lindie Naughton reports.

Fionnuala McCormack produced the Irish atheltics performance of the weekend when she ran a personal best time of 69 mins 32 secs to finished ninth woman at the Valencia Half Marathon on Sunday (October 25).

Ahead of them both, Letesenbet Gidey from Ethiopia was first woman home in a world beating 62 mins 52 secs. That sensational time was 70 seconds off the 64:02 set by Ruth Chepngetich in Istanbul last April.

A time of 63:44 run by the Ethiopian Yalemzerf Yehualaw at the Antrim Coast Half Marathon on August 29 had been considered the world best time, until World Athletics announced last Friday that the course was 54 metres short. In Valencia, Yehualaw finished second in 63:51.

The mean streets of Galway

Donal Devane of Ennis TC was the winner of the Streets of Galway 8km held on Sunday (October 24), where the top three men all broke 25 minutes.

Devane finished in 24 mins 21 secs, followed by Niall Shanahan of An Bru AC in 24:24 and William Fitzgerald of Craughwell AC in 24:31.

Members of Leevale AC had travelled in force for the race and finishing first woman and eleventh overall was Lizzie Lee in 26:57. She was followed home by Regina Casey of Galway City Harriers, second in 29:25 and Carol Finn of Leevale AC third in 30:53.

A grand total of 989 finished the race which is normally held in early August. Looking for a real marathon

With the “real” Dublin Marathon cancelled for a second year, many distance runners were out running virtual Dublin Marathons on Sunday. Others signed up for the nearest marathon to Dublin on the day – the Thoroughbred Marathon in Kildare town – which quickly sold out.

First home in 2 hrs 38 mins 50 secs was local athlete Andrew O’Brien. Colin Coyne of St Abban’s AC and Thomas Baker of Navan were just behind O’Brien at halfway and although the pace slowed in the second half of the race, they held on to finish second and third with times of 2:45:00 and 2:45:35.

First woman in 3:14:22 was Julie McCarthy of Bilboa AC. Leah Headon from Naas AC was second in 3:19.36 and Cora Regan of Drumshanbo AC third in 3:20. 54. Finishing in 5:09.07 was Mary Nolan Hickey from Arklow, the only woman to have completed all Dublin Marathons to date. Hickey was using the race to run the Dublin Marathon “virtually”. Also competing was a large gang from the Carrick Aces club, along with many other club runners. Julie McCarthy was the women’s winner in 3:14:22. Photo: Donal Harrington

The good news is that the Dublin Marathon will be back next year on Sunday October 30.

The day’s other marathon was taking place at Shane’s Castle, in Randalstown, Co Antrim, where David Proctor of Willowfield Harriers was the winner in 2:55.32. First woman was Dawn Houston of Eglington Road Runners in 3:35.55.

Ricky Johnston of Jog Lisburn won the half marathon in 76:58, with Cathy McCourt making a welcome return to racing and finishing first woman in 89:52. In the 10km, the winners were David McCoy of Run DMC in 37:11 and Kelda Gibson of Convoy AC in 41:18.

There are other distances than marathon on the roads

At the Tralee Half Marathon in Co Kerry, also on Sunday, Derek Griffin was the winner in 73 mins 27 secs. Benvon Lyons was first woman in 88:46.

First home for the NI and Ulster team who competed at the Leeds Abbey Dash 10km on Sunday was Finn McNally ninth in a personal best 29.29. McNally has recently joined North Belfast Harriers. Conán McCaughey’s time of 30.13 for 33rd was also a Pb and indeed was Steven McAlary’s 30.35 which saw him finish 40th and first M35. Competing the men’s team was Chris Madden 49th with a time of 30.57

Business Houses racing was finally back in Cork on Sunday, where Gavin O’Rourke, Michael Harty and Ruari Casey were the top three men in a 5km race run at Little Island.

After a long break, the administrators admitted that they were “a bit rusty” with their timing slightly off, and the course slightly long!

Mighty close at the front

Mitchell Byrne of Rathfarnham WSAF AC was the winner of a closely-fought Streets of Kilkenny 5km held on Friday (October 21).

Kieran Kelly of Raheny Shamrock AC was third in 14:23, Gerry Forde of Kilkenny City Harriers fourth in 14:25 and David Scanlon of Rathfarnham WSAF AC fifth in 14.26. First M40 in eighth place overall was Jamie Gahan of Portmarnock AC, who finish in 14:55.

Cheryl Nolan of St Abban’s AC proved the class of the women’s field winning in 16:24. Second in 18:27 was Sharon Rynne of Kilmurry/Ibrick/North Clare AC and third in 18:55 was Leanne Butler of Kilkenny City Harriers in 18:55.

On Saturday (October 23) at the Brandon Bay Half Marathon, Mike Sheehy of West Limerick AC in 79 mins 12 secs and Leann Ní Chíobháin of Crusaders AC in 87:35 were the winners.

Not too far away, off the Kerry coast, Nick Hogan won the Valentia Island Half Marathon in 80 mins 31 secs; Barry Murry was second, finishing in 84:37, while Vivian Juffs was first woman in 1:46.39. Lisa Hegarty joined the elite group of women to have won races outright when she was first home in the 10km with a time of 40:05. Aoife Carberry was second and first W45 in 40:24 and Jonathan Kenneally third and first man in 40:49.

Winner of the men’s 8km at the Bobby Rea Cross-Country held in Comber, Co Down, on Sunday (October 24) was former Irish steeplechase champion Adam Kirk-Smith of Derry Track Club.

Jodie McCann of Dublin City Harriers was the winner of the women’s 6km race in 21 mins 47 secs, twenty seconds clear of Robyn McGee from Annadale Striders who finished in 22:07. Third was North Down AC’s Katie Moore in 22:21. In fourth place, Hannah Gilliland of Annadale Striders was first junior while fifth and first W40 was Anne Gosling of Newcastles and District AC. The event incorporated the NI and Ulster Championships.

Bronagh Kearns of St Senan’s AC was a comfortable winner of the women’s title at the Leinster Novice Cross-Country Championships held on Saturday (October 23) at Kiltorcan, Ballyhale, Co Kilkenny.

Kearns clocked a time of 14 mins 22 secs for the 4km distance, with Sile O’Byrne of Sli Cualann AC second in 15:00. In third place, with a time of 15:07, Aisling Ahern was leading Raheny Shamrock AC to team victory over Sli Cualann and Mullingar Harriers, with just nine points separating the three teams.

Pierre Murchan of Dublin City Harriers, fresh from his fine fourth place at the Autumn Open Cross-Country six days earlier, was first home in the men’s 6km with a time of 19:03.

Gavin Eccles of Raheny Shamrock AC was second in 19:22 and Philip Marron of Ratoath AC third in 19:54. Raheny won the team title from Ratoath and Drogheda and District AC.

Irish women were doing the nation proud in England at the Gloucester Elite 24-Hour Race held at the Blackbridge Jubilee Track in England which started on Saturday (October 23).

Duffy was a member of Irish equestrian eventing teams in her younger days, but after the birth of her son Harry, found that it took up too much time. In 2016, she started running and later that year, completed the Dublin Marathon.

She quickly discovered that long distances suited her and in 2018, won the Connemara 100. In 2019, she was second woman at the Barcelona 24-hour ultra, running over 201.8km. At the Gloucester 24 in late October last year, Duffy improved that distance to 207.026 km despite windy wet conditions. Duffy is supported in all her runs by her husband Robert.

Kane’s story is even more remarkable. Born with only 5% vision, she was also a late comer to running and immediately started making her mark guided by the experienced ultra runner John O’Regan.

In 2017, she became the first partially sighted person to complete the World Marathon Challenge – seven marathons on seven continents in seven days. In March 2021, she was a guest on RTE’s Tommy Tiernan show.

At the annual Trofeo Vanoni relay in Morbegno, Italy on Sunday (October 24), and Irish team of Ruairi Long, Matthew McConnell and Barry McEvoy.and finished a creditable 23rd. France were the winners ahead of two Italian club teams, with Slovenia fourth and Great Britain seventh. At the Butlerstown 5km on Sunday October 17, Harry Colbert, aged just sixteen, beat his Waterford AC clubmate Mario Matteo in a sprint for the line. The pair were given times of 14 mins 40 secs and 14 mins 41 secs.

A close third in 14:57 was Aidan Burke, another one of Waterford AC’s rising stars. Earlier in the month, Matteo had won the West Waterford Open Cross-Country. In a race dominated by Waterford AC, First woman in 16.49:20 was Ruth Fitzgerald, who finished comfortably clear of her clubmate Ruth Heery, who was second in 17.13.70. International race walker Kate Veale of West Waterford AC was third in 18.34.

Worth noting that, after a year’s absence, the Dungarvan Winter League – arguably the first league of its kind in Ireland and the inspiration for many others – will resume on Wednesday November 10 and continue every Wednesday until December 15. It then takes few weeks’ break before resuming on January 5 and continuing until February 2. The route is 5.2 miles around the streets of Dungarvan.