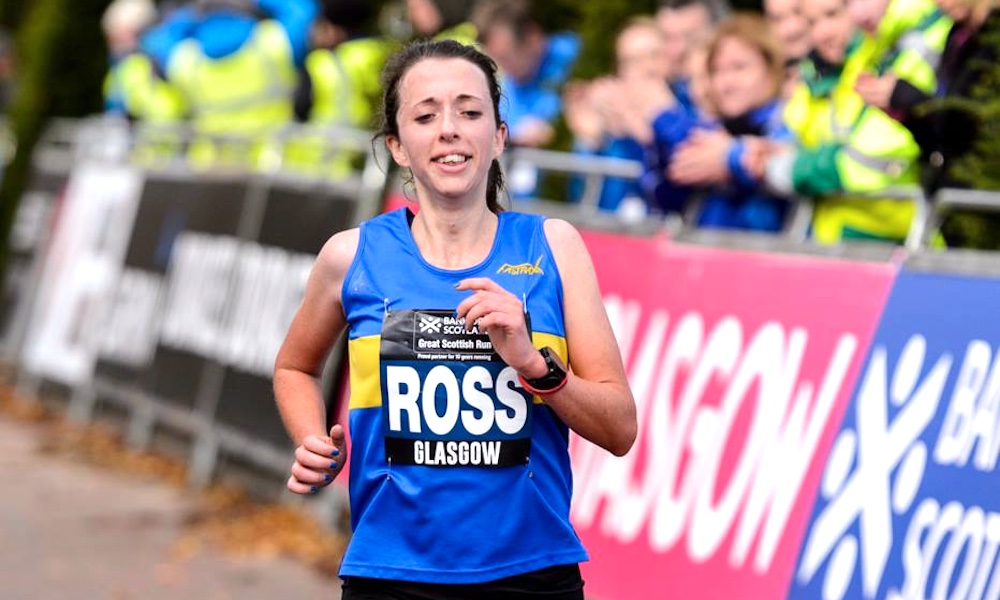 Ross, who competed for Ireland at the World Half Marathon Championships earlier this year, took 27 seconds off her previous best for the distance. In the men’s race, Irish marathoner Kevin Seaward made it into the top 10 running 30:05, while Raheny Shamrock’s Kevin Dooney ran a PB of 30:17 to finish 11th.

Colm Rooney of Clonliffe Harriers and Ide Nic Dhomhnaill of Donore Harriers won the senior titles at the Dublin Cross Country Championships in Santry on Sunday. A group that included Rooney, his Clonliffe team mate Cathal Doyle, Dundrum South Dublin pair Robert Corbally and Killian Mooney and Mitchell Byrne of Rathfarnham WSAF led the men’s 10km from the start. Only on the final lap did Rooney break free for victory in 30:55, followed by Doyle, Corbally, Mooney and Byrne in that order.

A distant second was DSD, with Crusaders AC third and defending champions Raheny Shamrock, who like Clonliffe, were missing their top men, fourth.

In a dramatic women’s 6km race, Niamh Allen of Crusaders AC pushed the pace from the start and built up a 30 metre lead on the chasing pack which included Ide Nic Dhomhnaill along with Dundrum South Dublin’s Meghan Ryan and Linda Byrne, and Anna Reddin of Crusaders. With about 2km of the race left, Allen pulled up briefly allowing Nic Dhomhnaill to power into the lead, with Ryan chasing hard.

Nic Dhomhnaill held on to win in 20:34, with Ryan second in 20.46 despite the best efforts of Reddin to catch her. Linda Byrne was fourth and Allen fifth. With Orla Drumm sixth and former champion Caroline Crowley ninth, Crusaders finished best of the teams on 23 points with Dundrum South Dublin four points behind for second and Donore third. In the women’s 3 mile and men’s over 60 race, Craig was followed home by Laura Bickerstaff of Dromore AC and Cara Laverty from City of Derry Spartans. First M60 and second overall was Laurence Johnston of North Belfast Harriers.

Mark McKinstry was taking his first ever victory in his local race and finished well clear of Glaslough Harriers’ Conor Duffy with Noel Logan of City of Derry Spartans third.

Shona Heaslip of An Riocht, who goes for a third national cross-country title at the end of the month, finished a close third in the women’s race at the CrossCup Mol in Belgium on Sunday. Polish athletes Anna Gosk forced the pace from the start and finished first ahead of her compatriot Katarzyna Rutkowska.

Heaslip was just two seconds behind for third. Also competing was Avril Deegan of Ballyroan Abbeyleix and District AC who finished 16th.

Emma O’Brien of Sli Cualann and DCU won the women’s junior race by almost a minute from local athlete Mathilde Deswaef. Jodie McCann of DCH was third and Avril Deegan of Ballyroan, Abbeyleix and District fifth.

In the senior men’s race, won by German cross-country champion Samuel Fitwi in 28:39, Kevin Maunsell of Clonmel AC was ninth in 29:42 and Luke McCann of Dublin City Harriers 26th in 31:37.

Wheelchair athlete Patrick Monahan of Le Cheile AC closed out his season with a fourth place at the Seoul Marathon in Korea on Sunday. His time of 1:33:11 was five minuted faster than the time he recorded in Dublin a week earlier.

In the U16 age group, both Harry Nevin and Laura Frawley finished second. The U16 boys team also took silver, as did the over 16 girls led by Chloe Casey who finished fourth in 3598 points.

The boys’ over 16 team finished third with Wiymin Sivakumar the team’s highest scorer with 3429 points. The U16 girls team also finished third.