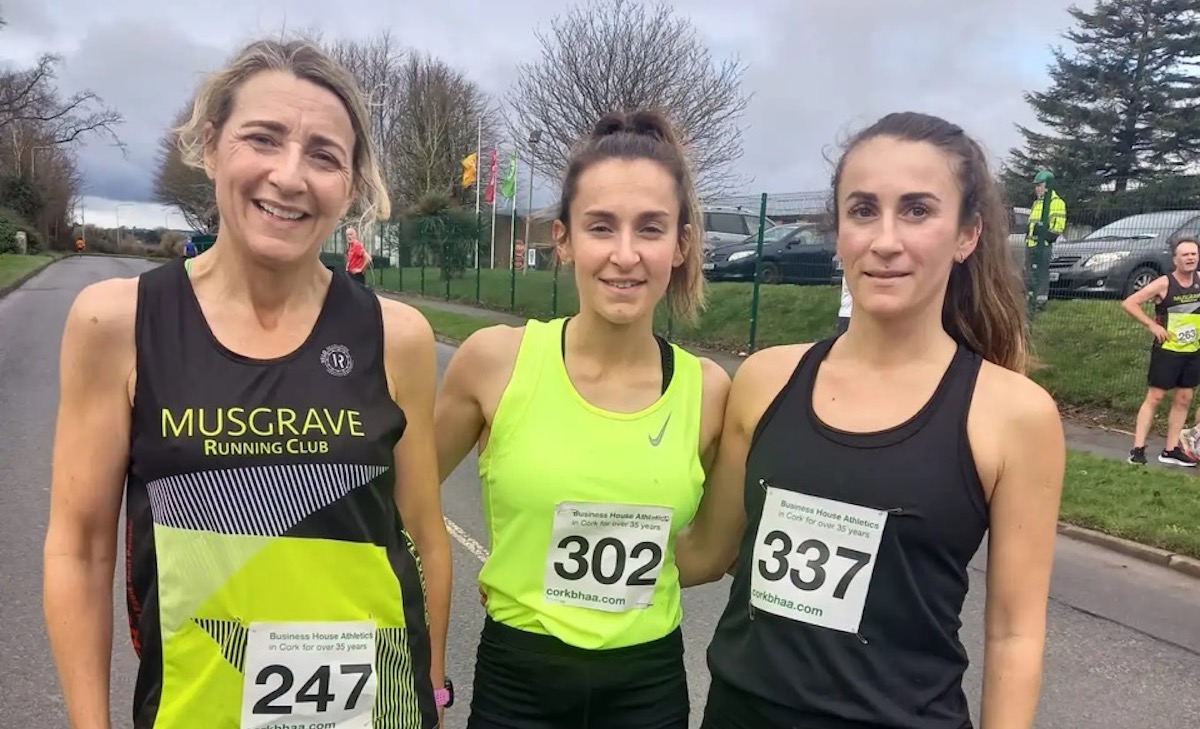 Irish records, 50k National Championships and a whole load of US indoor meets. It’s been a busy weekend, but, as ever, Lindie Naughton brings it all together for you to enjoy.

Sean Hehir of Metro St Brigid’s AC and Sorcha Loughnane of Donore Harriers were the winners of the National 50km titles on a lapped course at Donadea on Saturday (February 12).

O’Hehir finished in a time of 2 hrs 56 mins 04, giving him over four minutes to spare on many times previous winner Gary O’Hanlon of Clonliffe Harriers; O’Hanlon finished in 3:00.55 and was also first M45. In third place and first M40 was Raivis Zakis of West Waterford AC in 3:11.11.

The rain cleared just in time for the Enniscorthy 10km on Sunday (February 13) which took in a new, almost flat two-lap route out the Old Dublin Road and back the New Road, writes John Walshe.

Killian Mooney of DSD AC, seventh in the recent Raheny 5, was a clear winner when coming home first in 31 mins 49 secs. A minute behind was Brian Geraghty of Sli Cualann in 32:50, while third was Andy Nevin from Mullingar Harriers in 33:26.

In a more competitive women’s race, Waterford AC’s Ruth Fitzgerald, fresh from her second place in the Waterford 10 a week earlier, crossed the line thirteen seconds clear of Sheila O’Byrne of Sli Cualann in a time of 35:20. Third was Catherine O’Connore, also Sli Cualann, in 38:39. The winners took home €200 each.

A nice touch was the digital clock at the half-way mark on the course. Heaslip returns to form with show of strength over 6km

Shona Heaslip running for Tralee Phyical Therapy was not only first woman at the Cork BHAA 6km at Little Island, also on Sunday, she finished third overall.

It was a welcome return to form for the Kerry woman and former professional Irish dancer who had been out for action for some years now.

Race winner in 19 mins 31 secs was Eric Curran of Merck, followed by Kristaps Liepins of Stryker in 19:37 and then Heaslip in 19:43. Tenth overall and second woman was Carol Finn of Musgrave, while third was Linda O’Connor, also Musgrave.

Musgrave athletes were out in force and they duly took both the men and women’s A team team prizes, and well as men’s C. Cork County Council won both men and women’s B grade.

In London, Sligo man Keelan Kilrehill clocked a time of 13 mins 58 secs to finish sixth at the Podium Under the Lights 5k on Friday (February 11) in Battersea Park. Just behind him for seventh place was Ben Branagh of St Malachy’s AC who was given the same time. Finishing 12th with a time of 14:05 was Conor Maguire; 15th was Finn McNally of North Belfast Harriers in 14:09.

Performance of the weekend came from 17-year-old Nick Griggs of Mid-Ulster AC.

At the AI Indoors Games and League Final in Abbotstown on Saturday (February 12) Griggs won the 3000m in an Irish U20 record of 7:57.38 becoming the first Irish athlete under the age of 20 to break eight minutes for 3000m.

Second in 8:14.21 was Mitchell Byrne of Rathfarnham WSAF AC, while a close third was Efrem Gidey of Clonliffe Harriers in 8:14.58.

Leevale, which has its own indoor training facility in Cork, also took the men’s title with 62 points. Crusaders were ten points behind for second and Clonliffe Harriers third.

Darragh McElhinney of UCD AC knocked five seconds off his PB when he ran a time of 7 mins 45 secs for eighth place in the 3000m at the Meeting de Metz in France on Saturday (February 12). Leevale’s Lizzie Lee added yet another title to her collection when she won the women’s title at the National Masters and Intermeidate Cross-Country Championships in Castlelyons, Co Cork, on Sunday (February 13).

In other age groups, Niamh O’Sullivan of An Riocht AC was first W55 while a few places behind her, Carmel Crowley of Bandon AC was first W50. Pauline Moran of Mayo AC was first W65, with her clubmate Margaret Glavey first W70 and Maggie Dunne of Grange Fermoy AC first W75.

Leevale were comfortable winners of the W35 team title ahead of Raheny Shamrock and Sportsworld AC, with An Riocht AC winning the W50 plus category; Mayo AC was second and Dunboyne AC third.

Tim O’Donoghue of East Cork AC made it a Cork club double when he won the men’s race in 21 mins 52 secs. Clonliffe’s Sergiu Ciobanu, a previous Irish marathon champion who was making his debut debut as a master, was second in 32.14 and Eoin Mullan of Omagh Harriers third in 22:19. All three were in the M35 category.

Sixth and first M40 was Michael Hsrty of East Cork AC. Vivian Foley of Eagle AC was 14th and first M50, closely followed by Paddy O’Toole of Westport AC who was 15th and first M45. The evergreen Pauric McKinney of Inishowen AC was first M55 and Kevin Griffin of An Riocht AC first M60.

Short course for M65 and above

Andrew Milligan of North Belfast Harriers was the winner of the men’s race at the Stormont Cross-Country in Belfast on Saturday (February 12).

Olympic steeplechaser Kerry O’Flaherty of Newcastle and District AC proved the class of the women’s field winning in 19 mins 17 and also first W40.

Second in 19:49 was Katie Moore of North Down AC, while third was Newcastle’s Joanne Mills. With three in the top five, Newcastle not only finished first team on the day but also topped the league table where four results count. North Down was second and North Belfast Harriers third in both categories. Before this round, Armagh AC topped the league table, ahead of NBH, North Down and Newcastle. First in the M60 race was Noel Connor of Ballymena Runners.

Just one round of the league remains — the NI and Ulster Senior Championships on February 26.

Visitor Lea Braud was the winner of the women’s two-mile race at the Dublin Airport BHAA Cross-Country held at the ALSAA also on Saturday.

Braud’s time of 14 mins 34 secs saw her finish comfortabley clear of Gemma Treacy from the Hospitals A team and Sharon Tighe from South Dublin County Council. Best of the teams were the Teachers.

Ross Collins of Central Bank won the mens’ five-mile race in 32 mins 30 secs. Over half a minute behind for second was Aaron Cashman of the Teachers team, with Neilus Healy of Allianz third.

Teachers beat ESB in the men’s grade A category, with Dublin City Council winning B, Revenue the C grade and RTE best in D. Next BHAA fixture is a new look race organised by the Central Bank at Wesley College on Saturday Febriary 26.

Roisin Flanagan of Finn Valley AC finished seventh in the women’s 5000m in a time of 15:36.05 at the Boston University Invitational on Friday (February 11). Her twin Eilish, who competed in the steeplechase at the Tokyo Olympics, finished second in a separate 5,000m in 15:45.69.

Over the rarely run distance of 1000m, Luke McCann of UCD AC set a new Irish record of 2:17.40 in Louisville, breaking a record which had stood since 1985.

Laura Mooney of Tullamore Harriers ran a time of 9:18.83 for 12th in the 3000m at the competitive collegiate event that saw a host of records this weekend. In the 800m, Alex O’Neill clocked a time 2:12.43. Race winner was Roisin Willis, the 17-year-old daughter of former Irish International Breda Dennehy. Her time of 2:00.06 was a new American High School record.

Siofra Cleirigh Buttner of New Balance and Dundrum South Dublin AC finished fifth in the women’s 800m in a time of 2:04.78. More meets than a butchers shop

Brian Fay of Raheny Shamrock AC set a new Washington University record of 13:24.00 when finishing second in the men’s 5000m at the Husky Classic in Seattle on Friday (February 11).

In the women’s 5000m, Claire Fagan of Mullingar Harriers, a student at Portland, improved her personal best 16:32.08 when finishing 24th.

Elsewhere on Friday, Evan Byrne won the elite 5000m men’s race with a personal best time of 13:59.55 at the GVSU Big Meet in Allendale, while Peter Lynch of Kilkenny City Harriers finished second over the same distance on the opening day of the Windy City Invite in Chicago with a time of 13:47.33.

A day later, Lynch’s Kilkenny clubmate Shay Mc Evoy clocked 7:56.32 for victory in the 3000m, with Cormac Dalton of Mullingar Harriers also under eight minutes when finishing fifth in 7:59.73.

Sarah McCormack returned to winning ways (although, did she ever leave them?) at the Montserrat Sky Race in Spain. It was a new record of 2:30:08 for the Irish international mountain runner over the 25km course with 1500m of climbing.