Final lap surge from Bradley for the win – Irish round-up 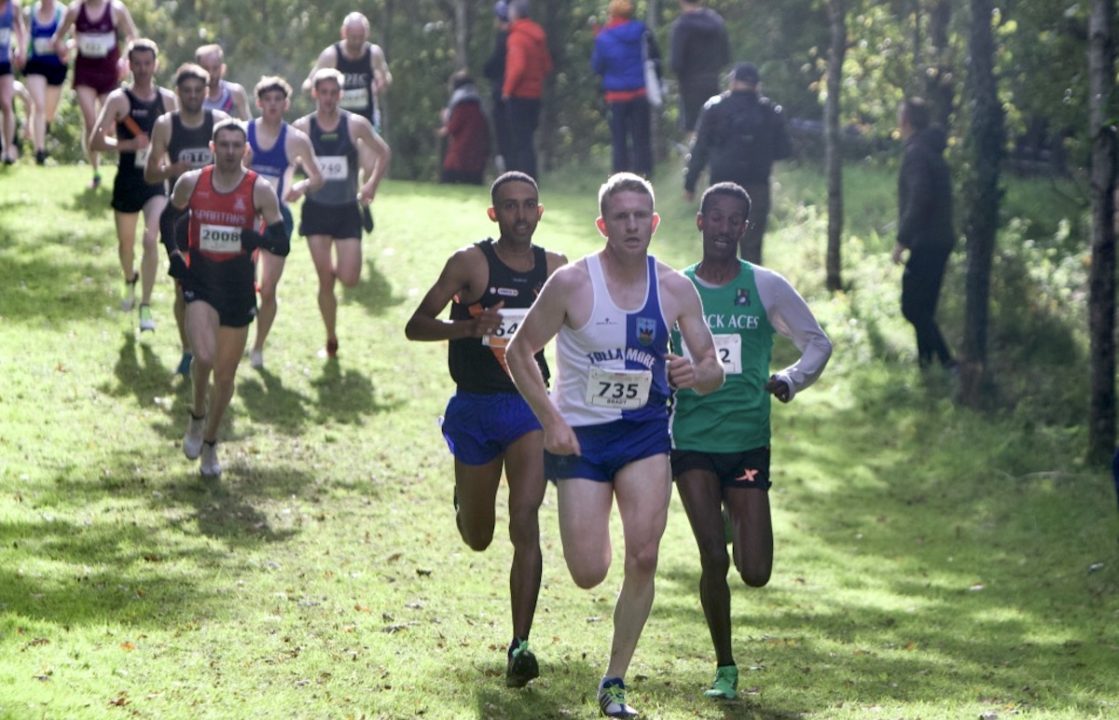 Conor Bradley of City of Derry Spartans was the surprise winner of the senior men’s race at the annual Autumn Open Cross-Country held in bright chilly conditions at Abbotstown, Dublin on Sunday (October 20).

On the final lap, Bradley moved to the front, coming home ahead of fast finishing English visitor James Gormley in a time of 22 mins 55 secs. Brady held on for forth while a close fourth was Matt Bergin of Dundrum South Dublin AC. Just 14 seconds separated the top four.

With the races also the trial for next month’s the British and Irish International in Stockport, close to a hundred masters men, aged between 35 and 60, ran. Colm Rooney of Clonliffe Harriers was first M35 in 23.31, Brian Maher of Kilkenny City Harriers first M40 in 23.42, Brian Geraghty of Sli Cualann first M45 in 25.48, Francis Marsh of North Down AC first M50 in 26.58, Tommy Hughes of Rathfarnham WSAF AC first M55 in 26.55, and Martin McDonald of Ballyroan, Abbeyleix and District AC first M60 in 29.11. Gidey was a clear winner of the men’s junior race;Keelan Kilreehill of Moy Valley AC was second and Shay McEvoy of Kilkenny City Harriers third.

Dominating the women’s race was English visitor Abbie Donnelly who finished in 20.51. Becky Straw, also from England, was second in 21.21, and Mary Mulhare of Portlaoise AC third in 21.27. In the masters’ categories, Fiona Kehoe of Kilmore AC was first W35 in 22.18 although it was Teresa Doherty of Finn Valley AC, winner of the British and Irish international last year, who was first master home and first W40 in 21.48.

Grace Carson of Mid-Ulster AC was first junior woman in 15.55.

Mark McKinstry not only won the men’s race in the Comber Cup cross-country at the Billy Neill Playing Fields, in Dundonald on Saturday (October 19), he also led North Belfast Harriers to team victory.

McKinstry finished in 27 mins 59 secs – comfortably clear of Seamus Lynch from Newcastle and District AC who crossed the line in 28:39. Third in 28:53 was Allan Bogle of City of Derry Spartans with James Gracey of Beechmount Harriers first junior. A total of 187 ran in the men’s senior and junior race. Winning the race from men over 60-70 was Norman Mawhinney of Scrabo Striders.

Almost as many turned out for the women’s race won by Rebekah Nixon of Dromore AC in 24:25. Mari Troeng of Newcastle and District AC was second in 27:03 and Katie Moore of North Down AC third in 25:13. Fourth and first master was Karen Wilton of Jog Lisburn AC, while first junior was Emily McLaughlin.

Winning the Longwood 10km in Co Meath on Sunday (October 20) was Sean Hehir who has recently transferred to the Metro St Brigid’s club.

Hehir was using the race as a final blow-out before next Sunday’s Dublin Marathon and finished in 30 mins 42 secs. A distant second in 32:26 was Freddy Sittuk, with Colm Turner third in 32:45.

Tallaght athlete Laura McDonnell was first woman in 38:36, with Fiona Gettings second in 40:31. Winners of the 5km race were Andrew Nevin of Mullingar Harriers in 16.21 and Trim junior Ava Costello in 19:16.

At the Rebel Run in Cork, also on Sunday, Denis Coakley was the overall winner of the 10km in 33 mins 28 secs with Grainne O’Neill first woman in 39: 08, while Sheldon Kirkwood and Noreen Mackey were first home in the 5km.

Jonathan Roebuck led home over a thousand finishers at the Gr8 Run in Dundrum, Co Down, on Saturday (October 19) finished over a minute clear of the chasers in 44 mins 7 secs. First woman in 53.50 was Sinead Murtagh of Newcastle AC.