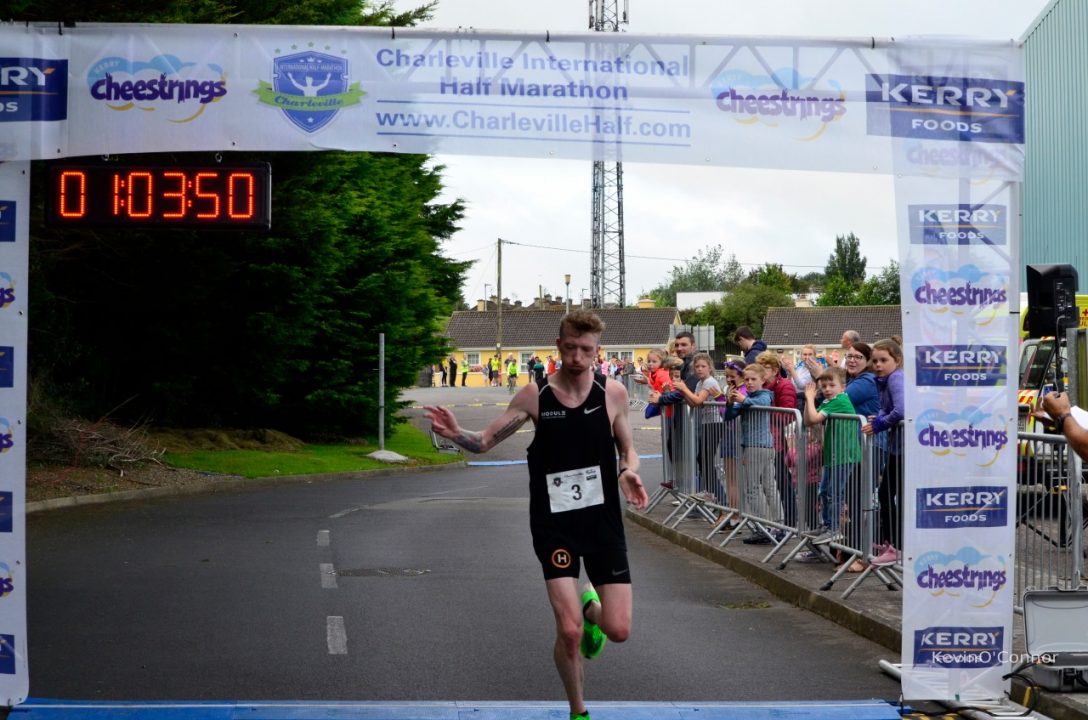 David Flynn of Clonliffe Harriers AC ran a big personal best and course record of 63 mins 48 secs to win the Charleville Half Marathon in Co Cork on Sunday (September 15).

Flynn, whose big target this autumn is the Dublin Marathon, has recently returned from warm-weather training in Morocco.
His time beat Martin Fagan’s course best of 63:58 set in 2014 and put him comfortably clear of Mick Clohisey of Raheny Shamrock who finished in a personal best 64 mins 16 secs – the third fastest time for the course. Finishing third was Hugh Armstrong of Ballina AC in 64 mins 29 secs, which was another personal best.

Behind the top three, Freddy Sittuk of Raheny Shamrock finished in 68.30, Tim O’Donoghue of East Cork in 68:31 and Sean Hehir, currently unattached, in 68:41. With three athletes under 65 minutes and eleven under 70 minutes, this was a quality race.

First woman in a lifetime best of 74 mins 41 secs was Aoife Cooke, club coach with Ballymore Cobh AC and in the form of her life. A niece of the distance running pioneer Mary Sweeney from St Finbarr’s AC, Cooke had quit athletics after a few years in Arkansas on an athletics scholarship.

After returning to the sport, and coached by her aunt, she won the National Novice Cross-Country title in 2015 and then the National Intermediate title in 2017. Earlier this year, she moved up a level, running a superb time of 55 mins 17 secs at the Mallow 10-mile.

Finishing well behind her in Charleville was Una Britton of Kilcoole AC in 80:10 with Jill Hodgins of Leevale AC third and first W40 in 82:04. Fastest women’s time for the course is 73 mins 5 secs, run by Maria McCambridge of Dundrum South Dublin AC in 2012 – the inaugural year of this race, which is undoubtedly the fastest half marathon in the country.

A second place at the Drei-Zinnenlauf mountain racing classic in the Italian Dolomites on Saturday (September 14) means that Irish international athlete Sarah McCormack is certain to be crowned women’s champion after the final race at Smarna Gora in Slovenia on October 12. McCormack completed the 17.5km run with a savage 1,350m of climb to finish in 1 hr 46 mins 20 secs. Race winner in 1:41.44. was British athlete Sarah Tunstall who had also won the Grossglockner round earlier in the season. However her two wins are trumped by a win, two seconds, a fourth and a 13th for the ultra consistent McCormack. The Lake District-based athlete finished third in the World Cup last season.
On a good day for the Irish, Zak Hanna of Newcastle AC finished seventh of 486 men in 1:29.19, while Killian Mooney of Dundrum South Dublin AC was 26th in 1:43.17.

Back on the roads of Ireland

Yared Derese of Carrick Aces proved the class of the field at the Dromiskin 5km in Co Louth on Saturday (September 14).
His time of 14 mins 23 secs putting him almost two minutes ahead of the chasers led by Jack Boylan of Dunleer AC in 16:12. First woman was former Irish marathon champion Laura Graham of Mourne Runners in 17:28. North East Runners won both men’s and women’s team races.

Ciaran McKenna of Star of the Sea AC was the winner of the Ratoath Half Marathon, also on Saturday, in 68 mins 38 secs. Second in 69:48 was Mark Ryan of Rathfarnham WSAF AC, while third in 70:34 was Sean Doran of Clonliffe Harriers. First woman in 81:11 was Niamh Clifford from Star of the Laune AC. Dunleer’s Karen Costello was second in 85:11 and Sabrina Keogh of Dunboyne AC third in 87:06. Fourth and first W50 was Rose Lambe of Carrick Aces in 89.10. A total of 821 completed the race.

Gideon Kimosop of 1ZERo1 was a comfortable winner of the Westport 40 10km in Co Mayo on Saturday in 30 mins 21 secs. Paul O’Donnell of Dundrum South Dublin AC was second in 31:42 and Conor McCaughey of North Belfast Harriers third in 32.01. Laura Shaughnessy of Galway City Harriers was first woman in 35:48 with Teresa Doherty of Finn Vally AC second in 36:46 and Regina Casey of Galway City Harriers third in 37:07. Mayo AC, led by Norah Pieterse in fifth place, was first of the women’s teams, with Ennis Track first of the men led by Rory Chesser in fourth place.

Aisling O’Connor of Edenderry AC added her name to the exclusive list of women who have finished outright winners of a race when she came home first overall at the Mediaeval Marathon in Kilkenny on Saturday. Her time of 2:55.28 put her over a minute clear ahead of Enda Cloake who finished first man in 2:56.43.

Also on Saturday Mick Kelly of St Abban’s won the Street of Carlow 5km in 16 mins 44 secs. Second was Simon McElwee in 17:28, while first woman was Bronwen McDonald of St LOT AC in 19:20.

Daire Finn, and Donore’s Maura Kearns were the winners of the St Brigid’s 5km in Castleknock Co Dublin on Sunday (Sept 15).
Finn finished in 15 mins 44 secs, with Alasdair Brown of Donore Harriers second in 17:43 and Paul Whitty of St Brigid’s GAA third in 18:27. Kearns finished sixth overall in 18:54. Sharon Kavanagh and Ruth Fitzsimons, both juvenile members of St Brigid’s GAA, were second and third.

Annette Kealy and Paul Moran added two more gold medals to the Irish haul on the final day of the European Masters Championships in Venice.

Kealy of Raheny Shamrock AC won the W50 10km in 37 mins 34 with Cathryn Brady of Dundrum South Dublin AC finishing third in 42:15. It was a second medal for Kealy who had won the 5000m on the track earlier in the week.

In the half marathon, Paul Moran of Rathfarnham WSAF won the M55 title in 77:20.

There was silver for Pauline Moran of Mayo AC who finished second in the W60 10km in 42.26, while the W60 team of Noreen Bonner, Donna Evans and Nuala Reilly, backed up by Gloria Donaghy and Julia Galea took bronze.

A day earlier, Ross Alexander finished second in the M35 20km walk, while the W35 team took silver in the 4x100m.

Ireland ended up 15th on the medals table with 10 gold, 10 silver and six bronze medals. A total of 35 countries won at least one medal.