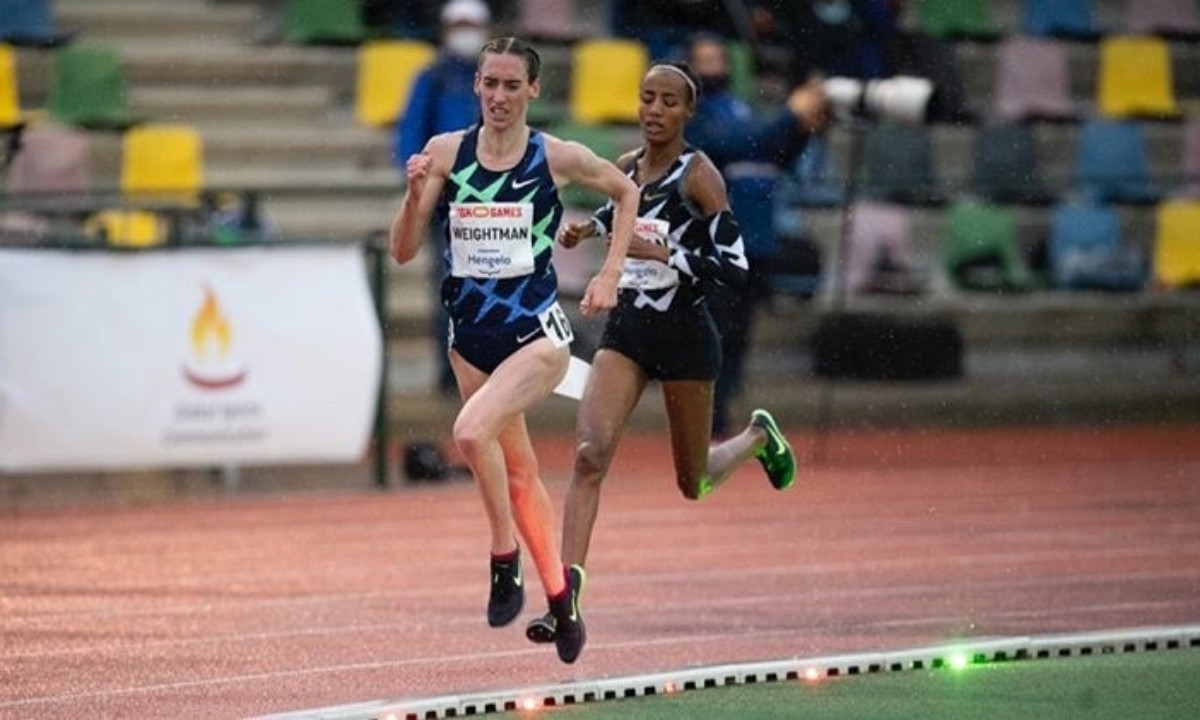 Race tracks are being well utilised for events at the moment and it was Wigan’s turn to host a stellar lineup for the Fast 5k at Three Sisters Circuit on Monday. Running 1.1k loops, Eric Jenkins of the USA (who ran a 13:10 5,000m indoor at the Boston University Last Chance Invitational back in Feb) was clearly there to do business and went out hard from the off.

He had a huge lead in the early stages but paid a little towards the end. Still, his guts or glory approach was still enough for him to finish first in a blistering 13:52.

She wrapped up her amazing season with an 11s PB to take the win in a dominant 15:10. Jessica Hull (AUS) was second in 15:50 and Amelia Quirk (Bracknell AC) ran her first road 5k to take third in 15:54. It’s also worth noting that Weightman went on to pace Sifan Hassan to her Euro 10,000m record – see below).

Only 22 years old and despite looking nervous at the start, Ethiopian Letesenbet Gidey gave a lesson in the poetry of running as she broke a 12 year old 5,000m World Record. Gidey looked completely in control the whole way round and convincingly bested Tirunesh Dibaba’s previous by over four seconds, finishing in 14:06.62.

With the help of pacers and wave-light technology the event was flawlessly organised and very tightly monitored to make it as safe as possible for all those in the arena. Joshua Cheptegei’s mission was to claim his fourth World Record in 10 months and beat the time set by Kenenisa Bekele 15 years ago. As with the women’s challenge, this one never looked in any doubt and the results proved it, as he stormed home in 26:11.00 to re-write the record more than six seconds.

Perhaps inspired by Gidey, Sifan Hassan who is 5 years her senior, took advantage of a home crowd for her 10,000m at the FBK After Summer Competition in Hengelo. Setting out at world record pace despite tough conditions, she was certainly all-in and the result was another European Record of 29:36.67, bettering Paula Radcliffe’s previous mark of 30:01:09 (2002).

Capped of the 2020 season pacing @sifanhassan for 9 laps in a wet cold Hengelo! Sifan went onto run the 4th fastest of all time and a European record of 29:36.6 🔥💪🏻 Time to rest and reset for 2021! 📸 @jeemsportsphotography

Hassan will be back in action next weekend at the World Athletics Half Marathon Championships in Gdynia. In the women’s 1,000m Faith Kipyegon (KEN) had also stated her intention to try for a WR but ended up taking the win in 2:32.82, a few seconds off her PB.

At the Biella Orpa race the British Mountain Running champion Emmie Collinge showed that she was in fine form. Fellow favourite Sara Dossena pulled out at the last minute and Collinge was on her own after the first climb at one and a half kilometers into the 12.2k race. But Collinge didn’t let that stop her pushing all the way.

She charged to victory in a massive course record of 50:59 beating Valeria Straneo’s 2011 mark by over two minutes. In the men’s race Moroccan athlete Omar Bouamer also set a new record, taking his title in 47:46.

The Finsbury Park Athletics Covid-19 Series wasn’t EA licensed so unfortunately those who ran PB’s will have to go again to get them on Power of 10 but nonetheless it was a great event with a good range of races on offer. Over 5,000m Yasmin Goater was fastest female, bringing it home for Highgate Harriers in what would have been a serious 30s PB of 16:44.9. Hannah Viner helped ensure a clean sweep for ‘the Gate’ with her 16.45.4 and in a later race, Holly Dixon completed the podium in 16:56.3. Seyfu Jamaal (Heathside) topped the men’s racing in 14:41.0 to beat U20 Tyler Bilyard (City of Norwich) and Harrow AC’s Kevin Fini (16:27.3).

At the Run Through Olympic Park 5k Orion Harriers’ Nick Harris-Fry nabbed himself a PB of 15:52 for the gold-spot and schooled David Searle into a second place finish in 16:06. James Ellis took third in 16:20.

In the women’s race it was Naomi Taschimowitz who was utterly unmatched, finishing in 16:32 way ahead of a nonetheless excellent runs from Evangelista Divetain (18:15) and Becky Morrish (18:18). In the 10k Jen Baird led the ladies home in 36:47. Georgina Wiley kept her close to finish in 37:01 and Harriet Freemen followed up in 37:58. VP&TH took the top honours in the men’s race thanks to Ewan Cameron and his 31:55 finish. He was comfortably ahead of nearest rival Benjamin How (32:24) and Andrew McCaskill (33:08).

The Ultra crew were out in force this weekend, with the inaugural Run to the Sea being the shorter of the races. After being rescheduled from March, runners finally got to cover the 50k from Ringwood to Hengistbury Head. Natasha Lewis of Team Bath AC took the honour of being first ever female winner in her first ever race over the half marathon distance, setting up a punchy course record of 3:49:20. Samatha Amend was shortly behind her was Belgrave Harriers’ Sam Amend in 3:54:19 and Tracy Cook of Dorset Dollers in 3:58:49. Harry Smith was overall winner, making it back to his club’s home turf in 3:25:48. Kent Ac’s Peter Lighting was second in 3:30:34 and Neil Martin of Overton harriers was third in 3:42:06. A hat-tip also goes to FastRunning-friend Paul Radford who just missed out on a podium spot with his 3:42:06 finish.

It was sad to read that Callum Hawkins, Steph Davis and Charlotte Purdue will not be able to run at the World Half Marathon Championships next weekend due to injury. We wish them speedy recoveries and all the best to Adam Craig and Becky Briggs who have recently been announced as part of the squad going to compete.

It’s a shame not to see a full women’s team there, but with Elsy Davis and Hayley Carruthers and Aly Dixon also on the injury bench (or returning from), it does feel like our athletes are having a bumpy ride at the moment.

Got the call up for World Half Marathon Champs – Senior GB debut 🇬🇧 I am absolutely over the moon, I’ll give it everything I’ve got, so very grateful for the opportunity, maybe 2020 ain’t that bad after all ❤️ @britishathletics @sayskycph @stmarysepc @stmarysac #britishathletics #teamgb #2020 #runnersofinstagram #runnerscommunity #runningmotivation #nevergiveup #dreambigworkhard #saysky #sayskycph #sayskyathlete #projectwoods