Fast 10 milers the flavour of the week – Irish round-up 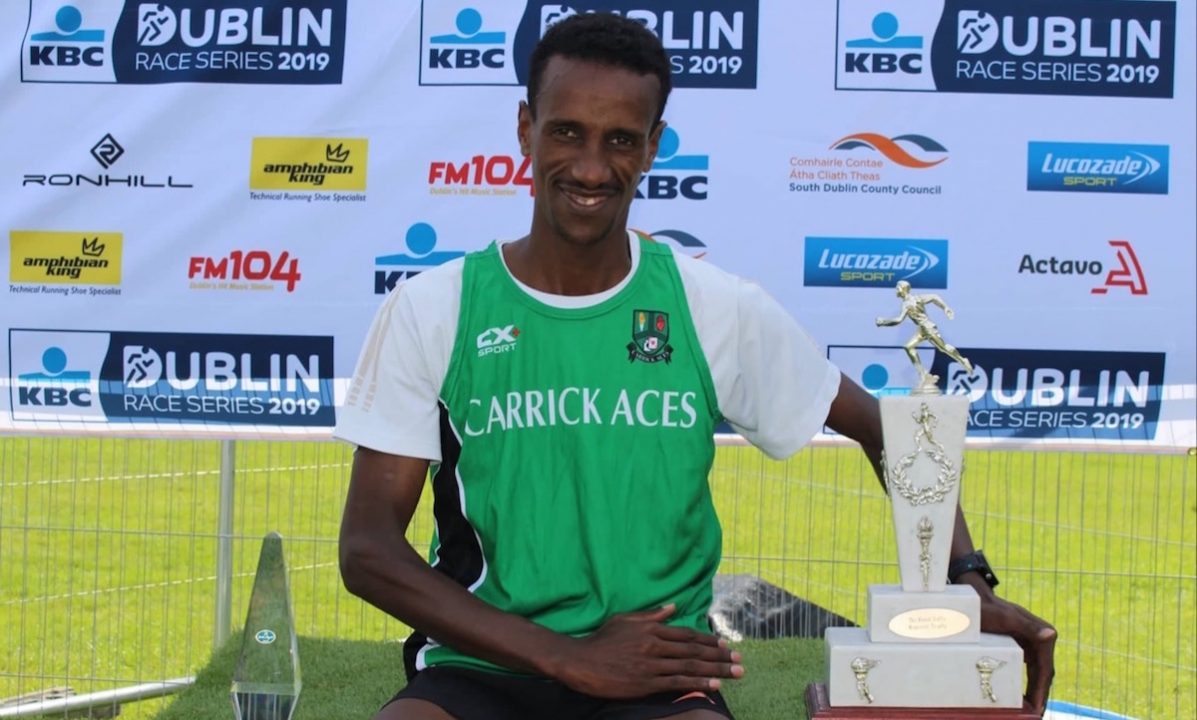 There were fast 10 milers, more fireworks on the track overseas, as well as cross country and mountain action. A packed weekend reported by Lindie Naughton.

Yared Derese of Carrick Aces was a comfortable winner of the Trim 10-Mile in Co Meath on Sunday (February 2). By halfway, which he reached in 23 mins 32 secs , Derese had built up a minute’s lead and he went on to win the race in 48 mins 1 sec, with Eric Keogh of Donore Harriers, the only other athlete to break 50 minutes, second in 49:29.

Hugh Armstrong of Ballina AC was third in 50:22 and former Olympic race walker Colin Griffin of Ballinamore AC fourth in 51:56.

First woman was Ciara Durkan of Skerries AC in 59:16. Isabel Oakes was second in 60:48 and Caroline Donnelly of Edenderry AC third and first W40 in 60:53.

In Co Waterford, Mick Clohisey of Raheny Shamrock AC was the winner of the John Treacy Dungarvan 10-Mile in 48 mins 16 secs.

Kevin Maunsell of Clonmel AC was second in 48:30 and Conor Duffy of Glaslough Harriers third in 50:07. Alan O’Shea of Bantry AC was fifth and first M40 in 51:02. Dublin visitors Crusaders AC were first of the 25 teams, beating East Cork AC and St Finbarr’s AC.

Another sizzler from Coscoran

After his sub-four minute indoor mile a week earlier, Andrew Coscoran, of the Star of the Sea club in Co Meath, continued his recent streak of good form with a personal best 3:37.98 for 1500m at the Boston University Scarlet and White Invite on Saturday (February 1). Dublin Track Club athlete Coscoran finished third in the race, with Josh Thompson the winner in 3:37.21.

Meanwhile in Melbourne a week earlier, Sean Tobin of Clonmel AC and Michelle Finn of Leevale AC won the 3000m races at the Box Hill Classic in times of 7 mins 59 secs and 9 mins 6 secs respectively.

Sean Horan of Harrier Products was the winner of the Garda BHAA open four mile cross-country in Dublin’s Phoenix Park on Saturday (February 1).

Doran’s time of 22 mins 18 secs saw him finish ahead of George Snee from Fidelity Instruments in 22:24 and Ross Hurley in 22:28. In the graded team categories, Bank of Ireland won both A and B, and finished second in C behind ESB. Revenue teams finished first and second in grade D.

A clear winner of the women’s two-mile race in 12 mins 38 secs was Laura Buckley, with her Teachers team mate Eva McNelis second in 13:21 and Claire Ní Fhaircheallagh third and first W35 in 13:36. With Ashling Smith finishing ninth, the Teachers finished first team ahead of Health A and HSE. The race, part of the Lord Mayor Series, had a massive 332 finishers.

Some women opted for the longer distance race with Rachel Yorke of Deloitte the best of the bunch. Next BHAA race is the ALSAA cross-country at Dublin Airport on Saturday February 15.

Gemma Whitehouse made it an Acorns AC double when she won the women’s 3-mile race; team winners were Victoria Park and Coniston AC.

The races were held in memory of the late Irwin Speirs, a highly respected masters’ athlete and coach of Acorns AC who died suddenly last December.

In the women’s short race, Louise Shanahan of Leevale AC, a PhD student in physics at Cambridge University, finished fifth. Shanahan, a track specialist, competed at the European U23 Championships in Sweden last summer.

At the Fox Trail winter series in East Lothian it was Irish ultra runner Nicola Duncan who victorious over the half marathon distance event.  The muddy trail race saw Ian Logan of Linlithgow AC the men’s winner in 1:26:36 and Duncan ran 1:35:39, whilst training for her first ultra race of the season at the Madeira Ultra Trail. Follow the speedster’s preparation in the Fast10 blogs.

In the mountains outside Barcelona, Spain, last year’s IMRA World Cup Winner was getting her season into action. Sarah McCormack won the women’s race with a strong performance and it was actually a Yorkshire 1-2-3 on the men’s podium. We’re exited to see how well McCormack runs again in 2020, seemingly going from strength to strength every year.