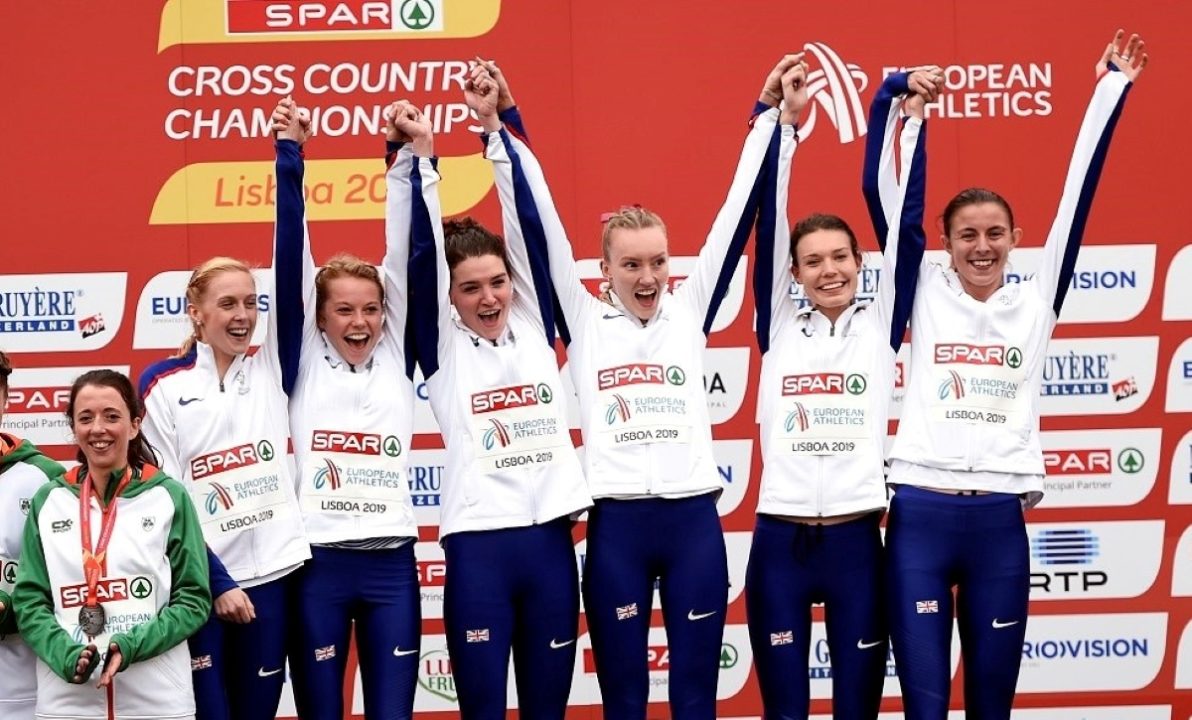 Andy Butchart led the men’s team to a golden victory over their 10k course at the European Cross Country Championships this weekend. Butchart placed 5th and was joined in the three-to-score spots by trials winner Ben Connor who snuck his way into the top ten to place 9th and Kristian Jones who secured the top podium placing by finishing 22nd. Patrick Dever ran to 26th, team captain Adam Hickey 36th and Tom Evans 44th. Belgium took team silver and Spain bronze. Robel Fsiha of Sweden won the individual men’s race.

After a long wait watching all the other races, an experienced team of Senior ladies hit the 8k course in Libson, Portugal. Reigning champion Yasemin Can of Turkey dominated from the start and kept her individual title but convincingly bringing it home for Britain were Jess Judd in 6th, Charlotte Arter in 7th and a standout performance from Abbie Donnely in 13th. Amy Griffiths took 15th, Jenny Nesbitt 29th and Kate Avery 30th.

Ireland’s Fionnuala McCormack, who has been eating XC for breakfast for 16 years, ran a great race showing confidence by holding back early on and then powering up the hills in the latter stages. Sadly she couldn’t quite catch Sweden’s Samrawit Mengsteab on the final straight through and leaves Lisbon with a 4th place. She does however take home a sliver team medal.

In the mixed relay GB bagged another Gold thanks to the sterling efforts of Sarah McDonald, James McMurray, Alex Bell and Jonny Davies who brought it home in the anchor leg.

Hardest race I’ve ever done! Makes it all worthwhile finishing 6th individually and 1st team, especially with my lovely roomie who is probably the nicest person you’ll ever meet! Extremely grateful to share this experience with such a lovely team! 😊💗 pic.twitter.com/o1emW94kU0

Bronwen Owen ran her first U23 XC for her country and held on brilliantly for a 7th place despite the tough course sapping her energy with a lap still to go. Owen led home the rest of the U23 ladies to a bronze team medal with Amelia Quirk taking 15th, Poppy Tank 18th, Hannah Nuttall 31st and Eleanor Bolton 33rd.

Mahamed Mahamed has plenty of experience in the U23’s and was up for a fight, pushing hard and getting himself into third for some of the race. He was disappointed with an eventual 8th place finish but can claim top GB runner in his category. The U23 gents placed 4th in the team rankings with Alex Yee in 12th, Sol Sweeney 29th, Euan Makepeace 56th and Emile Cairness 60th.

Golden trip for the u/20s

In the U20s women’s race the team rankings were as much of a roller-coaster as the undulating course as Italy and GB tied for first place, with Italy initially announced as having taken the Gold only to have that changed to give GB the top-bling. That decision was made because Britain’s 6,11,12 placings were better than Italy’s 1,3,15.

Kicking off proceedings the U20 GB lads set the team-gold tone for the day thanks to a convincing 13 point margain to take yet another team-gold ahead of Norway (including one rather well known Jakob Ingebrigtsen who romped home to his 4th solo title) and Ireland. Charlie Hicks had a fantastic race to finish 5th, Matt Willis was 9th and Zak Mahamed 11th. For the rest of the team Will Barnicoat ran home in 22nd, Hamish Armitt 31st and Matthew Stonier 72nd.

Verity Ockenden moved to 3rd on the AT UK indoor 5000m rankings as the Tony Houchin coached athlete clocked 15:34 at the Sharon Colyear-Danville meet at Boston University in the US.

Back in the UK and on the roads there was one race that dominated the racing this weekend. The Telford 10k was a riot of talent with 159 runners sub 35 in the men’s race and 56 women sub 38. Samantha Harrison of Notts AC led home the women in 32:33 (PB 33:29) followed closely by Dani Chattenton of the MK Distance Project who updated a rather old 10k PB by over 10 minutes to 32:37. Third place went to Welsh athlete Clara Evans in 33:08, also a PB. With times that would normally secure you a podium spot, AFD’s Lauren Hall had to settle for 4th and a PB in 33:16 and City of Stoke’s Kate Holt 33:18 gained her 5th place – not bad for your first recorded 10k!

Back from his win in Ireland at the Bobby Rea International Cross Country, Adam Craig gave his coach Steve Vernon an early Christmas present in the form of a number one spot and 30 second PB. He broke the tape in 28:31. Birchfield Harriers’ Omar Ahmed was second in another PB of 28:38 and third place went to Serpentine’s Callan Moody in 28:56 (PB). Jack Gray was 4th with a fine 28:57 with Welsh marathoner Josh Griffiths 5th also in 28:57 (PB).

The sheer depth of field leaves us wanting to spend all day on these results but we have to stop somewhere so if you want to go and marvel for yourself, check out the full results here. There were some particularly impressive results for masters athletes notably V45 Will Green (30:31) and V55 Claire Elms (36:54).

Many Cross Country leagues held their final races before Christmas. Full results and links to pending results are below, where possible.

Horspath, Oxford may not sound quite as glam as Lisbon but there was an equal amount of grit on show there at the SEAA County Cross Country Inter Counties Championships. Essex’s Elisabeth Davies (22:21) led the women home, followed by Lily Coward (22:40) for Kent AC and Rachel Wiseman (22:53) took third to cement Essex’s team win.

In the Liverpool and District League Ross Harrison of Liverpool Pembroke & Sefton AC was first home in the Senior Men’s race. The women’s results are tbc. At London’s Met League match the river crossing proved no barrier to the win for Herts Phoenix runner Elizabeth Janes or Dylan Evans of Shaftsbury Barnet Harriers both of who claimed victory in their Senior races. Michael Ward (Uni of Birmingham) was winner in the Birmingham League but again, women’s results are tbc.

British athletes shine in the Caribbean

Run Barbados was hosting a range of events this weekend from 1 mile to 26.2 of them and two UK ladies have been making their mark. Sarah Inglis came first in the mile race in 5:01, Natasha Wodak won the 10k in 36:09 with Inglis second in 36:20 and both ladies were due to run the half marathon this morning. Inglis has won two years in a row and will be looking to retain her title – results tbc. The Reggae Marathon in Jamaica was won by Ros Ponder, time TBC.

Yup. Just won the Jamaican marathon! 🏆 (giant trophy for overall winner, additional little trophy for being so old) A relentless course in boiling conditions 🥵 with no marathon training in my legs… but nothing like a bit of reggae and the world’s friendliest people to keep you going. #onelove #jamaica #reggaemarathon #marathon

Festive fun on the UK roads

The Milton Keynes Winter Half saw a convincing win for under 20 Heathside athlete Seyfu Jamaal in 66:05 with the winning woman Johanna Sharples running 83:53. The men’s podium was completed by Edward Mallett (70:39) and Ryan Hogan (74:17). 2nd and 3rd in the women’s race were claimed by Ginevra Stoneley (85:01) and Olympian Claire Hallissey (85:23).

At the Willowbrook Halewood 5K Series Thomas Boardman of Leigh harriers won in 15:57 and Louise Jackson of host club Knowsley Harriers finished first for the ladies in 19:31. At the Beccles Turkey Trot 10 Matthew Jeffries (Waveney Valley AC) trotted his way home to first place running 10 miles in 54:47 with a 4 minute lead on his nearest rival. Waveney took top sport in the women’s race too thanks to Samantha Jacks running 1:03:29.

2:10:17 for Pollock – Irish weekend round-up
Putting it on the line for Ireland in Lisbon