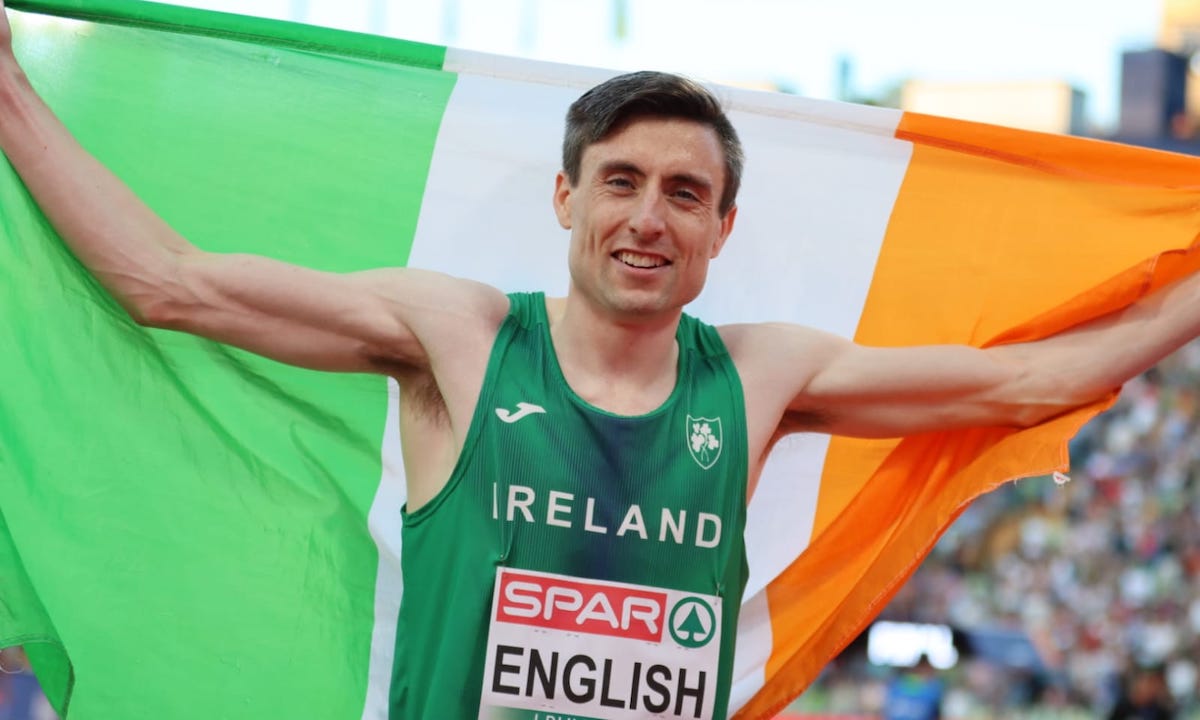 Ciara Mageean and Mark English were the toast of the Irish team at the European Track and Field Championships, in Munich, Germany which ended on Sunday (August 21).

On Friday, Mageean was a battling second place behind Great Britain’s Laura Muir in the women’s 1500m, running a season’s best time of 4:02.56

Only a fortnight ago, Mageean, representing Northern Ireland, also finished second behind Muir, representing Scotland, in the 1500m at the Commonwealth Games in Birmingham with a time of 4:04.14. It was just rewards for a hard-working athlete who as long ago as 2010 had taken silver in the 1500m at the World U20 Championships and who was third over the same distance at the 2016 European Championships. Other good performances in the middle and long distances, came from Fionnuala McCormack, seventh in the women’s marathon in 2:29.25. With AnnMarie McGlynn 29th in 2:38.26 and Aoife Cooke 34th in 2:40.37, the team finished fifth.

In the 5000m races, which were straight finals, Brian Fay finished eighth in the men’s race with a time of 13:31.87 followed by Darragh McElhinney, sixteenth in 13:39.11, while Roisin Flanagan was fifteenth in the women’s race in 15:33.72. Winning the women’s race 14:50.47 was Germany’s Konstanze Klosterhalfen, who trains in the USA where she’s coached by Sonia O’Sullivan.

Also attracting attention were the sprinters — the ultimate “fast runners”, although usually not covered in this report.

Rhasidat Adeleke and Israel Olatunde made the 400m and 100m finals respectively rewriting the Irish record books on the way while the women’s 4 x 400m relay squad finished sixth in the final.

As for the technical events, what about Sarah Lavin’s fifth place in the 100m hurdles? Overall, an excellent performance from Team Ireland as a packed track and field season draws to a close.

Conán McCaughey of North Belfast Harriers was the winner of the Northern Ireland 10,000m Championships held at the Mary Peters Track, Belfast on Saturday (August 20).

Paul O’Donnell of Dundrum South Dublin AC and Shona Heaslip of An Riocht AC were the winners of the St Finbarr’s Cork 10-Mile on Saturday (August 20) — the final race in the 2022 Kia Race Series.

O’Donnell led over a thousand finishers home crossing the line in 49 mins 52 secs, with his DSD AC team mate Robert Corbally second in 53:36 and Patrick Hennessy of West Waterford AC third in 53:52.

Individual men’s winner of the seven race series was O’Donnell, with three wins and a second. William Maunsell of Clonmel AC with a win, a second and two third places was second.

Lizzie Lee of Leevale AC, who did not run on Saturday, had already done enough to take the overall women’s title ahead of Maria McCambridge of Dundrum South Dublin AC, who ran all seven races in the series.

In Dublin, Peter Somba of Dunboyne AC took his second victory in the Dublin Marathon Road Race Series when he won the Frank Duffy 10 Mile in the Phoenix Park also on Saturday.

Somba’s time of 51 mins 14 secs saw him finish seven seconds ahead of Josh O’Sullivan Hourihan from Donore Harriers, an international orienteer, who finished in 51:21. Third in 52:10 was Martin Hoare of Celbridge AC.

Kate Purcell of Raheny Shamrock AC, better known as a mountain runner, was first woman in 59:31, with Caitlyn Harvey of Annadale Striders second in 60:09 and Niamh Clifford of Donore Harriers third in 60:20.

Some entries are still available for the Saturday final round of the Dublin Marathon Race Series – the Dublin Half Marathon in the Phoenix Park – on Saturday September 17.

5km to 10 miles and all the distances in-between

Winner of the Stormin’ the Castle 10km in Carrickfergus, Co Antrim, on Sunday (August 21) was Brhane Gebrerhan of Annadale Striders in 32 mins 9 secs, with John Black of North Belfast Harriers just two seconds behind for second place and Debbie McConnell of Jog Lisburn RC first woman in 39:21.

On Friday evening (August 19), Cian Kelly of St Abban’s AC and Nicola Welsh of Dunleer AC were the winners of the Rathkenny 5km in times of 15:22 and 19:39 respectively.

In a weekend packed with ten mile races, Dessie Burke in 55 mins 39 secs and Caroline Coulter in 70:43 were the winners at the Wild Atlantic 10-Miler, in Belleek, Ballina Town, Co Mayo on Sunday (August 21), while at the Termonfeckin 10-Mile in Co Louth the same day, the winners were Shane Toner of Glenmore AC in 55 mins 15 secs and Laura McDonnell of Rathfarnham WSAF AC in 59:20. Club winners were the Glenmore men and the Clones AC women.

Mountain runners dominated the Man O’ War Round 7km in north County Dublin on Thursday (August 18), where Killian Mooney of Dundrum South Dublin AC was the winner in 23 mins 20 secs followed by Ian Conroy of Raheny Shamrock AC in 23:48. First woman was Aoife Parrella of Star of the Sea AC in 29:09.

Kevin Moore of Moate Dundrum AC was the winner of the Castlepollard 5km in Co Westmeath on Wednesday evening (August 17), finishing ten seconds clear of Eoin Flynn of Rathfarnham WSAF AC with a time of 15 minutes exactly. Third was Vinny Connolly of Mullingar Harriers in 15:15.

First woman in 16:52 was Maria McCambridge of Dundrum South Dublin AC. Fiona Gettings of Longford AC was second in 17:31 and Emily Grennan of Tullamore Harriers third in 17:45. Ben Crammond of Parnell AC and Catherine Devitt of Glendalough AC took the titles at the inaugural Wicklow Off-Road Championship 10km held around the trails of Derrybawn in Laragh, near Glendalough, on Saturday (August 19).

Crammond was the runaway winner of the race, finishing in a time of 38 mins 49 secs. His Parnell clubmate Ben Kinsella finished second in 41:19, with Ray Kenny, also Parnell AC, third and first M40 in 43.35.

Parnell AC was a comfortable winner of the men’s team title with the minimum possible points and also took the women’s title.

Inbhear Dee was best of the M35 teams with Glendalough AC first M50 team; Lakeshore was first W35 team ahead of Parnell.

Winners of the open race were Liam Mooney in 46:28 and Sinead Lambe in 49:01. In the Run the Ridge Open 20km, Richie Power was the winner in 95 mins 0 secs. Stephen Hurley of Crusaders AC was second in 96:42 and Paddy Hamilton of Slieve Gullion Runners, who missed the race start by about fifteen minutes, third in 98:47. Aine Kenny of Crusaders AC was first woman in 1:54.15, followed by Alicja Pilarkas in 2:00.26 and Eilidh Roberts of Oxford University Cross-Country in 2:01.29.

Winners of the Montalto trail races the same day were Paul Brear Clarkson in 41:48 and Alice Brear Clarkson, third overall, in 42:25. Both are members of East Down AC.

Elviltas Quigley was the winner of the Longford Trail Series Day 3 race held on Wednesday (August 17) at Derrycassin Woods in 19 min 40 secs. Fifth and first woman in 21:25 was Rachel Keenan of Longford AC. The final round in the series takes place next Wednesday in Newcastle Woods.