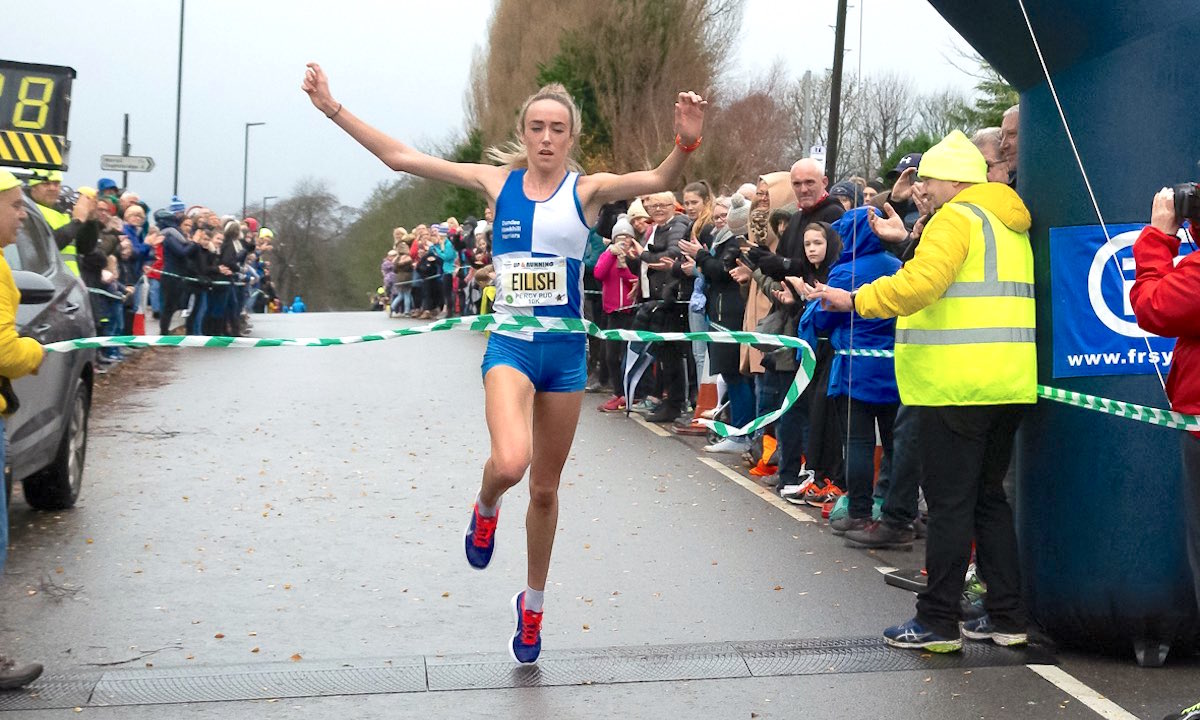 The pair star in Sheffield, while runners also impress in Barrowford, Valencia, Nottingham and on the country.

Jack Martin set a new course record of 29:13 at the Percy Pud 10k in Sheffield on Sunday (December 2), while Eilish McColgan was close to her own record – which was set in last year‘s race – running 32:39.

Martin’s time was also a improvement on his previous PB set at last month’s Leeds Abbey Dash 10k, where he finished runner up.

Hallamshire’s Andrew Heyes is an athlete on top form, and put his non-selection disappointment for next weekend’s European Cross Country Championships to one side when running a superb 29:31 to finish second. McColgan appears to be unstoppable on the roads this winter. Her latest victory here represents her third title on the tarmac in six weeks, following up on wins at the Great South and the Wilmslow 10k.

She headed off second placed Natasha Hartswell’s 35:48 with ease, while Leeds City’s Rachel Friend was third lady in 36:28.

The cross country season is well underway by now, with courses finally beginning to represent ‘proper’ British muddy conditions following on from a week of heavy rain.

Heanor’s course at Shipley Park was no exception when hundreds descended on the Derbyshire venue for the latest North Midlands League fixture on Saturday (December 1).

Lincoln Wellington’s Jake Richardson took his first senior title in style when he fought off stiff competition from Heanor’s Joe Rainsford and Derby’s Joseph Kilgour. Richardson’s time in victory was 33:07 on the hilly 10k course.

Winning the women’s race was Newark’s Cloe Hubbard. She trounced the competition in a speedy 27:55 on the 6k course, with Derby’s Jasmin Cooper and Peterborough’s Chloe Findlay trailing in her wake.

Also providing a real muddy challenge to competitors was Saturday’s Metropolitan League‘s latest fixture at Uxbridge, with runners wading (and falling headfirst into) deep rivers and bogs along the way.

The men’s was won by prolific racer Paul Martelletti, again for VPH & TH, with Roger Poolman and Samatar Farah never far behind in second and third.

The latest FNB cross country league in Guernsey was held at the island’s Home Farm venue on Saturday (December 1).

James Priest dominated proceedings on the 6 mile course when he took his third cross country win in a row, securing him the FNB winter title already. Chris Gillman enjoyed one of his strongest races to date but he was no match for Priest, while Carl Holden was third. Jenny James took advantage of Sarah Mercier’s break from racing and, with a DNF for Louise Perrio, James took the win on the 4 mile course ahead of Emily Bookless and Mel Nicolle.

Returning to the roads there was plenty of festive cheer at the Bromham Pudding Run 10k in Bedfordshire on Sunday (December 2).

Southampton’s Sarah Kingston was the first lady across the line in 37:38, well clear of any rivals in sight. That said, second placed Freya Spruit was second in 39:59 at the tender age of just 16! Her Team Bath club mate Laura Backhouse was third in 40:56.

Avon Valley’s Michael Towler was the men’s victor in 33:15, ahead of Mark Threlfall’s 34:07 and Team Bath’s V35 James Donald’s 34:21, which represented a PB for third placed Donald.

Christmas was the theme at the Nottingham Half Marathon on Sunday too (December 2), with some super fast times earned by those perhaps gunning for their first mince pie of the season.

Caistor’s Nick Martin took the top spoils in 70:59 with plenty of breathing space from his nearest competitor. Tony Woodward from the race’s home club Nottingham was second in 72:05, while Hinckley’s Simon Birch took the final podium place in 74:54.

Sam Harrison was the first woman by a mile when she took the first lady’s prize in 83:46. Steel City Striders’ Ashleigh Barron was still a worthy second in 90:43, while South Derbyshire’s Jenny Laing did well for third in 91:52.

Steph Twell ran a superb 2:30:12 on her debut over 26.2 miles at the Valencia Marathon on Sunday. Twell finished seventh and her time is the second fastest by a British female athlete this year.

In the men’s race, Highgate Harriers’ Chris Rainsford was the first British athlete across the finish line clocking a fantastic 2:21:45 debut, while Brighton and Hove’s Kevin Rojas posted a strong 2:22:43.

Fast Running‘s Robbie Britton, who has been sharing his journey towards a sub 2:30 marathon, achieved his goal clocking 2:29:32 in the Spanish City.

A full report from Valencia can be found here.

Jamie Webb clocked 14:33 and Olivia Mason ran 16.55 as the pair took the victories at the fifth edition of the Podium 5k on Saturday evening (December 1).

At the @podium5k last night, @jamiewebb800 clocked 14:33 to take the men's win, while women's winner Olivia Mason ran 16.55 to record the second fastest time by an under 20 female this year.

Sean Antell and Hayley Carruthers ran the fastest parkrun times in the UK on Saturday. This week’s top 10 times can be found here.