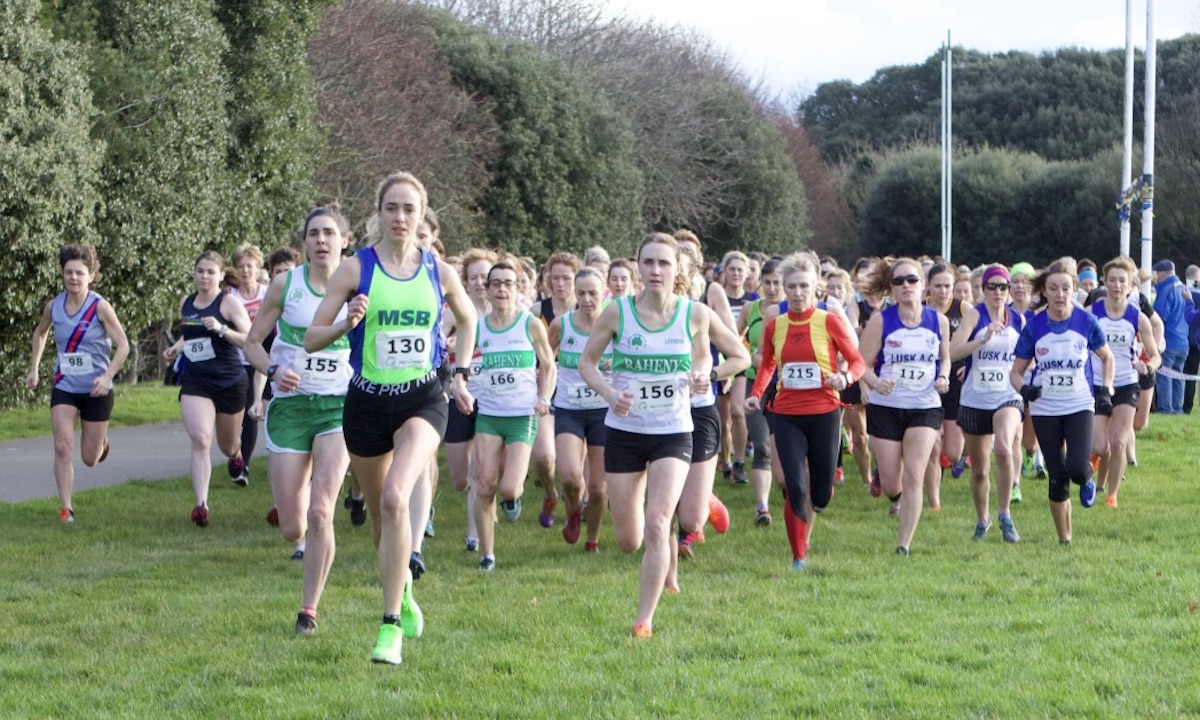 After Christmas and New Year celebrations eased down, everyone’s back on the cross-country and the roads, with Lindie Naughton reporting on the action.

O’Neill, in her first season as a master, made an early break and was on her own for much of the women’s 4000m race. Only in the final stages of the race did Kate Purcell of host club Raheny Shamrock attempt to narrow the gap.

By the finish line, the difference between the two was only two seconds, with O’Neill finishing in 11 mins 55 secs.

Third and first W50 was double European masters’ champion Annette Kealy in 12 mins 25, while fourth and first W40 was Sarah Quigley of Raheny Shamrock. In the W35 team competition, Sportsworld beat Raheny Shamrock on countback, with both teams scoring 44 points. Third was Donore Harriers. Raheny were comfortable winners of the W50 category, with Blackrock AC a distant second and Sportsworld third.

Rooney, a clear winner of the men’s masters race at last October’s Autumn Open, led the men’s 6000m race from the start. As the laps counted down, he pulled further away, winning in 20 mins 10 sec. Finishing second in 20:58 was Pierce Geoghegan of Liffey Valley AC while third for a second year was Karol Cronin of Sportsworld AC in 20:58. When it came to the teams, Raheny Shamrock dominated, winning both the M35 and M50 team categories. In the M35 race, a better run by their fourth counter gave them a two point victory over Rathfarnham WSAF, with Sportsworld AC third. At M50 level, they led home an impressive 14 teams, with Donore Harriers and Rathfarnham WSAF AC second and third. It meant Raheny won three of the four team categories, only missing a clean sweep on count-back.

5km sprints on the cross country

Sean McGrath of SMG Garden Maintenance was the winner of the ESB BHAA 5km Cross-Country at Cork Constitution Rugby Football Club on Sunday (5 January) – the only cross-country race on the Cork BHAA calendar.

His time of 16 mins 36 secs put him comfortably clear of Shane Cooney from PM Group who finished in 17 minutes exactly and was first M40. Third and second M40 was Patrick Roche of Surehaul Renault-Trucks in 17:09.

First woman and 12th overall was Grainne O’Donnell of Kuman Douglas in 18:54, with Jennifer Goggin Walsh of Novartis one place behind and second woman. Third woman in 20:09 was Linda O’Connor of Musgrave. In the team categories, Apple won men’s grades A and C as well as women’s grade C. Novartis won women’s grade A. Grade B winners were the Dell-EMC men and the Fit 4 Life women.

In a busy few weeks for BHAA running, the Bank of Ireland BHAA Cross-Country 6km takes place next Saturday (11 January) at Tymon Park in Tallaght and the Dupont FMC 5km a day later in Cork. Membership for 2020 is open at www.bhaa.ie and www.corkbhaa.com with new companies and individuals always welcome to try the original corporate challenge!

No national records on the roads shocker

Gerry Forde of Slaney Olympic and Ciara Wilson of DMP AC were the winners of the Ferrycarrig 5-Mile in Co Wexford on Sunday (5 January).

We did think no records were broken in this race with Forde finishing in 25 mins 10 secs and Wilson in 28:41, but Elizabeth Egan informed us on Twitter then Wilson broke Fiona Kehoe’s previous best of 29:16 by over 30 seconds.

Hiko Tonosa of Dundrum South Dublin began 2020 on a solid footing with victory in the Tom Brennan 5km on New Year’s Day in Dublin’s Phoenix Park.

First woman in 16:53 was Catherina Mullan of Metro St Brigid’s AC. Barbara Cleary of Donore Harriers was second and first W45 in 17:11 with Ciara Wilson of DMP AC third in 17:16. First junior was Celine Gavin of Dublin City Harriers.

With 22 women’s teams entered, Dublin City Harriers came out on top ahead of Dundrum South Dublin and host club Liffey Valley. Best of the 17 men’s teams was Raheny Shamrock, followed by Liffey Valley and Rathfarnham WSAF.

In Galway, teenage wheelchair racer Shauna Bocquet of Craughwell AC led home the finishers at the Resolution Run 5km in the Claddagh area of the city on New Year’s Day.

Bocquet finished in 15 mins 17 secs, and was followed home by her Craughwell team mates Sean Cotter and Damian O’Boyle, who both broke 16 minutes. First woman (without wheels!) was Regina Casey of Galway City Harriers in 18:24.

McColgan wins in NYC & XC Champs are crowned – weekend roundup
Fast10: The class of the 2020