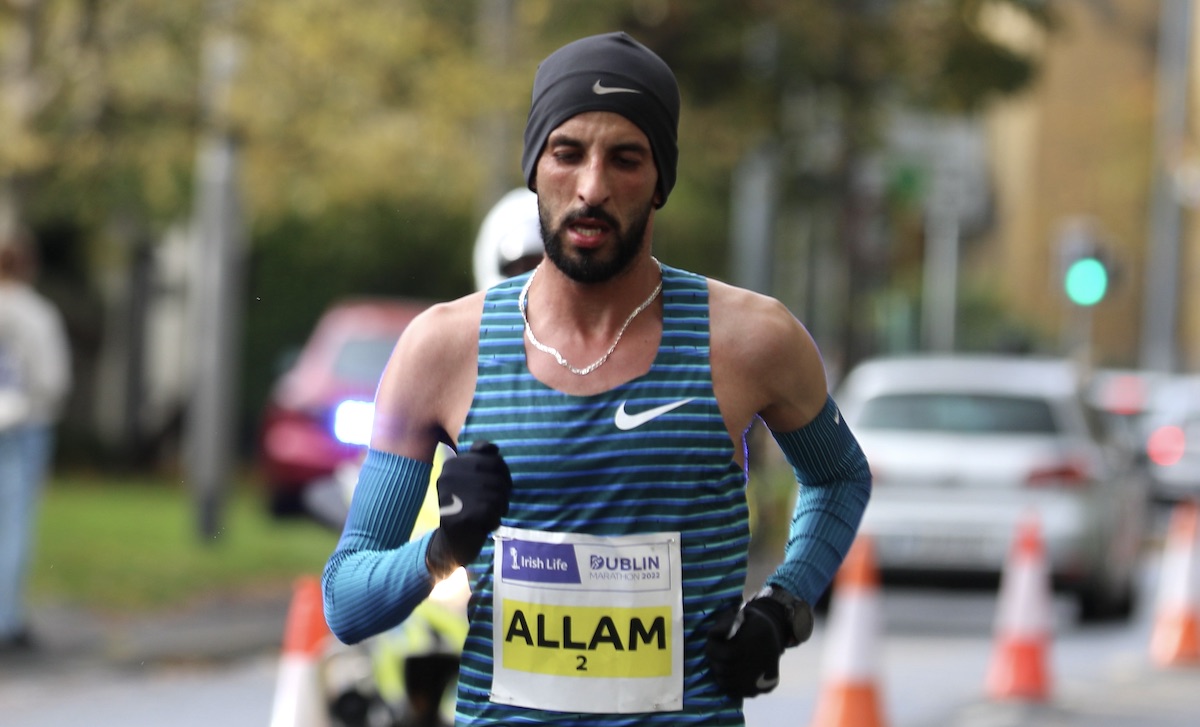 A fine October day saw 25,000 runners supported by big crowds in the return of the Dublin Marathon. Lindie Naughton was there to bring you all the action.

On a clear bright morning in Dublin, Taoufik Allam of Morocco raced to a clear victory by almost two and a half minutes at the 41st Dublin Marathon on Sunday (October 30) finishing in 2 hrs 11 mins 30 secs.

Allam broke clear just before 21-mile mark when he pulled away from two Ethiopian athletes – Ashenafi Boja second in 2:13:59, and Birhanu Teshome third in 2:14:26

Martin Hoare from Celbridge was taking a first national title when finishing seventh overall and first of the Irishmen in a lifetime best of 2:20:22 Conor Gallagher from Belfast, who had led the race up to the twenty mile mark, finished eighth place overall and second Irishman in 2:22:57, while third of the local athletes was previous winner Sean Hehir, now with Wexford club, Croghan AC, ninth best overall in 2:24:19.

It was a remarkable return to form for Hehir, who only six weeks after running a personal best 2:16.01 at the 2019 Dublin Marathon, was hit by a car when on a training run suffering broken facial and shoulder bones, as well as cuts, bruises and concussion.

One place behind Hehir and first M45 was the evergreen Gary O’Hanlon of Clonliffe Harriers in 2:25:15.

O’Hanlon and Hehir were just two of five previous men’s champions completing the course. Sergiu Ciobanu of Clonliffe finished 22nd overall in 2:31.32, defending champion Mick Clohisey of Raheny Shamrock AC was just behind Ciobanu in 2:31.39 while Gary Crossan of Brothers Pearse AC, while not in the top hundred, completed the course in respectable 03:07.32 In the women’s race, Clonmel AC athlete Courtney McGuire, running her first marathon at the age of 23, crossed the line in an eye-catching time of 2: 32.52 to finish third overall and first Irishwoman. McGuire, a relative unknown, first made the news last August when she ran a time of 73 mins 45 secs at the Larne Half-Marathon.

Ahead of her on Sunday were two Ethiopian athletes – Nigist Muluneh who won the race in 2:28:32 and Hawi Alemu Negeri second in 2:29:35.

Since the first Dublin Marathon was held in 1980, just seven men and one woman have lined up every year since. First home of the ‘All-Timers’ in 3:18.21 on Sunday was Martin Kelly of Raheny Shamrock AC who, when he first completed the race, had just left school. He now competes in the M60 age group, along with Seamus Cawley from Rathkeale in Co Limerick, another ‘All Timer’ who finished in 4:12.31 on Sunday.

Also making it to the finish line, despite having her training hampered by illness and injury, was Mary Nolan Hickey from Arklow, now a spritely 70, who got around the course in 5:42.03 — about an hour faster than she had expected.

Not too far behind Hickey was Dave Brady of Raheny Shamrock AC, who at the age of 72 completed his 1,010th marathon in 6:02.60. Before the two years of lockdown scuppered his plans, Brady had hoped to run his 1,000m marathon at the 2020 Dublin Marathon. He managed that feat in Longford last August and has kept going since then. A number of people turned out in fancy dress, most notably Paul Boyle, who ran with a hurling camán attached to — and seemingly through — his head, with some fake blood and a dismembered hand for decoration. He finished in 3:55.16.

Leading everyone home for a sixth time was Paralympian Patrick Monahan of the Le Cheile club in Co Kildare. His time of 1:37:31, his fastest ever for the Dublin course, Monahan has recently completed marathons in Chicago and London, both in sub 1:35 times. Next up for him is the New York Marathon. At the Saintfield 10km/5km on Sunday (October 30) , Jonathan Scott of Mourne Runners in 34 mins 15 secs and Alice Bear Clarkson of East Down AC in 40:29 were the winners of the 10km. First home in the 5km was David Spalding of Ballydrain Harriers in 16:35; Ruth McCausland was first woman in 21:41.

Conan McCaughey of North Belfast Harriers led home over a thousand finishers at the annual Spooktacular 5km in Enniskillen on Friday evening (October 28).

McCaughey finished in 15 mins 1 sec — eight seconds ahead of JP Williamson in 15:09 with Declan reed of City of Derry Spartans third in 15:36. First woman in 19:19:32 was Niamh Heaney , who was closely followed by Natalie Hall of Annadale Striders in 19:35. Third in 20:14 was Aoibhin McCormack of Glaslough Harriers.

Also attracting large numbers was the Sandymount Night Run in Dublin on Tuesday (October 25). Ludovic de Frileuze won the 10km in 38:26 with Lynne Sherlock first woman in 44:22. In the 5km the winners were Donal Mongey in 17:47 and Ciara Broderick in 20:12.

Brian Fay of Raheny Shamrock AC finished a strong eighth place with a time of 2:57.8 at the PAC-12 Championships one of a number of college cross-country races held on Friday (October 28)

In a thrilling finish to the men’s 8km at the American Athletic Conference Championships at Mohawk Park, Tulsa, Oklahoma, Cormac Dalton and Michael Power finished second and third; just behind their Tulsa team mate Isaac Akers.

In Virginia, at the ACC Championships, Fearghal Curtain of Youghal AC finished 21st in 23:25.6 and Paul O’Donnell of Dundrum South Dublin AC 22nd in 23:26.4

Shane Bracken of Swinford AC finished 17th in the SEC Cross-County Championships in Oxford, Mississippi in 23:43.1. Louis O’Loughlin of Donore Harriers was 25th in 24:04.3.