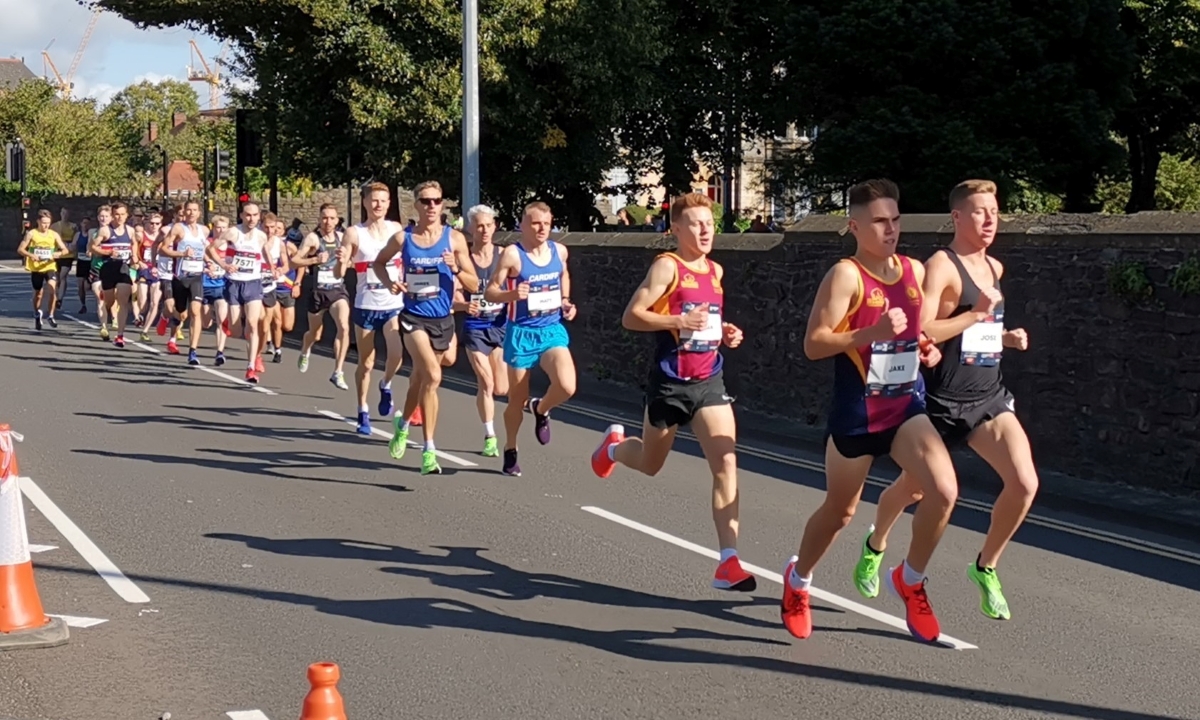 Aly Dixon breaks the 50km world record and Brits go to battle at the UTMB. The weekend was also packed with 10k races across the country, with impressively high-quality fields at Cardiff and Tonbridge.

She came, she saw, she conquered

There is only one place to start this week. Aly Dixon gave a phenomenal performance for her first, and judging by her social media last, 50k ultra, claiming herself a new world record! Dixon broke Frith Van de Merwe’s 30-year long record by 1 minute 19 seconds to win the 50km World Championships in Brasov, Romania.

It was a British 1-2 as Helen Davies join Dixon on the podium as the Ipswich Jaffa athlete also went inside the previous British record with 3:09:16. Dan Nash picked up a bronze medal and was the leading British male.

The British women walked away with a gold medal ahead of USA and Austria. The British men’s team also made the podium with a bronze medal. More details can be seen in our report here.

The Ultra-Trail du Mont Blanc (UTMB) is one of the highlights of the world ultra distance calendar. The standout British performances were the three athletes who finished inside the top 10. Tom Owens in his first 100 mile race finished 4th overall with a massive smile on his face as he crossed the line in 22:04:29. Andrew Symonds hiked his way down the finishing straight to finish 5th overall in 22:35:15.

Beth Pascall finished 5th in the women’s race in 26:26:48 having been in 3rd overall. Pascall gave the race a real crack and suffered in the second half but after finishing 4th in the Western States earlier in the year it’s been a fantastic 2019 for the Brit.

Harry Jones finished 15th in 24:03:53 overtaking 10 people between the final checkpoint and the finish for a storming closing section. Experienced ultra athlete Paul Giblin was the other British athlete to make the top 30 finishing 24th in 24:53:30.

The race was won by Pau Capell of Spain in 20:19:07 who led from the gun to take a fantastic front running victory. A group of American men chased hard but could not deal with the pace set down by Capell. In the women’s race Courtney Dauwalter came from behind to claim a stunning victory in 24:34:26 which was her also finish 21st overall.

In the 101km CCC race Holly Page finished 9th in 13:56:57 having struggled with stomach issues from the start of the race but she finished first Brit male or female. In the 145km TDS race Sophie Grant finished 11th in 26:58:53. At the inaugural Tonbridge Twilight Invitational, conditions were perfect for fast times. There were some impressive performances all the way from 800m to 300m.

The men’s 800m field was filled with high quality athletes battling it out. Mark English took the win, crossing the finish line in 1:45.98, just dipping under that 1:46 marker. English was shortly followed by Brighton Pheonix’s U23 athlete, Spencer Thomas, in a personal best time of 1:46.08. The bronze medal position went to Guy Learmonth in 1:46.31. The start of the results from a night of fast running!

The legendary 4-minute barrier was broken by two athletes in the men’s mile. Elliot Giles ran a very impressive race to win himself not only the gold medal, but a new PB. Giles dipped over the line in 3:56.47, placing him 7th in the overall men’s mile rankings in the UK for 2019 so far. Whilst James West was just over a second outside of his PB, he still gave an impressive race to claim second place. West was followed by Jeremy Dempsey in 4:00.88, just outside of the 4-minute barrier, but claiming a PB no less!

Phil Norman and Ieuan Thomas attended the meeting to have a final crack at the World Championship mark in the steeplechase of 8:29.00. Norman gave it everything and narrowly missed out finishing in 8:29.54 with Thomas crossing the line in 8:39.15. It remains to be seen whether Norman will be considered for selection to join Zac Seddon on the plane to Doha.

Over  3000m the performances continued to be high quality. The women’s race was won by Muriel Coneo Paredes in 9:10.27. The columbian middle distance Olympic athlete took a massive chunk of her previous time over the distance. The U23 Bracknell runner Amelia Quirk proved her strength, crossing the line in second place, just behind Coneo Paredes in 9:12.21. After suffering from heat exhaustion in last weeks British Champs, Kate Avery bounced back with an impressive performance at the Tonbridge race, clocking 9:23.23 and claiming third place.

The men continued to show their strength over the longer distance. The victory went to the Shaftesbury Barnet athlete, Kieran Clements, in 8:07.59. Clements did well to claim his position, with Ricky Harvie crossing the line just behind him in 8:08.72. To round of the men’s podium, Jack Gray took third place in 8:09.72, proving this event is one to put in the race diary for next year.

10k’s were plentiful this weekend, with some very impressive elite performances at Cardiff, Wilne, Wigan, and the Edgar Nicholls 10,000m.

Hayley Carruthers gave a brave performance at the Edgar Nicholls 10,000m, conquering the 10,000m distance and achieving a lifetime best of 33:03. Adam Stokes of Bristol & West AC was the first male to cross the line, taking the win in 32:01 in his 25.5 lap debut. Stokes was closely followed by Adam Peacock in 32:29 and Trevor Osborne 32:41.

Also taking place on the track at the time of publishing is the increasingly popular Ladywell 10000 with seven races taking place throughout the afternoon and evening. Keep an eye on our social media and @kent_ac on twitter for updates. The Wigan 10k was another race that saw some noteworthy performances. Philip Robertson was the first male to cross the line in 30:44, a massive 55 second PB, improving on his performance from last year’s Trafford 10k. Only 6 seconds behind Robertson in 30:55 and just 29 seconds off his own personal best was Ben Johnson from Southport Waterloo. The third male athlete in 31:45 to cross the line was Daniel Cliffe.

There were also some impressive times ran in the women’s race. Eleanor Whyman-Davis took home the gold medal in a time of 34:57, gaining herself a 4 minute 27 second lead. The second lady to finish was Carnel Edwards in 39:24.

In Derby, the Wilne 10k didn’t disappoint for some more rapid results. Alastair Watson of Notts AC took home the winning title in 30:55, a cracking time giving him a 18 second lead ahead of Freddie Hessian. Hessian and Charlie Brisley battled it out all the way through the line, with only a second separating the two runners. Hessian finished in second place in 31:13 and Brisley in 31:14. A cracking run from both athletes.

In the women’s race, Notts AC got to the top of the podium once again. Samantha Harrison ran an impressively strong race finishing in 33:29, earning herself a 3 minute 18 second PB! Behind Harrison in 35:08 was Calli Thackery with a seasons best. To complete the top 3 women across the line, Sarah Lowery claimed an 11 second lifetime best of 35:33. Some very strong running in Wilne.

At yet another 10k of the weekend, fast times were present. The Framingham 10k saw some impressive performances. The overall title went to Framlingham Flyer’s Andrew Rooke who truly did fly. Rooke took home gold in a time of 31:40, ahead of James Patterson of Ipswich. Patterson crossed the line in 32:45 and was followed by Callum Bowen-Jones in 34:28. The first woman home was Alice Heather-Hayes of Hadleigh Hares AC in 39:42.

The Cardiff 10k returned for yet another year, with an even more impressive than ever British and Irish elite field. The largest 10km race in Wales saw a stacked women’s and men’s field battle it out for a place on the podium on a beautiful day. In the women’s race, the gold medal was retained by last year’s winner and Cardiff’s own, Charlotte Arter, in 32:45. Arter was followed by Hoka One One athlete and this year Inter-counties cross country champion, Jenny Nesbitt, in a time of 32:52. Rounding off the top 3 female finishers was Clara Evans in 34:06.

The race featured a high quality men’s field boasting plenty of sub 30-minute PB’s. In total, 4 men dipped under the barrier with a close battle all the way to the line. The win went to the U23 athlete, Jake Smith, in a time of 29:30. Smith equaled his fastest ever time over the distance. In second position, and only 3 seconds behind Smith (29:33), was another one of Cardiff’s own, Matt Clowes. Ciaran Lewis was the third male to cross the line, earning himself a 2 second PB of 29:45. Arter on her way to Cardiff victory

Over the half marathon distance quick times were seen at Bedford and Maidenhead. Ash Harrell took the win in 1:09:32 at Bedford Half ahead of Michael Waddington (71:17) in second and Alex Metcalfe (73:14) in third. The women’s winning, Emma Hodson, crossed the line in 1:20.32, just 30 seconds off her personal best. Helen Bleeze was second in 83:10 and Armana Rai third in 84:17.

The Maidenhead Half featured an international masters match age group athletes from the home nations. Katherine Wood of Sale Harriers Manchester ran an impressively strong race, running herself to a 1 minute 46 second PB of 1:15:25 ahead of Annabel Gummow (76:11) and Eilidh Bell (77:54). Rob Corney claimed the men’s title in 1:07:53 ahead of Neil Kevern (68:50) and Paul Piper (69:45).

The end of the week kick started with some impressively fast performances in the Mid Cheshire Summer 5k. This fast and flat road race had plenty of PB’s from both men and women.

The women’s race saw an impressive 24 women dive below the 18-minute mark over the distance. In first place, was the Atlanta-based athlete, Emily Kearney, in a time of 16:09, a huge 41 second road 5k personal best. Following Kearney in 16:30, was the Leigh Harriers & AC’s Abigail Howarth, with yet another lifetime best, 15 second faster than her previous time. To conclude the women’s podium and add another PB by 10 seconds to the list, Eleanor Bolton crossed the line in 16:44. Some very noteworthy performances.

The men’s race was a similar, impressive story. Charlie Hulson of Liverpool Harriers & AC took home the gold title in a time of 14:21, just 4 seconds ahead of second place. Hulson was shortly followed by the Vale Royal athlete, Chris Perry, in 14:25, a time equal to his personal best set in Armagh earlier this year. The Stockport runner, Andrew Davies completed the men’s top 3, claiming bronze in 14:33. The men’s race saw a total of 15 runners dip underneath the 15-minute barrier.