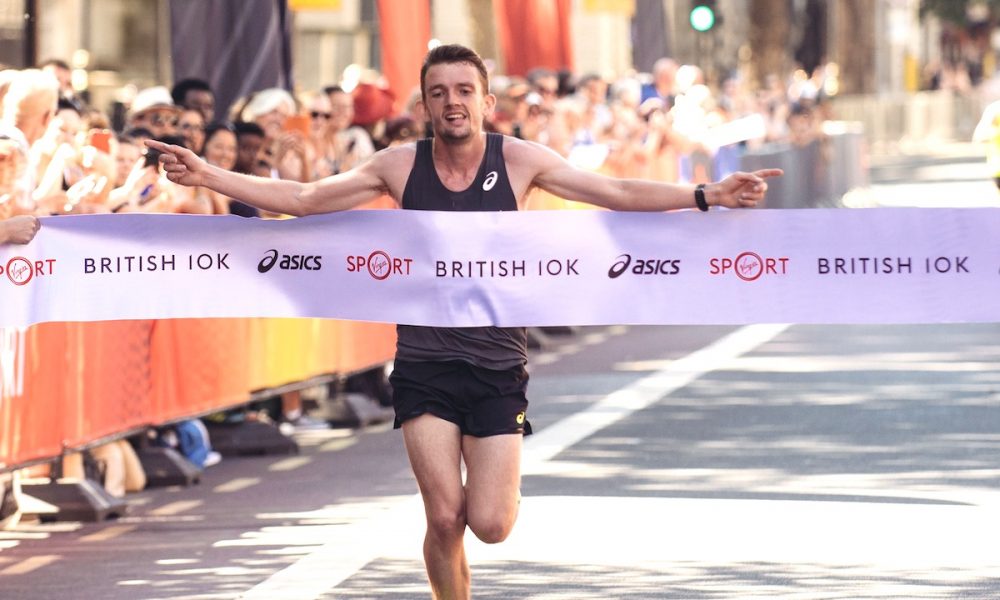 The Welsh athlete takes the honours in London as the heatwave continues to make racing hard work for runners across the UK.

British international Dewi Griffiths made his first race back count following an injury layoff with a convincing win on the streets of London.

The Swansea Harrier sustained a stress fracture just before he was due to fly out to the Gold Coast in Australia to compete at the Commonwealth Games, following the best period of racing in his illustrious career so far.

Sharp’s result was one second quicker than his third placed result at the recent London 10,000, proving his impressive consistency, while Luton’s Kimpton’s time was his best for three years.

Another athlete with an incredibly consistent streak over 10k this year is Shaftesbury Barnet’s Rachel Felton, who has run five 10k’s this year, all of which have been within 30 seconds of each other.

Her victory in London was no different when she crossed the line first in 34:56, just three weeks after winning the Torbay half marathon.

Oxford University-based American athlete Kim Horner was a clear second in 35:36, ahead of third placed Grace Lynch from Ireland, who ran 36 minutes exactly.

Several runners were heavily critical of the Virgin Sport organised event, with top GB international Richard Goodman (who came 11th in 31:19 in his first race post-injury since February) saying that “the course needs revising next year for the event to appeal to more elite athletes… too many hairpin turns slowing the pace at the front. Also, no bag drop for the elite near the start”.

The organisers’ Twitter feed gave no information about the results or the winners at any point, and at the time of writing their website still only shows last year’s results.

Top veteran Pauline Powell was a dominant winning force on the scorching hot streets of Burnley as she brought the first prize home for Blackburn Harriers in 38:16. The former England international has a 33:51 PB and the V40 is still a hugely impressive athlete, having won every event she’s contested this year bar one.

Clayton le Moors’ April Thorpe was Powell’s closest rival, coming in second in 41:32, while Sarah Ridehalgh was third lady in 41:51.

Olympian and multiple sub-four minute miler Nick McCormick has made an impressive return to the racing scene this year after a four year hiatus, but the Morpeth man was beaten into second place at Burnley by Salford Harriers’ Tom Cornthwaite, the winning time 32:32 to McCormick’s 33:08.

Cornthwaite is a top class fell and mountain runner and owns a 2:22 marathon PB, so their times truly reflected the tough conditions in the heat. The heat was on for runners taking on this popular multi-terrain 10k in the Cambridgeshire countryside, with competitors grateful for the short stretches of shade along the route.

Top international duathlete and runner Georgina Schwiening was streets ahead of her nearest rival when she won the top prize for Cambridge & Coleridge in 35:47, coming in ninth overall.

Peterborough AC’s Maggie Skinner, herself a competitive triathlete and a mum of two, was second lady in 39:52, while BRJ’s fast improving Sabrina Crothall, also a mother of two, was third lady in 40:44.

Donore Harriers’ Ken Nugent led the men in when taking victory for Ireland in 32:52, ahead of BRJ’s local race regular David Hudson’s 33:07. James Reed’s 34:16 was a good third place result for the V40.

The women stole the show at this family running festival, which also featured a half marathon event, when they took up three of the top 12 finishing positions, including second overall!

Halifax’s V45 Sarah Cumber was a force of nature when she ran 40:43 for second overall to win the women’s race by nearly seven minutes from Red Rose’s Sarah Chippendale, who ran 47:22 to finish sixth overall. Trawden’s V45 Dawn Tibbs crossed the line third lady in 51:33.

Sale Harriers’ Tom Stephenson was the only man to hold off the women’s charge, winning the race overall in 39:41, with Tri Preston’s David Chell and Michael Chagel running 43:13 and 46:13 for second and third on a very hot day in the Lancashire hills.

Fylde provided a pretty setting for the Windmill half marathon, where Woodford Green’s Ben Whitworth took the win in 78:12. Hugo Olsen was some way back in second in 80:56, while Saltaire Striders’ Tim Baldwin took third in 81:42.

Rochdale Harriers provided the winner of the women’s race, with Carly Needham earning an easy victory in 86:17. Chorlton Runners’ Alexa Besnard’s 95:07 was enough for second place, two minutes ahead of the third lady, Vicky Pitt, who ran 97:53.