Fight to the line Torun Euro Champs for Irish athletes 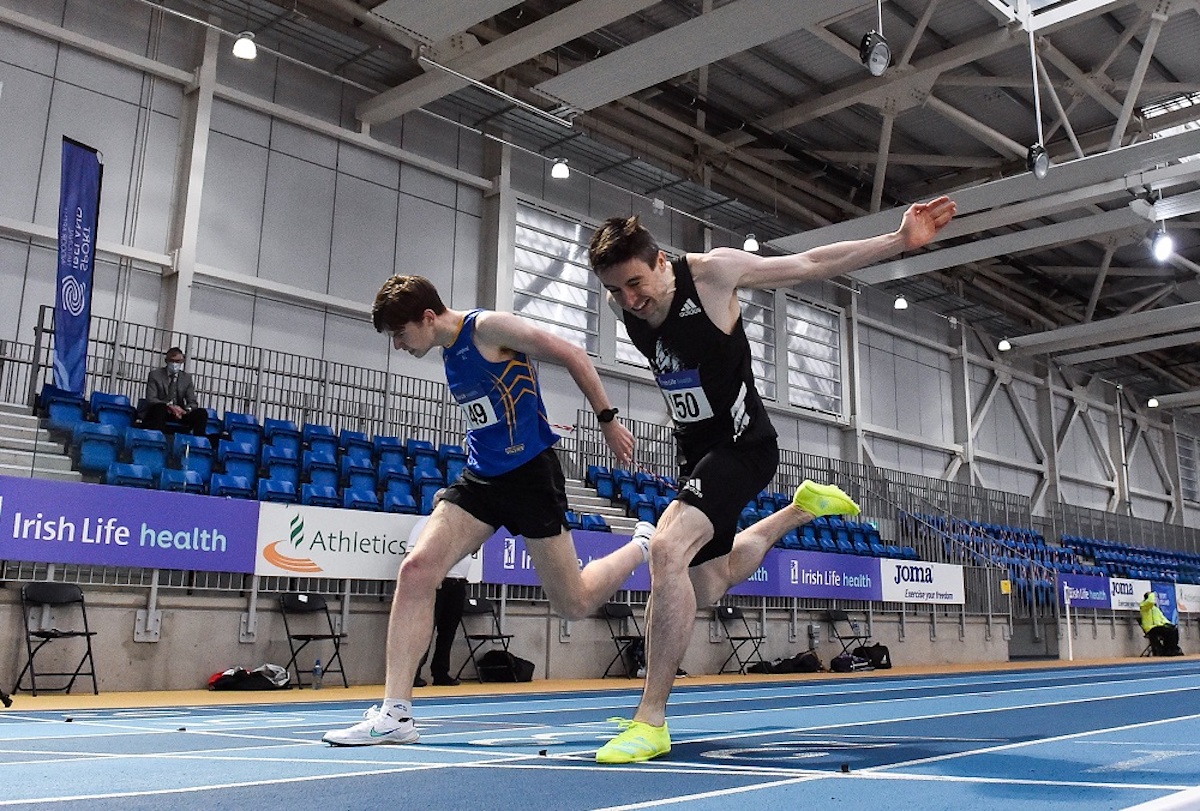 Mark English of Finn Valley AC, Donegal, right, dips for the line to win the Men's 800m, ahead of Cian McPhillips of Longford AC, left, who finished second, during day one of the Irish Life Health Elite Athlete Indoor Micro Meet at Sport Ireland National Indoor Arena at the Sport Ireland Campus in Dublin. Photo by Sam Barnes/Sportsfile

As improved shoe technology continues to result in an explosion of fast times, we’re not sure who’s wearing what on their feet and how much of an impact it is having, but we’ll keep reporting on all these new records.

Siofra Cleirigh Buttner of Dundrum South Dublin AC became the latest Irish athlete to set an Irish record when she ran a time of 2 mins 00.58 secs for 800m at the ATL Meet on Sunday (February 21).

Cleirigh Buttner’s time beat the 2:00.98 run by Nadia Power of Dublin City Harriers in Toruń , Poland last Wednesday (February 17). That time had improved on the 2:02.44 (also an Irish record) that she had run at the Vienna Indoor Meet on January 30.

Also in record-breaking form was Mark English of Finn Valley AC who made a spectacular return to racing when he he broke the men’s Irish indoor 800m record at the Athletics Ireland Elite Micro Meet in Abbotstown on Saturday (February 20).

English’s time of 1 mins 46.10 secs was also comfortably inside the qualifying time for the European Indoors taking place in Toruń , Poland from March 5-7.

In a superb race, English was pushed all the way by Cian McPhillips of Longford AC who finished a close second in an Irish U20 record time of 1:46.13. The race looked won when English passed McPhillips with 100m to go, but the youngster wouldn’t give up and the competition between the two clearly played a huge part in their new records.

Third was John Fitzsimons of Kildare AC  in 1:47.80. All three times were inside the European Indoor qualifying mark of 1:48.25.

Also qualifying for Torun with a winning time of 7 mins 50.40 secs in the men’s 3000m was John Travers of Donore Harriers. Travers was pushed hard by Darragh McElhinney of UCD who finished second in 7:50.80.  Conor Bradley of City of Derry Spartans was third  in 8:05.29 and  Hiko Tonosa of Dundrum South Dublin fourth  in 7:53.70. All times were personal bests. On Sunday, four athletes broke 2 mins 5 secs and recorded personal best times in the women’s 800m. Georgie Hartigan of Dundrum South Dublin won the chase for the line in 2:01.48, with Leevale’s Louise Shanahan second in 2:01.67, Iseult O’Donnell of Raheny Shamrock third in 2:02.29 and Claire Mooney of Naas AC fourth in 2:04.29.

A bumper Irish team of 24 athletes have been selected for the European Indoor Athletics Championships in Torun on March 5-7.

Several top Irish performers from the 2019 edition of this championships return in 2021, including medallists Mark English and Ciara Mageean, along with semi-finalist Phil Healy, while there are several performers who can additionally target a final or better, most notably 800m record breakers Siofra Cleirigh Buttner and Nadia Power, along with Andrew Coscoran, Sean Tobin and John Travers.

“It has been a remarkable indoor season so far in 2021, for many reasons, and this is reflected in both the size and quality of the team travelling to Poland,” said Athletics Ireland High Performance Director Paul McNamara.

“Despite higher qualification standards and fewer opportunities to compete, Irish athletes nailed their opportunity when it presented itself, most notably this past weekend at the Irish Life Health Elite Micro-Meet,” the PD continued. “And we now have an unprecedented 24 athletes who have earned selection for the 2021 European Athletics Indoor Championships, with many more who have posted qualification standards missing out due to the 3-athlete-per-event limit”.