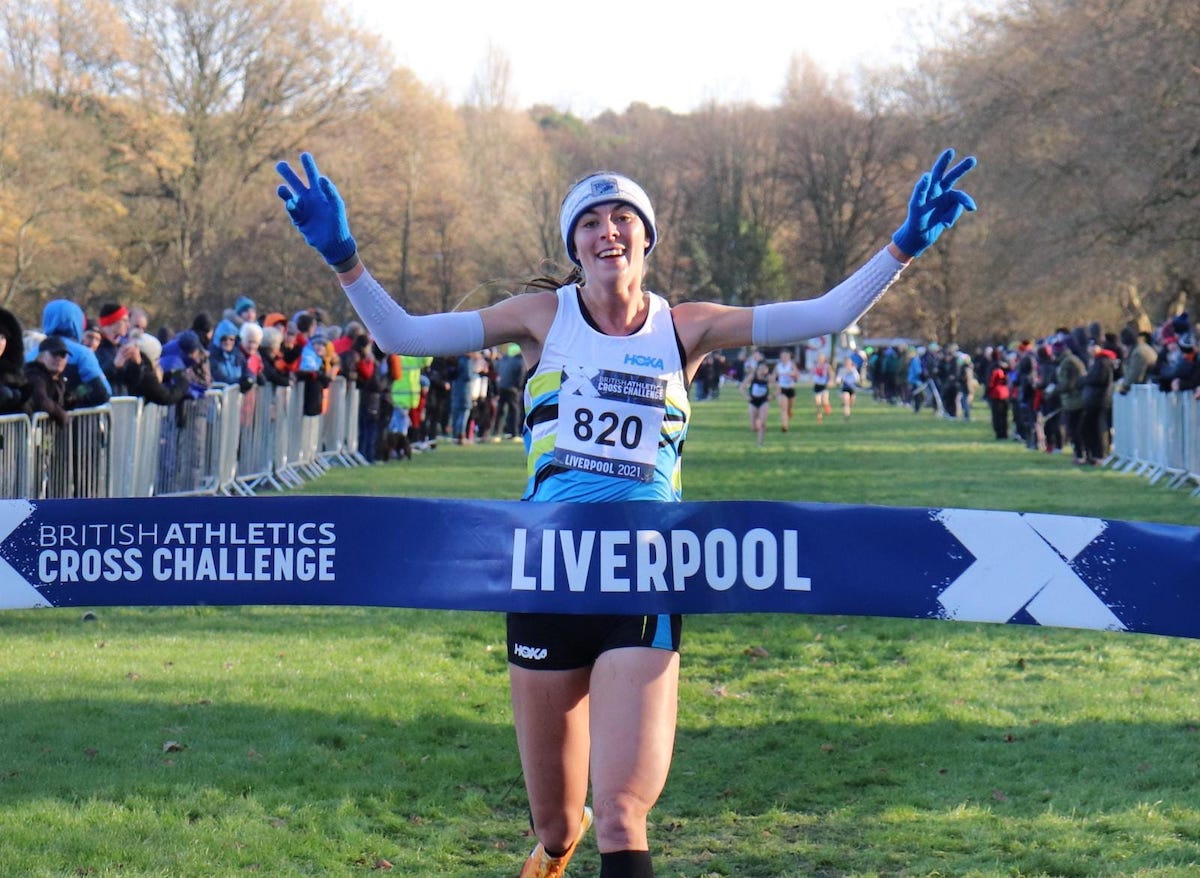 The weekend may have been one defined by freezing temperatures and stormy winds, but it did not stop a multitude of red-hot performances both at cross country and on the roads.

With the European XC Championships just a fortnight away, the British Athletics Cross Challenge series moved to Liverpool’s Sefton Park on Saturday, doubling up as a trials for the racing in Dublin on Sunday 12 December. With races across the age groups, alongside the return of a short course race for the relay team, there was no shortage of racing prowess.

The senior and U23 athletes ran in combined races, with the first four seniors and first five U23 athletes across the line guaranteed a spot for Dublin.

The women’s race saw Jess Judd, in just her second cross country race of the year after competing at the English National Relay Championships in Mansfield, move clear of a stacked field on the second of three laps to cross the line in commanding style in 26:29 over an 8.1km course, ahead of Jenny Nesbitt (26:46) and Abbie Donnelly (26:51).

Jess Gibbon finished fifth overall but as the fourth senior, securing her the last automatic spot in the Dublin quad.

Ahead of Jess was Amelia Quirk, fourth overall but the first U23 to finish, making a welcome return to racing following injury in what was her first race since the European Indoor Championships eight and a half months ago. Izzy Fry, Eleanor Bolton and Eloise Walker also booked their places in the U23 team. After a slower-than-some start and working through the pack before taking the lead in the second half of the race, Aldershot Farnham & District’s Jack Rowe took the top spot amongst the 500 plus men competing. This followed on from a comfortable win in the Hampshire League a fortnight ago and a season that has included PBs across multiple distances on the track and a win at last month’s Great South Run. He made his way round the 9.8km course in 28:05 and made sure to enjoy the support in the home straight.

It was a Central AC duo finishing second and third thanks to Andy Butchart and Jamie Crowe, the latter of whom will be making their GB debut in Dublin. They will be joined by Will who was the fourth senior to finish.

Tom Mortimer was the quickest of the U23 entrants, followed by Rory Leonard, Matthew Stonier and Zakariya Mahamed.

Henry McLuckie and Megan Keith took commanding wins in the U20 races, whilst the first races of the day saw the mixed relay team decided through two short course trials, where Alex Bell, Hannah Nuttall, Luke Duffy and Ben West secured their spots in the squad. I don’t envy anyone taking to the roads for any distance this weekend, but that did not deter people from some excellent performances in the no shortage of races that took place.

The Wilmslow 10k may have provided the fastest racing over the roads this weekend, with Matt Clowes (28:57) getting the better of Paulos Surafel (29:14) and Nigel Martin (30:07). That is a big PB for Clowes and almost a minute faster than his previous best of the year, run in Wrexham in July. Surafel was also rewarded with a two second lifetime best as his excellent season continues.

There was a near two minute margin of victory for Sophie Wood (33:40) who improved her best by over a minute. Elizabeth Renondeau (35:27) and Joanna Marsden (35:48) both finished with sub-36 minute performances.

On a pancake flat course, it was Lisa Bailey (37:43) and James Bartram (32:59) who made the most of the Ranelagh Harriers Richmond 10k, the latter just three seconds ahead of second placed Robert Eveson. Moving considerably further north to the Doncaster 10k, where Charlotte Ward (34:48) ran for the first time over the distance in two years and was rewarded with a significant PB and a race win, ahead of Georgina Weston (35:16) and Amy Hammersley (35:59). A closely contested men’s race saw Jordan Skelly (31:15) get the better of Matthew Nelson (31:28) and Lee Milburn (31:38).

To Derby next which played host to racing action over both the half marathon and five mile distances. The Derby Half Marathon saw a superb run from Thames Hare & Hounds’ Patrick Roddy, whose 67:30 took almost three minutes off his 2019 best. Gabriella Moriarty (81:57) took a similar amount of time off her best as the fastest female.

There were some good performances at the Wolverton 5 in Milton Keynes. A three-way battle between Lewis Jagger, Ben Alcock and Matt Bergin saw Lewis with a strong closing metres to finish the five mile distance in 24:05, two seconds ahead of Ben and twelve ahead of Matt. Elle Roche came out victorious in the women’s race following early group running with Hayley Munn  and Alice Ritchie. She finished in 28:46 to go tenth on the UK rankings for the year.

The West Coast Half Marathon, taking runners from Preston to Lytham St Anne’s provided James Blake (76:05) and Kath Marginson (92:48) with race wins in what I imagine were less than ideal conditions. Finally, a visit to the Wiltshire Half Marathon where Hannah Alderson (78:55) and Tom Gurney (72:08) took the honours.

Located on the streets in the town located a few miles outside Oxford, the Eynsham 10k provided Alex Miell-Ingram (31:28) and Cordella Parker (36:55) with race wins.

The fastest Brits at the Florence Marathon were Rachel Davies (2:55:33) and James Thompson (2:33:17), both setting new lifetime bests.

Eyes may have been on the goings on in Liverpool, but that was not the only cross country competition of the weekend, however the majority of results have yet to make their way onto Power of 10.

Bexley played host to the Kent League where Tonbridge’s Stephen Strange was first across the line in the senior men’s race. The senior women were not in action, with the genders alternating at competitions (and raced in the last fixture two weeks ago).

Other league fixtures pencilled in for this weekend, but for which I have not found results yet, include the East Sussex League in Wadhurst, Borders Winter League at Spittal Beach, the North Essex & South Suffolk League in Halstead and Belfast’s Malcolm Cup.