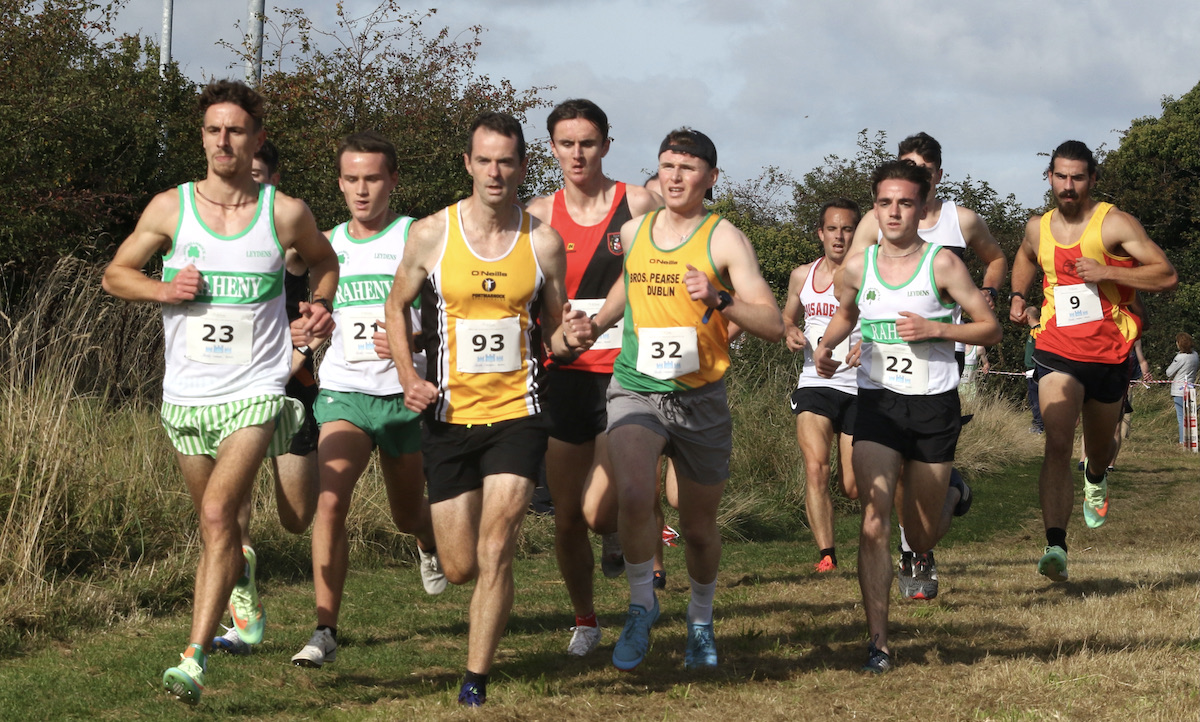 It’s great to see Lindie Naughton back out at the cross country with camera and Fast Running journalist cap on. A full weekend round-up coming your way below.

It’s not often you have athletes gasping for water at cross-country races, but that was certainly the case at the Dublin Novice Championships held under a blazing autumn sun on a bone-dry track at Tymon Park on Sunday (October 10).

Earlier, some 800 youngsters had turned out for the second round of juvenile league races, which are attracting record attendances this autumn. Winning the U18 race in some style was Lucan Harriers’s Dara Donoghue.

Leading the women’s 4km novice race from the start was Celine Gavin, running her first race after a break, along with her Dublin City Harriers clubmate, Laura Power. They finished in that order, with Gavin sprinting for the line to finish in a time of 14 mins 20 secs and Power ten seconds behind for the silver medal. In third place was Aisling Ahern of Raheny Shamrock AC in 14:36.

DCH with 24 points took team gold ahead of Clonliffe and Raheny Shamrock on 39 and 78 points respectively. A massive entry of around 150 saw runners of all ages lining out, many of them from clubs new to team competition.

An equally large entry had entered the men’s 6km race, and after the initial skirmishes, Raheny Shamrock club-mates Gavin Eccles and Daniel Stone were left to battle it out in front. In the end, Eccles took the title ahead of Stone, with Ben Guiden of Clonliffe Harriers finishing third. Raheny finished first team on 26 points, followed by Tallaght on 68 points. For third place Donore Harriers on 81 points held off the challenge of Clonliffe Harriers who finished on 84 points.

Thankful for races going ahead

With many public parks still closed for races, much thanks must go to South Dublin County Council for giving Dublin Athletics Board and the Sportsworld club permission to organise the races on a course previously used for the Dublin Intermediate Championships.

Next up on Sunday, October 17 is the Autumn Open and Dublin Juvenile Championships at Abbotstown; a test run for the European Cross-Country Championships due to be held at the venue on Sunday, December 12.

At the Meath Intermediate Championships in Navan, Edel Gaffney of Trim AC was a comfortable winner of the women’s race in 13 mins 59 secs. Her clubmate Cailin McDonagh finished second in 14:27, with Claire Ni Fhaircheallaigh of Dunboyne AC third in 14:35. Trim AC took team gold ahead of Dunboyne AC and Na Fianna AC.

Making it a Trim AC double in the men’s race was Ronan Moore, who won the race in 26:38. Tom Feeley, also Trim, was second and, with five finishers in the top seven, Trim took the team award. Taking individual bronze was Adam Canning of Rathkenny AC, while Dunboyne AC was second team ahead of Bohermeen AC.

Rising star Liam Harris of Togher AC ran away with the men’s race finishing in a time of 27:28. A distant second was James Hayes of Cork TC in 29:12, with Ian Tivy of Togher AC third in 29:42. Togher proved best of the teams, with St Finbarr’s second and Cork Track Club third.

Catriona Farrell won women’s race in 16 mins 15 secs with Sophie Morley of Emerald AC a close second in 16:19 and Tanya Cox of Dooneen AC third in 16:234. Dooneen with three in the top six was top team ahead of West Limerick AC. Niall Shanahan was first of the men in 26:44, followed by Declan Moore of Bilboa AC in 26:58.

Saturday on the roads

At the Donadea 10km, in Donadea Forest Park, Co Kildare on Saturday (October 9) , Stephen Conroy of Celbridge AC in 33 mins 39 secs and Laura McDonnell of Rathfarnham WSAF AC in 36:47 were the winners.

Winners of the Wicklow Hospice Half Marathon on the hills around Avondale House park in Rathdrum, Co Wicklow, were Bryan O’Connor in 76:21 and Zoe Greene 91:04. In the marathon, Shane Warner was first home in 2:59.17 and Anne-Marie Manning first woman in 3:57.24. McCormack, of Ableside AC, finished with a time of 39 mins 57 sec for the 3.229km race with 1000m climb. Winner was course record holder and mountain running legend Andrea Mayr of Austria in 35:42, followed by Francesca Ghelfi of Italy in 39:17.

Irish athletes on USA college scholarships had a busy day of it on Saturday (October 9). In Huntsville, Alabama, Shane Bracken of Swinford AC finished second of a field of 341 runners in the men’s 8km race at the UAH Invitational Cross-Country. Bracken, representing his Florida college Saint Leo, ran a good time of 23:51.44.

It was Bracken’s third top ten placing this season after his win at the season-opening Mountain Dew Invitational and his seventh place at the NCAA DII National Preview a week ago.

In Fort Hayes, Kansas Róisín Treacy of Dundrum South Dublin AC was 70th in 19:41.9 from a field of 170 in the women’s 5km the Fort Hayes State Tiger Open while at the New England Cross-Country Championships in Franklin Park, Sorcha McAllister of Westport AC finished 25th helping Boston College to team victory.

On this Monday we also have the likes of Stephen Scullion in action in the Boston Marathon.