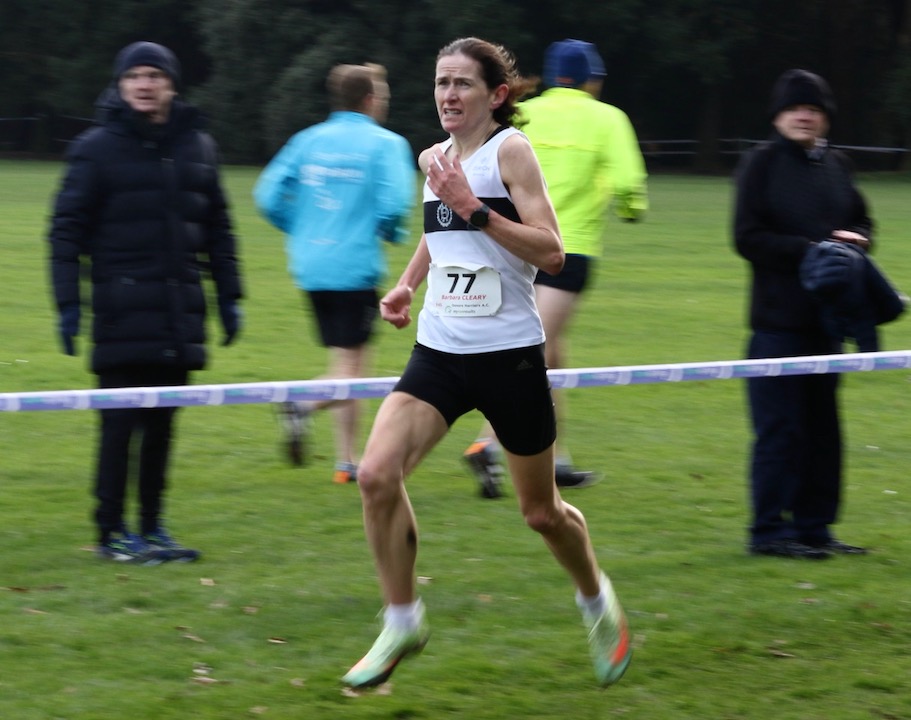 Lindie Naughton reports back from a busy weekend at Dublin Master’s Cross country, as well as action already heading indoors too.

Over 500 men and women lined out for the Dublin Master’s Cross-Country Championships held in St Anne’s Park, Raheny on a perfect winter’s Sunday afternoon (January 9). It was by some way the largest entry ever for this race.

First up were the women with Barbara Cleary of Donore Harriers taking the lead early on. While most athletes get slower as they age, Cleary, now aged 48, has gone in the opposite direction On the track last summer, Cleary ran times of 9:50.05 for 3000m and 16:43.62 for 10,000m — her fastest ever. Then in November, she won the women’s race at the North-South Masters’ Cross-Country Challenge in Belfast.

On Sunday, not even Olympian Maria McCambridge of Dundrum South Dublin AC, who’s two years younger than her, could keep with Cleary, who went on to win the race in 11 mins 32 secs. McCambridge, who is new to masters running, was second in 11:48. Third and first W35 was Ciara Durkan of Skerries AC, who has just moved into the masters ranks.

Best of the W50 teams was Raheny Shamrock followed by Clonliffe and Lucan Harriers. Raheny was the only club to field a full W65 team and duly took the honours in that grade. In the men’s 6km race, Mick Clohisey of Raheny Shamrock AC, running his first race as a master, pushed the pace from the start and by the end of the four-lap race, had not only built up a lead of over half a minute but had lapped much of the field.

Clohisey, who celebrates his 36th birthday next Thursday, finished in 20 mins 25 secs, with Tudor Moldovan of Clonliffe Harriers second in 21:00 and Ken Nugent of Donore Harriers third in 21:14. Unlike in the women race, the top seven men were all in the M35 age group.

Finishing eighth and first M40 was Karol Cronin of Sportsworld AC, with Ian Conroy of Raheny Shamrock, finishing just one place behind and second M40. In tenth place and first M50 was Shane O’Neill of Rathfarnham WSAF AC.

Winning the M65 race over a shorter three-laps was Tom Loftus of Raheny Shamrock; Loftus is a former winner of the Liffey Swim. A close second was Jack Tyrell of Tallaght AC, while third was Desie Shorten of Parnell AC. Team winners were Raheny followed by Civil Service and Clonliffe.

This was the first Dublin Masters Championships held since the sudden death of the Dublin Athletics Board chairman and Raheny Shamrock stalwart Pat Hooper. In his honour, his club had donated a perpetual trophy to go the club with the best overall performance on the day. With four wins, a fourth and a sixth, it was Pat’s own Raheny Shamrock squad that became the inaugural winners of the Cup.

An appropriate end to a brilliant days of athletics. Emerald Fencing battle to the line

The ESB Cross-Country Challenge, the only non-road event on the Cork BHAA calendar, got the year off to a good start with a fine turnout of 166 over an undulating 5km course at Beaumont Park also on Sunday (January 9) writes John Walshe.

Nick Hogan from UCC and Barry Twohig, representing Emerald Fencing, fought it out over the three laps and although Hogan was well clear with one circuit to go, Twohig fought back to reduce the margin to just four seconds at the line, winnign by 18 mins 51 secs to 18:55.

Alfie Davis, also UCC, took third in 19:04 with Tim O’Connor of Ervia finishing fourth in 19:17. Despite having two in the top four, UCC had to give best to Musgrave in the Grade A section on a score of 42 to 58. MTU (formerly Cork IT) were third on 80 points.

Niamh O’Sullivan has been to the fore for many years over the country, road and track and although now in the W55 age-group – a category she won last November at the Masters’ International in Belfast – she shows no sign of slowing down.

The Riocht athlete, here representing Tralee Physical Therapy, took first in a time of 21:36. Sinead O’Driscoll was only nine seconds in arrears but because she wasn’t registered second place went to Linda O’Connor (Musgrave) in 22:01.

Irene Eighan finished fourth in 22:25 and led her Novartis team to first in Grade A on a score of 93 points ahead of Musgrave on 129.

Interestingly, of the first ten men, eight were either in the M40 or M45 category while the first four women were also all masters – a trend that is all too common nowadays.

Middle distance race of the day at the opening round of the AI Indoor League in Abbotstown on Sunday wons was the men’s 800m, where Oisin Gallen of Finn Valley AC just edged out Aaron Mangan of Tullamore Harriers to win in 1:56.84. Mangan was given a time of 1:56.86.

Fastest by some way of the women was Leevale master Annette Quaid with a time of 2:13.44.

Newly-crowned Dublin Masters cross-country chmapion Mick Clohisey of Raheny Shamrock had warmed up for the race by running the Ferrycarrig 5-mile in Co Wexford on the previous Monday (January 3).

On the final day of 2021, Olympic athlete Ciara Mageean of City of Lisburn AC finished second overall in a women’s course record time of time of 26 mins 7 secs at the Lough 5 at Loughmacrory, Co Tyrone. Race winner was Andrew Annett, of Mourne Runners in a time of 25.02.

A close third overall and second of the men was Mageean’s partner (and pacemaker) Thomas Moran of Dunshaughlin AC in 26:09. Natasha Adams of Letterkenny AC held off a strong challenge from Catherine Whoriskey of City of Derry Spartans, to finish second woman in 28.16.