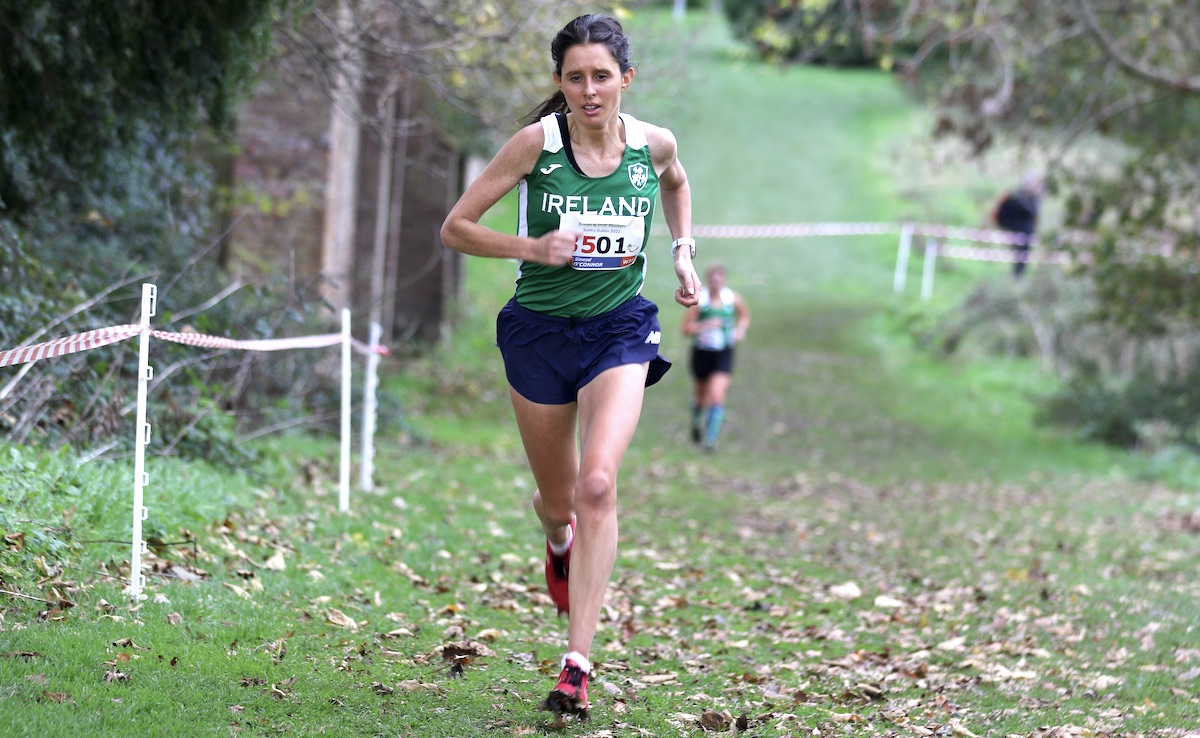 It started creeping into the calendar and now the cross country season really is upon us. Lindie Naughton from a successful day in Dublin.

A small piece of athletics history was made on Saturday (November 12), when for the very first time, Ireland was the overall winner of the British and Irish Masters’ Cross-Country International, held in perfect conditions at Santry Demesne, Dublin.

Five nations compete in the competition – England, Scotland, Wales, Ireland and Northern Ireland, and for thirty-two of the thirty-three years since 1988 when it was first held, England has come out on top.

Ireland had come close to winning in the past, notably in 2005 and 2010, when Santry was also the venue. Ireland has also had a number of individual winners down the years, usually in the W35 category.

Two of those winners – Niamh O’Sullivan, who was overall winner from 2004 to 2006, and Annette Kealy, overall winner in 2015, were again winners on Saturday; O’Sullivan in the W60 category and Kealy first W50. Kealy had also won in this category pre-lockdown in 2019. Pre-race favourite for the overall title this time was new ‘master’, Sinead O’Connor, who had not only won the Irish trial with ease but also taken the Irish 10km title earlier in the season.

O’Connor, from the Leevale club in Cork, duly proved the forecasters right by pulling away from the pack midway through the first lap of the 6km race for an emphatic victory. It was an eleventh individual title for Ireland in this age group. O’Connor also led Ireland to team victory, backed up by Fiona Santry, who was second, and Laura O’Donnell fifth W35.

Winning the W45 race and leading her team to victory was Natasha Adams, while first W70 was Eileen Kenny, just ahead of her team mate Margaret Glavey which, with Mary Lynch in fourth place, ensured another team victory for Ireland. In the W65 age group, Pauline Moran was taking a third win, having won twice at W60 level. Battles in the M35-45 categories

A surprise winner of the men’s M50 race, also over 8km, was Shane O’Neill who held his fire until the later stages for a dramatic victory.

Finishing second in the M65 race was many times world masters track champion Joe Gough, who was helping his team to a vital win.

Overall, Ireland won the W35, W45,W50,W70, M40,M45, and M65 team categories and also notched up a number of second places. It meant victory in both men and women’s categories and an overall win over England by 31 points to 36 points.

Roll on next year in Glasgow!

UCD, calling on some of the country’s best young middle distance athletes, won both men and women’s races for a second year at the Irish Universities Road Relays held at NUI Maynooth on Friday (November 11).

First up were the women with a team of four completing the 1 mile, 2 miles, 2 miles, 1 mile distance in 33 mins 10 secs. Lucy Barrett had given UCD ‘A’ a narrow lead after the first mile, and Irish international 1500m runner Sarah Healy extended that lead on the first of the two mile legs. Danielle Donegan, on the second two mile, consolidated that lead leaving Kate Nurse to bring the team home on the final mile. DCU ‘A’ finished second in 34:47 and UCD ‘B’ third in 35.30.

In the men’s race for teams of five, Luke McCann got UCD ‘A’ off to the best possible start with a time of 4:53 for the opening one mile leg.

This however was a much closer race. Jack Moran held his own on the first two mile leg before Darragh McElhinney set off on the three mile leg, completing it in the day’s fastest time of 13:57. On the second two mile leg. Aaron Getty was hard pressed by Sean McGinley of DCU, but held on to hand over to Peter Kilgannon for the final mile. On the roads in Munster

Boasting one of the biggest prize funds for a road race in Cork – including €250 for the male and female winners – the Eyeries five-miler on Saturday (November 12) brought this year’s four-race Beara AC Autumn Series to a close, writes John Walshe.

Olympic marathon runner an Aoife Cooke of Eagle AC demolished what was already an impressive course record of 29:59 set by Hannah Steeds last year when finishing a brilliant fourth overall in a time of 28:42. The venue, situated on the Wild Atlantic Way, certainly lived up to its name as a blustery wind added to the already difficult undulating course.

Second to Eagle athlete Cooke in 32:39 was Rosaleen MacKeown of Leevale AC with Rachel Hawker from Kenmare AC third in 33:53.

A see-saw battle between Donal Coakley of Leevale and Anthony Mannix from the Cork Track Club saw Coakley using his downhill skills to advantage as he moved away over the last mile to win by exactly half-a-minute in a fine 26:59. Third was unattached runner Nick Hogan in 28:32.

Although Coakley hadn’t run all races in the Series, his wife Rhona Dempsey had so she was crowned overall champion with Patrick McCarthy the winner of the men’s section.

Elsewhere in Cork, John Meade of St Finbarr’s AC won the Thomas Kent Memorial 10km at Castlelyons for the third time. His 33:42 in wet and windy conditions gave him over a minute to spare from Kieran McKeown of Grange-Fermoy AC who recorded 34:45 with Paul Cashman of Watergrasshill AC third in 35:19.

First three in the women’s race were Leevale AC’s Carol Finn in 38:22, Linda O’Sullivan of Watergrasshill AC 39:07 and Margaret Murphy from Mallow AC 39:08.

The Brickey 5km outside Dungarvan returned after a three-year break with victory going to Niall Sheil of St Killian’s AC in 16:52 with West Waterford AC’s ultra-runner Raivis Zakis second in 17:01 and Paul Spiteri of Midleton AC third in 18:24.

International race walker Kate Veale showed no after-effects of her second place the day before at the Kilmeaden ‘Beat the Train’ 10-mile when easily finishing first woman in 19:22. Vicki Spiteri went one better than her husband to take second in 19:56 with Jackie Carthy of Kilmore AC third in 20:33.

At the Stook 10-Mile in Dungarvan, Co Kilkenny, Darragh Buckley of St Senan’sAC won the 10-mile in 61:15; the ageless Angela McCann of Clonmel AC was first woman and first W50 in 66:44.

Sli Cualann AC made it a double at the Polish Independence Run 10km, in St Anne’s Park, Dublin, also on Sunday, where Alan Dalton in 35:38 and Catherine O’Connor in 38:08 were the winners. First Polish runner was Pawel Kaim, fifth in 38:54.

A clear winner of the Northern Ireland 50km Championships in Craigavon on Saturday (November 12) was Michael Kerr with a time of 3 hrs 34 mins 9 secs. Rex Brilliantes was second in 3:44.50 and Karen Wilton from Jog Lisburn third and first woman in 4:18.42.

With the European Cross-Country Championships in Turin Italy taking place in less than a month’s time and the team to be selected after next Sunday’s National Championships in Donegal, there were a few eye-catching runs by Irish athletes in NCAA Division 1 regional races last Friday (November 11), with the men running 10km and the women 6km.

Brian Fay of Raheny Shamrock AC won the men’s race in the West division, hosted by the University of Washington, with a time of 28:17.2. In the women’s race, Sophie O’Sullivan of Ballimore Cobh AC was showing a welcome return to form when finishing ninth place in 19:34.3.

Another winner was Barry Keane of Waterford AC who was running in the Great Lakes Regional, held in Warrenville, Illinois. His time was 29:38.01

In Columbia, Missouri, at the Midwest qualifier, Shay McEvoy of Kilkenny City Harriers finished third in 29:42. Cormac Dalton of Mullingar Harriers was a close fourth in 29:42 and Michael Power of West Waterford AC sixth in 29:42.8.

Charlie O’Donovan of Leevale AC finished eighth in the Mid-Atlantic regional, hosted by Penn State, in 30:12.

Fearghal Curtin of Youghal AC was competing in the South Region at Huntsville Alabama, where he finished sixth in a 19:30. Shane Bracken of Swinford AC was 32nd in 30:42.9 and Louis O’Loughlin of Donore Harriers 42nd in 39:59.6.

In the Mountain Regional in Albuquerque, New Mexico, Kevin Mulcaire finished 42nd in 29:04.8.

The NCAA Cross-Country will take place at Oklahoma State University, in Stillwater, Oklahoma on Saturday, November 19.