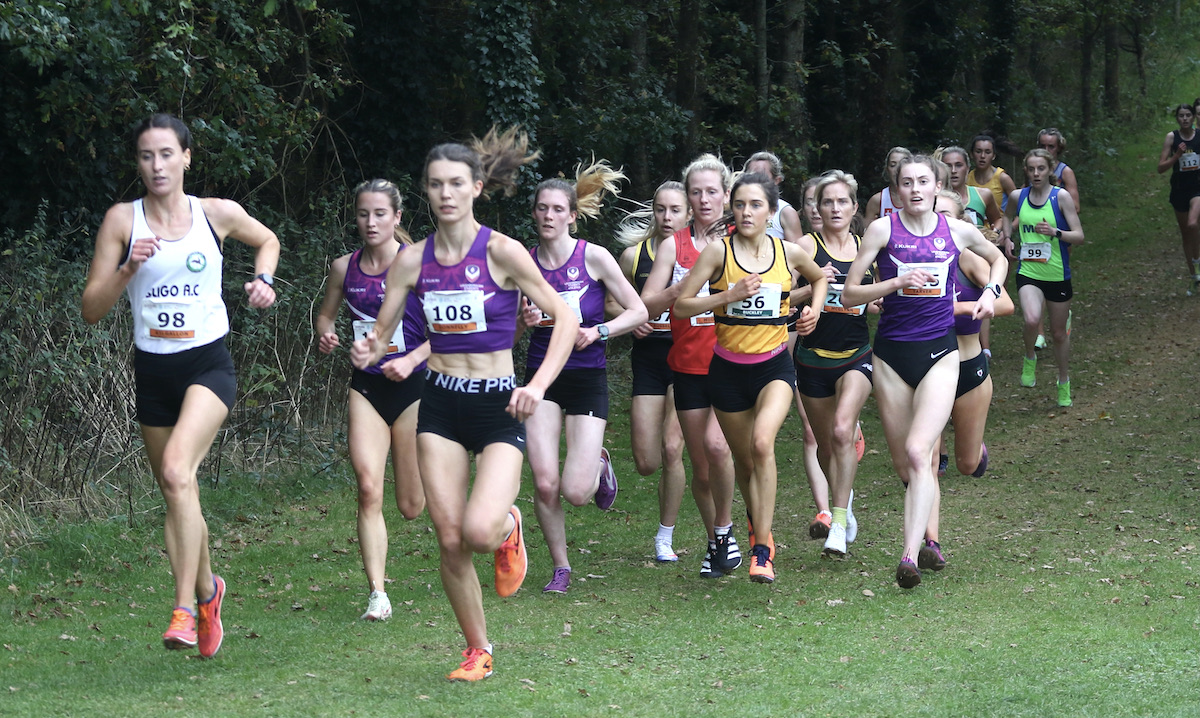 Cross country and ultra-running was on the agenda this weekend with a new Irish record over 24hrs set in Belfast. Lindie Naughton reports.

A determined effort by 20-year- old Darragh McElhinney of UCD AC saw him winning the men’s 7.5km at the Autumn Open Cross-Country held in Abbottstown, near Dublin, on Sunday (October 17).

McElhinney was part of a group of five that had broken away early, but with a lap to go, he was pulling away with only British visitor Tom Mortimer staying with him. With the line in sight, he sprinted clear for victory. Top junior was Nicholas Griggs of Mid-Ulster AC, who only a few months ago, won the 3000m title at the Euroepan U20 Championships. Scott Fagan from Metro St Brigid’s AC finished second and Aaron Smith of Cillies AC.

With places at stake on the Irish team for the match with Northern Ireland next month, master athletes were out in force and showing impressive form. First M35 was Tim O’Donoghue of East Cork AC who finished sixth overall, followed closely by two Irish marathon champions – Sergiu Ciobanu of Clonliffe Harriers and Paul Pollock of Annadale Striders, who presumably will lead the Northern Irish team next month.

British visitors dominated the women’s race with the 2019 race winner Abbie Donnelly drawing away for a solid victory, followed by Kirsty Walker third and Alex Millard fifth. Breaking them up were the ageless Annmarie Glynn of Letterkenny AC, a fighting second place and first W40, and Mary Mulhare of Portlaoise who pulled through to finish fourth.

The course, built around 1.5km and 2km laps, will be used for the European Cross-Country Championships on December 12. Ed McGroarty of Lifford Strabane AC not only won the Belfast 24-Hour International in Victoria Park at the weekend (October 16-17) but smashed the Irish record when he clocked up a massive total of 256.57km (159.42 miles) despite the cold, wet conditions.

McGroarty, the form man in Irish ultra running, was beating Tom Maguire’s long-established outside record of 248.392km set in 2009, after breaking the overall Irish record in Espoo, Finland last February with 249.761km.

It was a second Irish record for the Donegal man this year. Last July, he took just three days two hours and 53 minutes to run the length of Ireland from Mizen to Malin, breaking Eoin Keith’s record of three days three hours and 47 minutes set in 2017.

Finishing just one place ahead of Mundow was seasoned campaigner Eddie Gallen, now aged 58, with a total of 215.72km (134.04). Gallen, originally from Donegal, has lived in Spain for many years, but rarely misses an ultra race in his native land. The women’s podium at Belfast 24hr with Aoife Mundow in the centre.

Veteran athlete Conor Murphy of Kenmare Ac was the winner of the Bere Island 5-Mile on Saturday (October 16).
Murphy’s time of 32 mins 23 secs gave him a twenty second advantage over second placed Patrick McCarthy who was also first M50. First woman and sixth overall was local athlete Deirdre O’Sullivan of Beara AC in 35:10. Just over a minute behind for second place in 36:16 was Clare O’Shea.

At the East Mayo Half Marathon, in Charlestown, Co Mayo, on Saturday (October 16) Enda Marren was the winner in 75 mins 9 secs, with Roisin Golden Golden first woman in 93:40.

A day later, Kevin Donagher of Rathfarnham WSAF AC was the winner of the Northeast Galway 10km, in Moylough with a time of 32 mins 45 secs. Second in 33:44 was Hugh McArdle of Roscommon Harriers who was also first M40. First woman and first W40 was Yvonne Fehily in 42:50.

A large number of Irish athletes were using the Nuttycombe Invitational cross-country, at Madison Wisconsin on Friday (October 15) as part of their preparations for the forthcoming championships season, which starts at the end of October.

In the B race: Sophie O’Sullivan of Ballymore Cobh, making a retrung to racing after injury, finished 14th.

In her debut marathon, Sorcha Nic Dhomhnaill of Donore Harriers came third woman in the Manchester marathon on Sunday October 10 with a time of 2 hrs 46 mins 24 sexcs. Her older sister Aislinn was fourth and first W40 in 2:48.21.