Commonwealth Games and London marathoners out in force 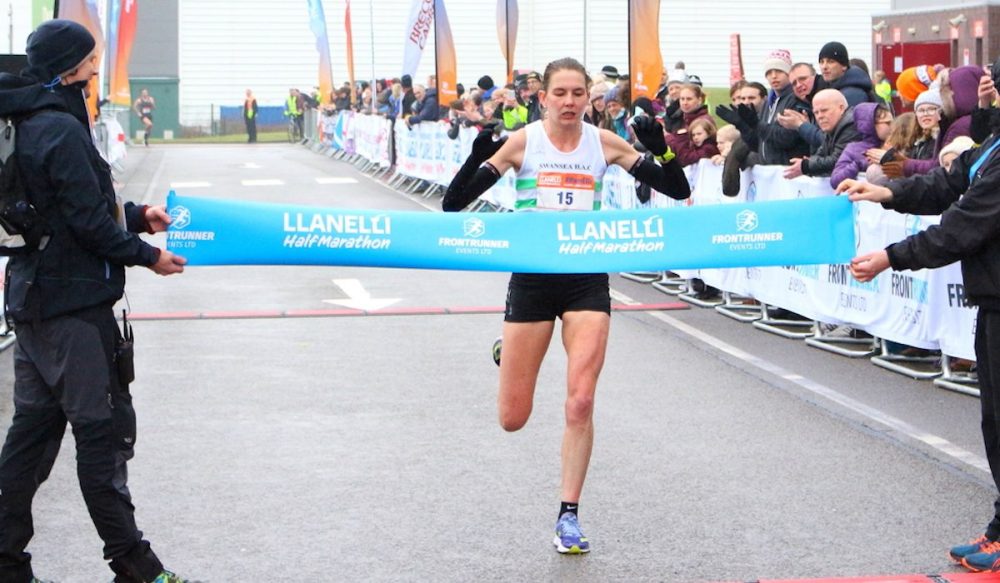 With Commonwealth Games and London marathons on the horizon, Caryl Jones, Robbie Simpson and Charlotte Purdue all raced over the weekend.

Elsewhere, at British Indoor Championships, Laura Muir and Jake Wightman’s won British titles on the first day, with Eilish McColgan and Andrew Heyes bringing the curtain down on the two-day competition.

A report from Saturday’s can be found here and Sunday’s action in Birmingham here.

Welsh marathoner Caryl Jones continued the preparations for the Commonwealth Games winning the women’s crown at the Llanelli Half Marathon on Sunday.

The Swansea Harrier runner crossed the line in 74.26 adding to her win at the Telford 10k in January.

“I’m really pleased with the race. I was given a task by my coach and I executed it really well, so I’m happy with that,” said Jones afterwards. “I’ve just done a 100-mile week, so it was just a training run really, although a hard one, obviously.”

Matt Clowes overcame blustery coastal conditions and a strong field to run away with the men’s race. The Cardiff AAC runner won in 65.14 ahead of Andy Davies in 67.42. Like Jones, Stockport Harrier Davies will be heading to Australia’s Gold Coast in April.

In Scotland, Robbie Simpson, part of the Scottish Commonwealth Games marathon team, won the Kinross to Lossiemouth Half Marathon. Simpson crossed the line in 67:13, with Alison Matthews the first women home in 84:53.

Charlotte Purdue continued her preparations for London Marathon in Australia finishing second in the Bank of Us Run the Bridge 10k. Purdue crossed the line in 33:41 behind fellow Olympic marathoner, Australian Lisa Weightman in 32:41.

In the men’s race, Australia based Nick Earl from Norfolk finished fifth in 29:47.

At the Hendy Tunbridge Wells Half Marathon on Sunday, Simon Goldsworthy and Maria Heslop won the titles. The Guildford & Godalming runner was the first across the line in 71:21, with Tonbridge’s Heslop winning a fourth women’s title in 82:25.

Over the BUCS Indoor Championships weekend in Sheffield. The St. Mary’s runner won in 9:23.73 with Loughborough duo Hannah Nuttall second in 9:25.53 and Jo Hickmann Dunne third in 9:27.90.

Mahamed Mahamed won the men’s 3000m race in a personal best 8:18.93. Southampton Solent’s Mahamed, who finished 10th at the Armagh 5k last week, won by less than half a second ahead of St. Mary’s Surafel with James McMurray just pipped on the line for second.

Huddersfield Uni’s Ossama Meslek got the better of Dominic Brown to win the men’s 1500m in 3:54.56, while Birmingham’s Lydia Hallam was crowned the women’s champion winning in 4:29.82.