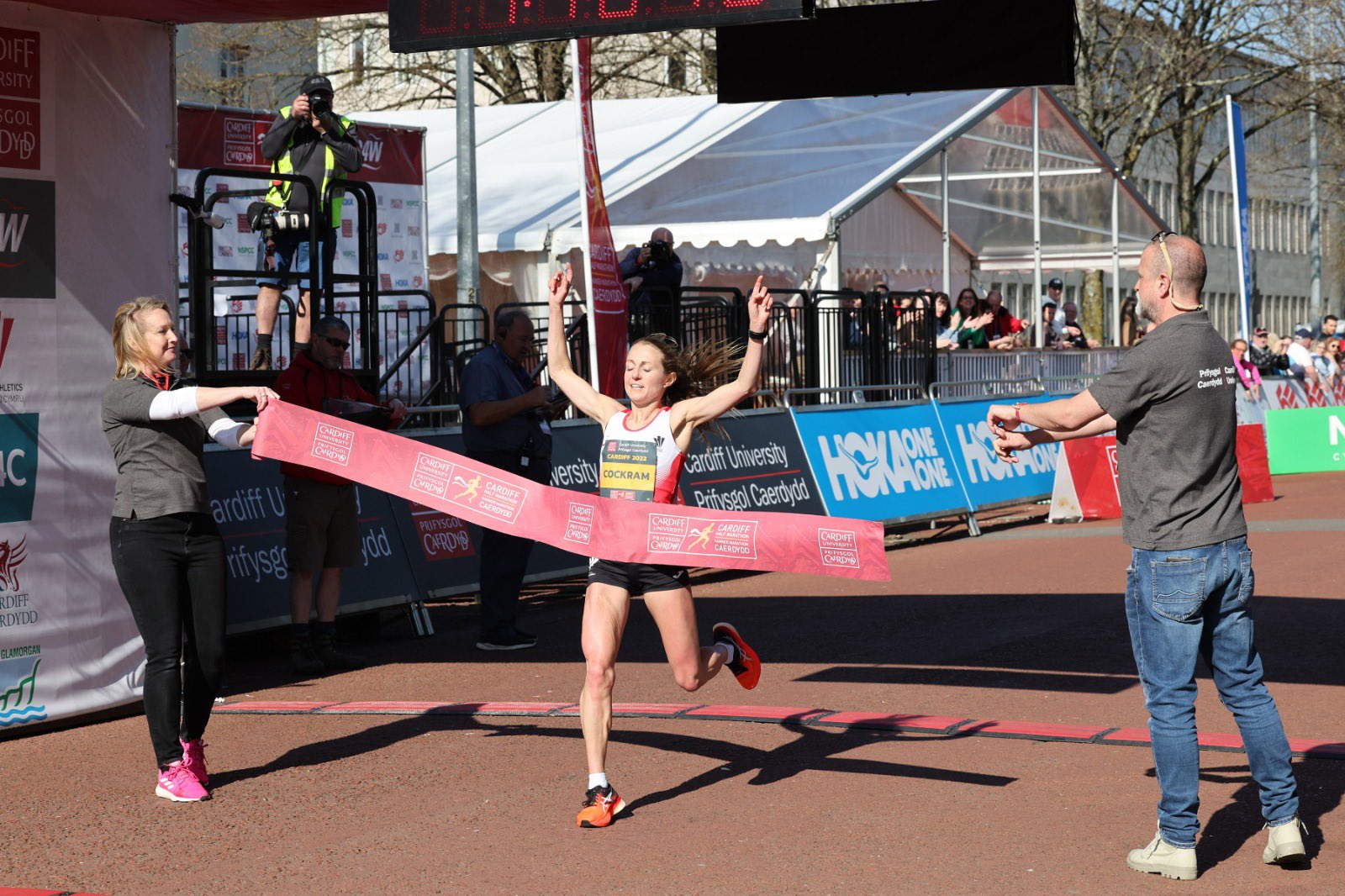 There are massive PBs and top class debuts in Cardiff Half and Relays see club rivalries move from cross country to the roads.

A high quality field had the FastRunning team watching the tracker for the Cardiff Half Marathon on Sunday morning. Natasha Cockram was a favourite going into the race and heck did she show us why – she led the whole way and took massive two minutes off her previous best (set at the Big Half in 2021), resulting in a convincing win of 70:47.

Llongfarchiadau, @cockram_natasha, who takes 1st in the women’s elite race!

She completes the @cardiffuni Cardiff Half in an impressive 1:10:47 🏆 pic.twitter.com/ktwub17t0Y

Runner up was Bronwen Owen who ran a brilliant debut at the distance, finishing in 74:04. Third place went to Elle Twentyman, who also set a chunky PB of 74:58. Hannah Viner also set her first mark for a half marathon, 75:31 for fourth, and Julie Osbourne was fifth 76:04.

In the run-up to the men’s race there was plenty of chat about the double-debut from the Mahamed brothers, but it was Kadar Omar who took the lead by 20k and held on for the win. Holding a previous best of 66:06, his time of 62:46 was a substantial upgrade.

Behind him, the battle of the brothers resulted in Mahamed Mahamed clocking 62:52 to take bragging rights ahead of Zakariya’s 64:05. Jonathan Glen was fourth in 65:51 and James Hunt fifth in 66:06.

Recent history repeated itself this weekend at the TruWealth scottishathletics 6/4 Stage Road Relays in Livingston. Echoing the results of the National XC at Falkirk three weeks ago, Central AC and Edinburgh Hare and Hounds took gold in the men’s and women’s races.

Central AC’s time of 2:31:41 is the fourth fastest at this venue, and on a longer course than a couple of those previous times. The squad was made up of Tom Graham-Marr, Alastair Marshall, Ben MacMillan, Hamish Hickey, Alistair Hay and Jamie Crowe.

The winning women’s team was Hannah Anderson, Rebecca Johnson, Grace Pow and Holly Page. They finished in a combined time of 1:46:39. Looking at the fastest overall on the long and short legs, all the gongs belong to Central AC, Fastest on the short were Tom Graham-Marr (15:04) and Morag Millar (16:59). On the long it was Jamie Crowe (28:46) and clubmate Jennifer Wetton (34:35).

With cross country season over, road relays are now the battle ground for clubs around the country. The Midland Counties held their 12 and 6 Stage Road Relays at Sutton Coldfield.

First place in the men’s competition went to Notts AC in a combined time of 3:56:56. Full results and team lists here. Fastest of all long legs was Omar Ahmed for Birchfield in 25:30 and for short it was apparently Andrew Popplewell of Massey Ferg, but his time is not confirmed!

Coventry Godiva Harriers topped the women/s table in 2:16:50 with fastest long leg going to Katie Holt (City Of Stoke – 29:03) and it was brilliant to see Gemma Steel of Charnwood returning to racing to take the fastest short leg in 17:17.

Jess Judd (Blackburn) ran the fastest long leg by over a minute in 25:25 with Sophie Tarver (Wirral) and Lauren Heyes (Hallamshire) running the fastest short leg in both clocking 12:38.

The Southern Counties venue was Milton Keynes and results are yet to be released . Highgate took the men’s victory with a famous win for Cambridge Harriers for the women. Full results to be added when we have them.

A Week on the Roads

In the York 5k edition, the women ramped it up a notch with the top three all finishing in under 18 minutes. Josie Rawes (York Knavesmire Harriers) was fastest in 17:18, chased home by Ruby Sykes (Holmfirth Harriers) in 17:33 and Jasmine Wood (Hillingdon AC) in 17:43.

Round the much-used training ground that is Battersea Park the Sri Chinmoy 10K saw Lawrence Hollom of Thames Hare and Hounds win in 32:08, holding off MacGregor Cox who came home in 32:20 and George Suthon in 32:29. Lauren Longhurst of Mornington Chasers took the top spot for the women in 39:13 with Angharad Daniel second in 40:53 and Christine Lutsch third in 40:58

A race on my list to run one day is the Coniston 14 which covers a beautiful route around Coniston water in the lake district. Kay Neesam ran the fourteen fastest for the women in 1:34:06 followed by Lynn Birchall in 1:39:29 and Heather Hughes in 1:39:45. In the men’s race it was Grant Johnson who led the charge home in 75:50, a clear win over Ian Holmes 79:29 and Marc Sennet 79:29.

Top of the podium at the Liverpool Half Marathon was Ben Taylor in 70:39. James Wooton ran 71:53 for second and Adam Smyth took the final medal position in 72:08. Cerriet Tezgel was first woman home in 1:46:51. The Liverpool 10 Mile went to Stephen Campbell in 52:22, one minute ahead of Chris Pownell and Sean Jones in 54:55. Emily Gray was first in the women’s race, crossing the line in 65:04.

And now for something a little different – the first ever World’s Steepest Street Run took place Harlech this weekend (there is a steeper street in New Zealand but they don’t have a race..yet). The 6k run with a 37.45% maximum gradient up Ffordd Pen Llech did not deter Rhys Jones (23:56 / 2:22 for the climb) and Sophie Pilkington ( 27:09 / 2:40 for the climb) who were the inaugural winners.

It was great to be back in Harlech, and to see you all challenge yourselves on this unique run. 💪

For the full results, head over results page 👉 https://t.co/pZIAarRkYK pic.twitter.com/zyx91M6Jkp