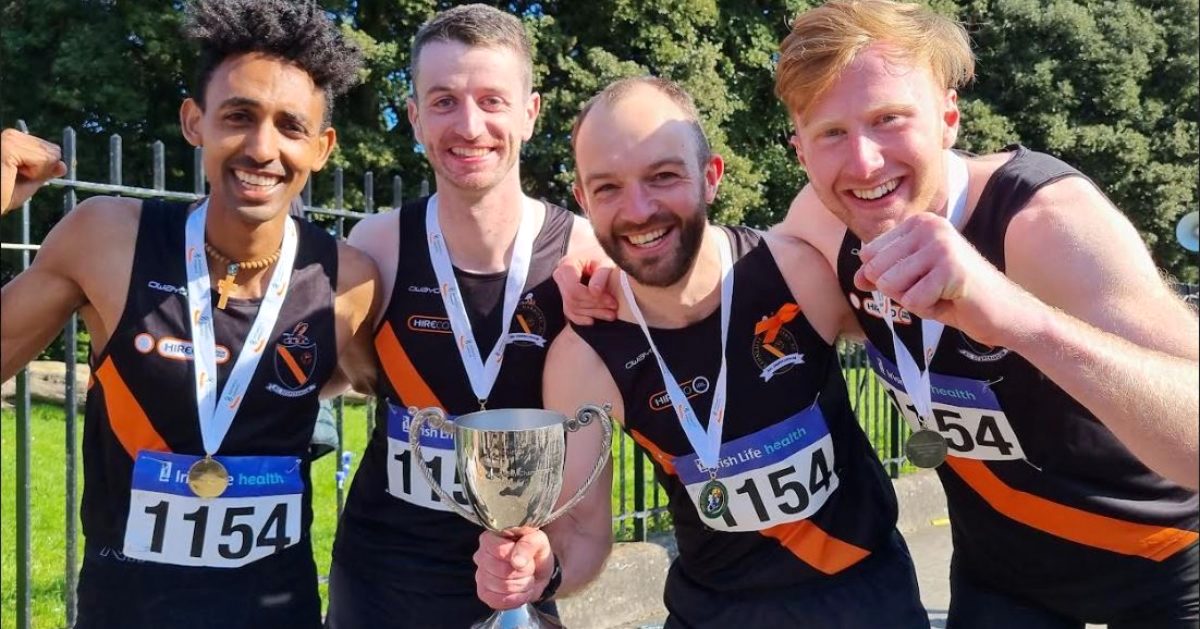 Lindie Naughton reports back on a packed weekend of Irish endurance action including great racing at the National Road Relays.

In an enthralling race, dominated by UCD AC early on, Guiden caught UCD’s Luke McCann on the final two mile leg with his blistering time of 9 mins 4 secs giving Clonliffe a 28 second lead over the students at the finish. Previous winners Ennis TC were a fighting third.

UCD had better fortune in the women’s race when the club’s A team, with Tokyo Olympian Sarah Healy on the two mile leg, took the women’s title. Kate Nurse ran the first mile for UCD with Healy passing on to Ellie Hartnett for the final one mile leg.

There was more glory for the UCD women when Danielle Donegan, Fiona McKenna and Alanna Lally just edged out Clonliffe Harriers for the bronze medals.

Dominating the M35 race from the start was the East Cork AC trio of Stephn O’Brien, James McCarthy and Kevin O’Brien, with Bros Pearse second and Clonliffe Harriers third. Inishown AC, with a team including Pauric McKienny, won the M50 title from Donore Harriers and Metro St Brigid’s AC.

Armstrong proved the class of the field coming home over three minutes ahead of the chasers in 2 hrs 14 mins 2 secs – a time which qualifies him for the European Championships.

Making it an Irish double in the half marathon were Jake O’Regan of St John’s AC and Fionnuala Ross of Armagh AC, who is based in Scotland.

O’Regan, who was second in the recent Dunboyne 10km and ran 64:52 in the Bohermeen half marathon last month finished just outside that time in 64:58. In a close-run women’s race, Ross came out on top in 74:18. On a good day for the Irish, Catherine Whoriskey of City of Derry Spartans finished third and first W35 in 76:11

Sean Hehir of Metro St Brigid’s AC was the winner of the 10km at the Wexford Half Marathon and 10km – one of a number of road races held on Sunday (April 24).

Hehir’s time of 32 mins 53 secs saw him finish comfortably clear of the chasers. First woman was Audrey Gahan of Donore Harriers in 44:09. David Gahan of Slaney Olympic AC in 71 mins 43 secs and Lucy O’Malley in 86:15 were the winners of the half marathon.

In Ashbourne , Co Meath, Paul Smith of Drogheda and District AC was a comfortable winner of the St Andrew’s 5km in 15:59. First woman in 20:55 was Saoirse McGrath.

Mick Fogarty of Ferbane AC was the winner of the Banagher 5km in 15:21, with junior athlete Luke Purcell of Nenagh Olympic second in 15:34 and Emily Grennan of Tullamore Harriers first woman in 17:29.

Peter Arthur of Liffey Valley AC in 16:22 and Riona Ni Mhuireartaigh of St Abban’s AC in 20:27 were the winners at the Ballon NS 5km.

Connemarathon with the big numbers

Biggest numbers of the lot turned out for the 19th annual Connemarathon where there were races over three distances – half marathon, marathon and ultra on a scenic and demanding route around Connemara.

Winners of the ultra marathon were Stu Rawlinson of Wanderers AC in 4:23.49 and Sandra McKeever of Foyle Valley AC in 5:16.16.

A day earlier, Mary Kenny in 79:53 and former international mountain runner Edel Mooney in 88:19 were the winners of the Royal Canal Run Half Marathon. Winners of the 10km were Barry Sheil in 33:56 and Fiona Gettings in 39:37.

In Donegal on Friday evening (April 22), Danny Mooney and Nakita Burke made it a Letterkenny AC double at the Hugh Gallagher Memorial 5km in Milford.

A day later, Natasha Adams finished second overall at the Streets of Ballyshannon 5km in 16 mins 34 secs. The only athlete to beat her was Ballymore Cobh’s AC’s Trevor Cummins whose time was 16:16.

On Thursday evening, Cork road racing returned with a bang at the Ballintotis 4-Mile after a two-year absence with over 800 runners taking to the scenic course just off of the N25 outside Midleton, writes John Walshe.

Paul Moloney from Mallow AC, along with Tim O’Donoghue of East Cork and Niall Shanahan from An Bru in Limerick, were well in contention at halfway, however, after hitting the main road with around 1,000m to go, Harty made his move crossing the line in a time of 19:18, just three seconds outside the record.

Tim O’Donoghue was next in 19:28 with Shanahan third in 19:31. When Lizzie Lee ran her course record 21:21 in 2016 it was the start of a momentous year that culminated at the Olympic Marathon in Rio. This year, her target is nearer to home as she is aiming for the Cork Marathon around the streets of her native city on June 5.

Despite a 20-mile run the previous Sunday, the Leevale athlete still had enough speed in her legs to clock a fine time of 22:20, over a minute-and-a-half ahead of runner-up, Linda O’Sullivan from Watergrasshill AC. Third was Breda Gaffney from Mallow AC with fourth spot going to Jen Preston who has strong local connections although now back running with Liffey Valley AC in Dublin.

Leevale’s Charlie O’Donovan, running for Villanova, finished third in the men’s 1500m at the Virginia Challenge in Charlottesville on Friday. O’Donovan’s time was 3:41.84. In the same race, Sean Donoghue of Celtic DCH was tenth in 3:42.45 and Shane Bracken of Swinford AC 16th in 3:43.19.

At the Leinster Evening League opening round of the season at Belmont and Little Sugar Loaf on Wednesday (April 20), Conor Greenan of TT Racers was the winner in 20 mins 36 secs, with Becky Quinn first woman in 45:47. Distance was 8.6km with 360m of climb.

The league continues on Wednesday evenings until August 3, with the next round at the Scalp (6.35m, 217m climb). See www.imra.ie