Cleary a class above – Irish round-up 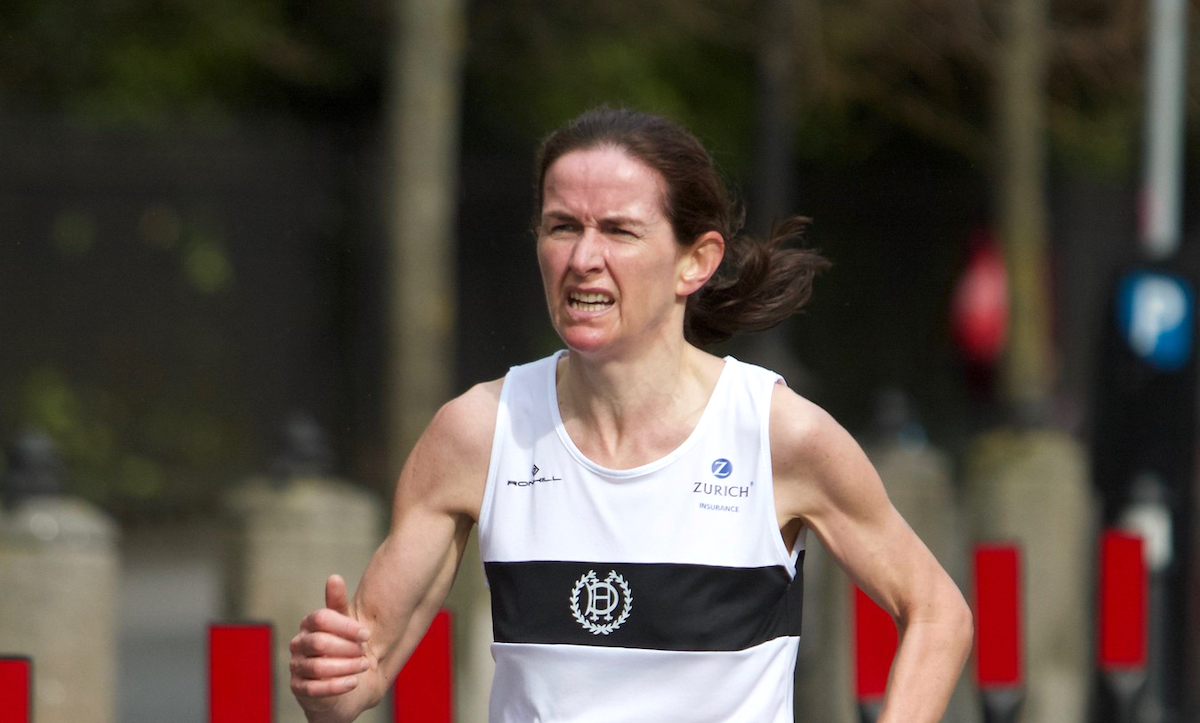 Barbara Cleary of Donore Harriers was the overall winner of the women’s race at the North South Masters’ Cross-Country Challenge, held at the Queen’s Playing Fields in Belfast on Saturday (November 13)

Cleary, who is 48 years young, was beating athletes ten and more years younger than her. She was chased hard by Claire McGuigan who finished just three seconds adrift for second place and was first W35. In third place and first W40 was Sarah Jane Cooke of Victoria Park and Connswater AC who was also the first Northern Irish athlete.

Other impressive runs came from former British and Irish champion, Niamh O’Sullivan of An Riocht AC in Co Kerry, who was first W55 in a time that would have won the W50 category. Former mountain runing international Majella Diskin, also based in Kerry, was first W65, while first in the W75 class was Brigid Quinn representing Northern Ireland.

In the older age groups, who ran a shorter distance, Paul Elliott of Beechmount Harriers was first M65, just edging out his team mate, Gerry Doherty.

The race replaced the annual British and Irish Masters Cross-Country International, first due to be held in Santry in November 2020. It was moved forward to this year because of ongoing lockdowns and then cancelled entirely when a venue could not be found for the traditional post-race party and celebrations. Saturday’s race went some way towards replacing it – and may even be worth repeating!

Not all Irish master athletes were in Belfast though

A clear winner of the women’s race at the Cork Masters cross-country title in Riverstick on Sunday (November 15) was Martina Kiely of St Finbarr’s AC. Leevale’s Annette Quaid, better known as a track athlete, was second and Lorraine Bolster of Mallow AC third. Winning the novice title, run in conjunction with the masters, was Norah O’Brien of East Cork AC who was seventh overall.

Abroad, Olympic steeplechaser Michelle Finn of Leevale AC warmed up for next weekend’s National Cross-Country Championships by travelling to Spain for the Cross International Atapuerca in Burgos on Sunday (November 14).

Finn battled hard throughout and finished 16th in a time of 26 mins 48 secs for the 8km distance. Race winner was 20-year-old Rahel Ghebreneyohannes of Eritrea in 25:03.

First woman in 16:43 was Ciara Hickey of Brothers Pearse AC, who was also first W40. Laura McDonnell was second in 17:38 and Maria McCambridge of DSD AC third in 17:53.

In Castlelyons, Co Cork, Leevale AC’s Conor McCauley was the winner of the Thomas Kent Memorial 10k in a time of 33 mins 1 sec. Pat Hennessy of West Waterford AC was second in 33:10 and Andrew Sheehan of Clonakilty AC third in 33:49.

David Mahon of Slaney Olympic AC was the winner of the Stook 10-Mile in Co Kilkenny with a time of 53 mins 53 secs. Michael Kelly of St Abban’s AC was second in 55:47 and Noel Murphy of Waterford AC third in 55:59.

Fourth and first woman in 59:45 was Courtney McGuire of Clonmel AC. Angela McCann, also Clonmel AC, was second woman and seventh overall in 62:35 and also first athlete over 50, male or female. Second over 50 was McCann’s Clonmel clubmate Conor Fleming in 62:42. Third woman was Grainne Brennan in 69:14.

Dymphna Ryan of Dundrum AC joined the growing club of overall women winners with victory in the 10km. Her time was 37 mins 37 secs. Second and first man in 38:22 was Sean Delaney.

At the Clane GAA 10km on Saturday (November 13), Martin Hoare was the winner of 31 mins 55 secs, with his Celbridge AC clubmate Stephen Conroy second in 32:53 and Aaron O’Donnell of Carrick-on-Suir AC a close third in 32:57.
Local athlete Carole Field of Clane AC was first woman and first W40 in 40:26.

Winners of the 5km were Ciaran Madden of Longford AC in 16:56 and Allison Duff of Newbridge AC who was second overall in 19:20.

Also on Saturday, Hannah Steeds of Clonmel AC, who had won the Eyeries 5-Mile a week earlier, added another victory to her collection when she finished first woman and ninth overall at the Killarney Half Marathon. Her time was 80 mins 41 secs. Overall winer of the race in 72:09 was Vivian Foley.

Gavin O’Rourke won the associated 10km by some distance in 31:29, with Ann McPhail first woman in 40:39.
Winners of the Lough Boora 10km in Co Offaly were Jimmy Coughlan of SMC in 34:58 and Jenny Algar of Mullingar Harriers in 39:56.

University College Dublin clocked up an historic double at the Irish Universities Road Relay Championships in NUI Maynooth on Saturday (November13) when winning both the men and women’s titles.

It was the first double for the college in the thirty-one year history of the relays. The women had last won in 2015 and the men in 2012.

First up were the women, with Meabh Brannigan of NUI Galway clocking the fastest time of 5 mins 16 for the opening mile leg, closely followed by Ciara Deely of the Dublin City University C team and then Kate Nurse for UCD. On the second leg of two miles, Danielle Donegan pulled UCD into the lead with Trinity College now moving into second place and DCU A third. Irish international athlete Sarah Healy took up the running on the second two-mile leg and her sensational time of 10 mins 17 secs saw UCD draw further ahead. In the battle for the minor placings, Jodie McCann for DCU A caught `Louise Deegan of Trinity and moving her team into second place. A determined team from University College Cork was a close fourth.

It was left to Róisín O’Reilly to bring UCD home, with her time of 5 mins 23 secs for the final mile led giving UCD a total at 32 mins 31 secs, and keeping them almost two minutes clear of the chasers. It was also the fastest winning time in seven years.

For second place, Shona O’Brien pulled into the silver medal position when clocked a time of a time of 5:16 for the final mile. It gave UCC a total time of 34 mins 25 secs. For third place DCU just held off Trinity by four scconds.

The mens race exciting too

Next up were the men with Mark Milner giving UCD the best possible start when he ran a time of 4 mins 57 for the opening mile leg. Just four seconds behind was Cillian Kirwan for UCC, while right on Kirwan’s heels was Gary Campbell for the DCU A team.

Conor Maguire kept up the pressure for UCD clocking 9 mins 23 secs for the second leg of two miles, with Jamie Battle pulling DCU into second place ahead of Callum Morgan from Queen’s.

Setting out on the three mile leg for UCD was Darragh McElhinney whose time of 14 mins 2 secs further stretched his team’s lead. Behind him, Andrew Coscoran kept DCU A in second place with a time of 14:40, while a strong run from Donal Devane put NUIG into third place ahead of the DCU B team, with Queen’s fading back to fifth.

UCD’s dominance up front continued with Cian McPhillips running a time of 9 mins 46 secs for the second two-mile leg. It meant that Peter Kilgallon took over for the final mile leg with a twenty-second lead over DCU A, despite the best efforts of DCU’s fourth leg runner Keelan Kilrehill who had clocked a time of 9 mins 25 secs for the two miles. Behind them both, the DCU B team was now in third place thanks to the efforts of Ben Guiden.

Barry Keane of Waterford AC produced the best Irish performance of the day at the nine rounds of the NCAA Division I regional cross-country championships all held on Friday (November 12).

In the Great Lakes Region Championships at Evansville, Indiana, Keane finished second behind his Butler team mate Simon Bedard. Finishing 42nd, also for Butler, was Evan Byrne of Togher AC. The team finished fifth. Both Butler teams will compete at the NCAA Championships next Saturday in Tallahassee, Florida..

In the South East Division Championships held in Louisville, Kentucky, Fearghal Curtin of Youghal AC, a senior at Charleston Southern University, finishing third and just twenty-one seconds behind the winner of the men’s race.

The Haggins Oaks Golf Complex in Sacramento, California hosted the West Region Championships, where Brian Fay of Raheny Shamrock AC finished sixth in the men’s race, helping the University of Washington to second place behind Stanford.

In the women’s race, the University of Washington also finished second with Sophie O’Sullivan in 70th place.
Irish athletes were out in force in the women’s race at the North East Region Championships in Franklin Park Boston, with Laura Mooney of Tullamore Harriers finishing seventh for Providence College. Just behind her in eighth place for Iona was Sophie Murphy of Dundrum South Dublin AC. For Providence, Orla O’Connor of Waterford AC was 48th and Alex O’Neill of Ennis TC 76th, while for Iona Nadine Donegan of Tullamore Harriers was 56th. Providence finished third team and Iona sixth.

In the men’s race, Abdel Laadjel of Donore Harriers was 27th and David McGlynn of Waterford AC 105th for Providence, with the team finishing fourth.

Bethlehem, Pennsylvania was the venue for the Mid-Atlantic Championships, where Charlie O’Donovan of Leevale AC finished 14th for Villanova in the men’s race and Laura Nicholson for Bandon AC 83rd of the women.

The top two teams in each regional championships qualify for the NCAA Championships.

One of our running community needs your help

Calm before the Euro-Cross storm?