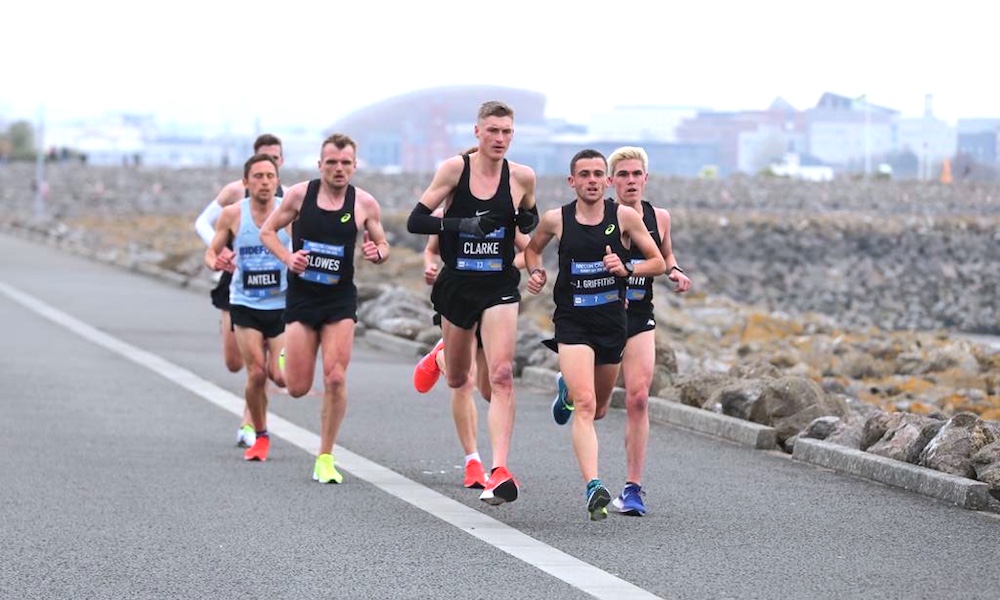 Charlotte Arter and Adam Clarke won the titles in Cardiff, while there were fast times at the Conwy Marathon, the Braintree 5M, the Alloa Half Marathon, the Orion 15 and lots more!

Find out all about how GB teams did on the superb Aarhus course in Denmark at the World Cross Country Championships with the full report here.

GB international and Cardiff AAC’s Arter was targeting Angela Tooby’s 35 year-old Welsh record at the Brecon Carreg Cardiff Bay Run, and although the parkrun record holder was on course at halfway in 16.07 the strong headwinds slowed her progress on Sunday (March 31).

Nonetheless the Welsh half marathon record holder still won in style in 32:39 from Belgium international Nina Lauwaert, who ran 33:05. Ever improving Clara Evans sliced a big chunk off her personal best to take third in 33:26.

“It’s brilliant to get the win, especially racing on the streets of Cardiff. The conditions were tough in those last two miles but I’m delighted to get the win,” said Arter. “I was hoping to run a PB and I knew if I did that I would have got the record. I was on pace at the halfway mark and I was feeling good but the wind made it tough and in the end I just wanted to make sure I finished strong to get the win.

“The year has started really well, I want to keep on building momentum now, I’m heading off to America next week for a few races and an altitude camp. My main aim is to hit the 10,000m hard in May, but I just have to keep on enjoying it and keep working hard.”

The late withdrawal of Dewi Griffiths due to illness meant the men’s race was wide open, and was ultimately won by Aldershot, Farnham & District’s Adam Clarke in a big PB of 29:28. Clarke beat off classy competition from Matt Clowes (who unfortunately had to withdraw at 9k with a hamstring injury), Jake Smith, Josh Griffiths and Ieuan Thomas.

Cardiff AAC’s Smith was second just five seconds behind Clarke in 29:33, while Griffiths took third in 29:34. An impressive six men ran under 30 minutes in less than ideal weather.

More than 6000 runners took part in this popular event, which also incorporated the Welsh 10k Championships. Swansea Harrier Griffiths took gold ahead of Thomas, who finished in 29:35. Cardiff AAC’s Ciaran Lewis took bronze with an absolutely superb run as he broke his PB by five minutes to run 29:48!

Conditions were just as tough but for a different reason at the Orion 15 (March 30) when runners took on the classic cross country endurance event in North London.

Hercules Wimbledon’s Richard McDowell took the men’s win in 91:27 while Trent Park’s Emily Jeanes was the women’s victor in 1:55:32.

Victoria Park Harriers’ Josselin Polini and Daniel Steel were the two men’s runners up in 95:30 and 96:24 respectively.

Carla Brown returned to the race she always excels at to take the women’s second prize in 1:56:50, ahead of Serpentine’s Sarah Pemberton’s 1:59:38.

The Conwy Marathon saw victory for the formidably brilliant Andrea Rowlands of Eryri Harriers, the V40 taking yet another win in 3:11:21 (March 31).

It was a competitive race for the title with Miranda Frudd just holding off Kirkby’s Jennifer Houghton by two seconds! Frudd ran 3:15:20 to Houghton’s 3:15:22.

Dropping down in distance to the Braintree 5M in Essex, Havering’s James Connor took the men’s title while Springfield Striders’ Liz Davies was the women’s victor (March 31).

Connor won in a fast 25:05 from Ware Joggers’ Michael Waddington’s 26:00 with Billericay Striders’ V40 Crispian Bloomfield finishing quickly behind in 26:04.

Davies’ winning time was 27:50, a superb result for the V35 and more than two minutes clear of her nearest rival. Witham RC’s Rachel Sweatt took second in 29:59 while Lindsey Colman was third in 30:36 – great racing!

The Alloa Half Marathon saw some really classy performances on Sunday (March 31) with Kevin Wood and Morag Millar recording some elite level times.

The Bedford Autodrome Running Grand Prix Series hosted a marathon, a 20M, a half and a 10k and 5k too on Sunday (March 31)!

International athletes Marc Scott and Hayley Carruthers were the fastest at UK parkrun this weekend (March 30) with Scott running 14:34 at Darlington South while Carruthers ran 16:20 at Brueton parkrun.

Check out the full top 10 here.