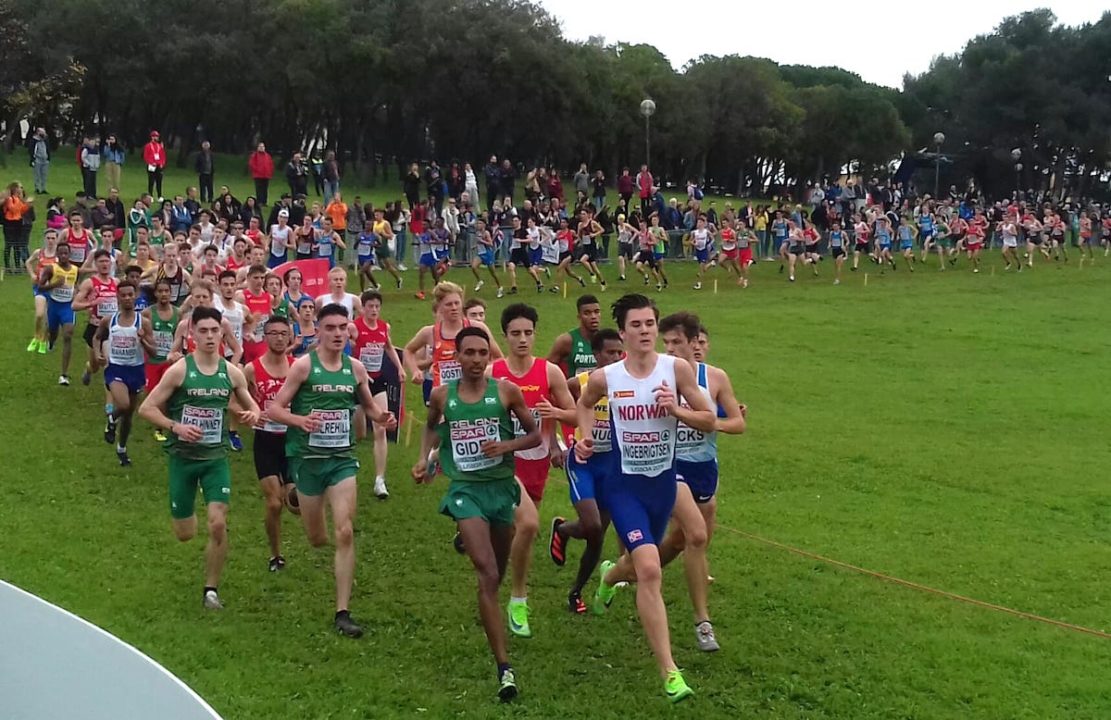 With a two individual and two team medals, the large Irish squad had plenty to celebrate after the European Cross-Country Championships on a tough, hilly course in Lisbon, Portugal on Sunday (December 8).

First up was Efrem Gidey, a refugee from Eritrea, who was making his Irish team debut in the men’s U20 category. Gidey ran a mature race and, despite a dip mid race when he fell back to seventh place, recovered quickly to finished third behind the Norwegian Jakob Ingebrigtsten who was taking his fourth title in this age group. In a closely fought team race, the Irish only lost out on the bronze medal to host nation Portugal on countback.

Next to win medals were the U23 women, with Stephanie Cotter finishing third, Eilish Flanagan ninth and Roisin Flanagan 17th and the team taking silver. All three are students at Adams State college in Colorado and took the top three places at the NCAA second division championships last month.

Last on the schedule were the senior women, with hopes high that Fionnuala McCormack, in her 16th appearance at these championships, could snatch a medal. It was not to be with the Kenyan-born Yasmin Can winning the race for a fourth year ahead of a battling Karolina Grøvdal of Norway – the true queen of European cross-country at the moment.

McCormack ran a typically battling race moving into third place around halfway through but was passed on the final lap by Samrawit Mengsteab of Sweden, who like Efrem Gidey, was born in Eritrea. It was a fourth time McCormack, who won the race in both 2011 and 2012, had finished just outside the medals.

Behind her, track specialist Ciara Mageean was as high as 11th at one point, but it was Aoibhe Richardson, another Irish athlete benefitting hugely from the American collegiate system, who finished second of the Irish in 17th place. Behind her Mageean collapsed over the line in 20th place ensuring team silver for a battling Irish team by just two points.

In the men’s senior race, Sean Tobin, who had finished tenth a year earlier but is recovering from injury, led the Irish team home in 18th place. Looking ahead to Dublin 2020

McCormack’s post race interview summed up the day for the Irish, who will host next year’s championships in Dublin.

“It’s difficult because I’ve come fourth so many times before and it’s very painful to be honest. But we got a team medal today, and that’s good,” she said.

“We had a very successful team championships this year. I don’t think we’ve ever won this many medals as a group before and, going into Dublin next year, that’s promising. It will be a big year for us next year – the last time the championships was held in Ireland ten years ago, we had quite high expectations for our team. It didn’t really come off so, hopefully next year, we can spread the pressure between all of us and be successful.”

Reflecting on her own performance, she said: “The course was brilliant, the crowd were great – it’s what cross country is meant be. The only thing I didn’t like was my position. I love running, and I really like competing and it’s easier when you stand on the podium. Having done that before, I know what it feels like, so I keep trying to do it again.

“Being fourth isn’t that far away, and every time I convince myself that this year will be my year. I moved up to the marathon, but I never really moved away from cross country, so it’s nice to be able to be here, and be competitive and not just be making up the numbers because it’s my 16th time.”

Yared Derese of Carrick Aces AC moved up a distance to win the Waterford Half Marathon on Saturday (December 7).

In a quality race, Derese finished in 64 mins 13 secs – over a minute clear of Mick Clohisey of Raheny Shamrock who was second in 65:23. Third in 67:48 was Eric Keogh of Donore Harriers, while fourth in 69:36 was David Mansfield of Clonmel AC.

First woman was Ruth Fitzgerald of host club Waterford AC in 80 minutes exactly. Fiona Kehoe of Kilmore AC was second in 81:38 and Jackie Carty, also Kilmore AC, third in 82.58. A total of 2,226 completed the race.

At the Jingle Bells 5km in Dublin’s Phoenix Park, Hiko Tonosa of Dundrum South Dublin AC beat his clubmate Emmett Jennings with Tonosa finishing in 14 mins 16 secs and Jennings just two seconds adrift for second. Third in 14:24 was Andrew Coscoran of Star of the Sea AC, while for fourth placed was Pierre Murchan of Dublin City Harriers out-sprinted Evan Byrne of Togher AC with the pair both timed at 14:28.

As a mark of respect to the late Irwin Spiers, Saturday’s Mighty Oaks cross-country in Cookstown, organised by Acorns AC, was postponed until a later date.