Calm before the Euro-Cross storm? 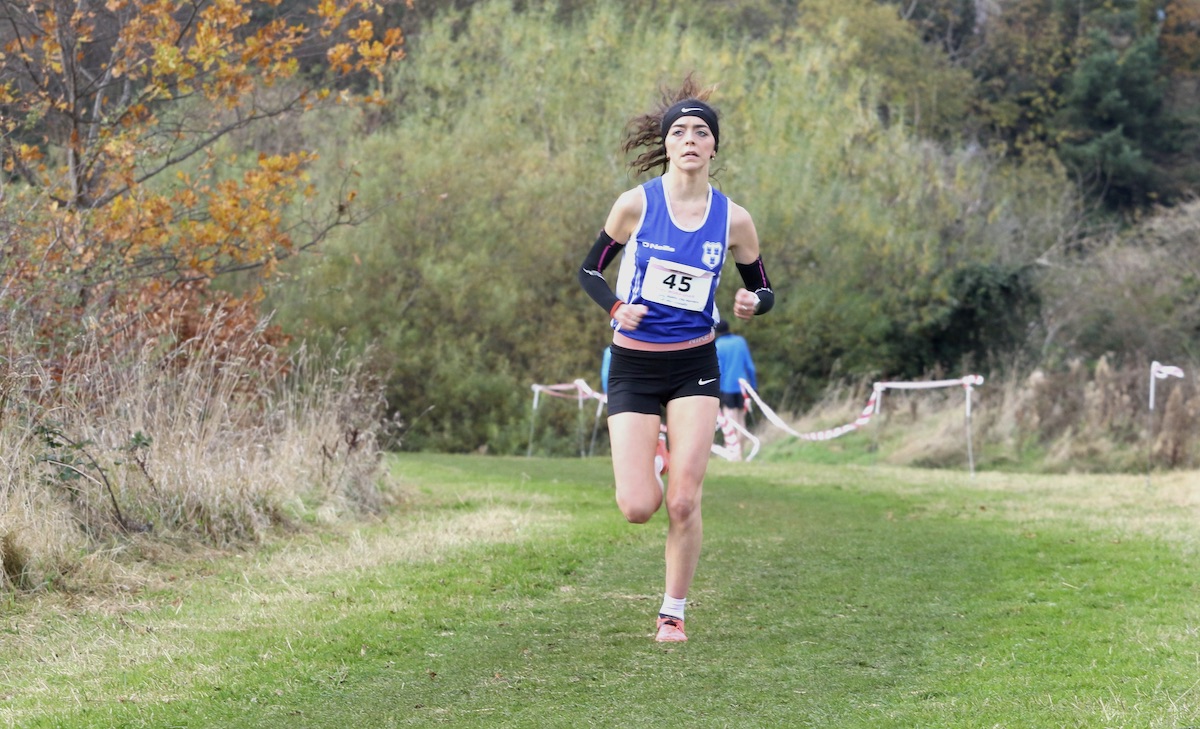 With not long until the European Cross-Country Champs, the action is hotting up in the muddy stuff, with road, trails and hill action too brought to you by Lindie Naughton.

Rebecca Rossiter, of Loughview AC aged just 17, warmed up for the European Cross-Country Championships in less than a fortnight’s time when she won the women’s three-mile race at the Malcom Cup promotion hosted by Annadale Striders at the Queen’s Playing Fields, Belfast, on Sunday (November 17).

Rossiter ran a canny race, tucking behind the vastly experienced Kerry O’Flaherty of Newcastle and District AC in the early stages of the race. Only on the final laps did she make her move, taking over in front and opening up a half minute lead on her way to victory.

Rossiter, clearly a talent to watch, will compete as part of the Irish U20 team at Abbotstown after finishing third in the trial race at Santry just over a week ago.

Third in the Belfast race was Sarah Lavery of Beechmount Harriers.

With three in the top six, Newcastle and District were the winning team. Armagh AC, led by Danielle Fagan in fifth place, finished second and Beechmount Harriers third of the fifteen teams entered.

As for the men, Eskander Turki not only won the men’s four-mile race in a determined fashion but also led host club Annadale Striders to team victory over arch-rivals North Belfast Harriers.

The event was the fifth round of this season’s Northern Ireland Cross-Country League with four rounds to go.

With Edel Monaghan first and Silje Lindstad second, Dublin City Harriers were comfortable winners of the women’s team title at the Dublin Intermediate Cross-County Championships on a crisp, November afternoon (Sunday November 28) in Tymon Park, with underfoot conditions as good as they can get at this time of year.

Making up the winning team were Ellen Byrne sixth and Aoife Corr ninth. Finishing third behind the two DCH women was Sorcha Loughnane of Donore Harriers, while fourth was Sinead McDonald of Liffey Valley AC. In the men’s race, the battle from the start was between Tallaght AC and Raheny Shamrock AC who between them shared the top five places. On the final lap Tallaght’s Brishan O’Brien out-sprinted Dylan O’Brien from Raheny for the individual win, with his brother Josh O’Brien finishing third. Raheny pair Robert Frewen and Graham O’Dwyer took up the next two places and with Brian Sexton in eleventh place ensured a comfortable team the victory for the Northside club.

As at the Dublin Novice Championships in October, Tallaght AC was second and Donore Harriers third.

Fast and furious over 4km

Martina Kiely of St Finbarr’s AC was the winner of the women’s race at the Munster Masters Cross-Country Championships in Clarecastle, Co Clare, also on Sunday.

St Finbarr’s AC were first in the over 35 team category ahead of Ennis Track Club, with Cork the first county ahead of Clare. Kilmurray/Ibrickane/North Clare AC was the only W50 team entered, although Kerry took the county title in this age group, beating Cork and Clare.

East Cork’s in-form Michael Harty was a clear winner of the men’s race in 23 mins 17 secs. John Kinsella of Bilboa AC was second in 23:31 and John Fitzgibbon of Thurles Crokes third in 24:20.

Runners of all standards came from all over Ireland for the Clonakilty Waterfront Marathon, Half Marathon and 10km held on Saturday (November 27) in Co Cork.

Alexander Wallace of the St Coca’s club in Co Kildare was the winner of the marathon in a time of 2 hrs 32 mins. First woman was Tara Malone of 1Zero1 in 3:11.55.

A total of 418 completed the marathon, along with thirty-six early starters. Among those was wheelchair racer extraordinaire Jerry Forde, and Dave Brady of Raheny Shamrock AC, whose ambition to run a thousand marathons by the time he reached his 70th birthday was sidetracked by the widespread cancellation of racing over the past 20 months. The good news is that he’s now almost there!

Leading home close to a thousand finishers in the half marathon was Tudor Moldovan of Clonliffe Harriers in 71 mins 20 secs. Niall Sheil of St Killian’s AC was second and first M40 in 76:28 and Kevin Gilleece of Kilfinane AC in Co Clare third in 77: 01. Niamh Cronin of St Finbarr’s AC was the first woman and first W40 in 89:23, followed by Aoife Mahony of Eagle AC in 90:26 and Selena Nolan of Ennis TC in 91:27.

Kieran McKeown of Watergrasshill AC was the winner of the 10km in 34 mins 45 secs, followed by Conor O’Leary in 35:44 and the great Catherina McKiernan, who was also first woman in 37:20.

A total of 1,378 finished the Clontarf Half Marathon in Dublin, also on Saturday, where Andrew O’Neill was first home in 76 min 6 secs. First woman was Leanne Butler of Kilkenny City Harriers in 87:43. In the associated five-mile run, Christian Vilchez Ceballos was the winner in 28 mins 17 secs, with Edel Gaffney of Trim AC sixth overall and first woman in 29:50.

Blast from the past for victory

Alan O’Shea, winner of the Cork City Marathon back in 2007 and out of action for some time, returned to racing in style to equal his own course record at the Great Glenville 4-Mile Run on Sunday (November 28), writes John Walshe.

The Bantry man, who was 41 in September, finished in 19:40, the same time as he had run four years ago. Out on his own from the start, he reached three miles in14:27 but slowed in the closing stages. O’Shea’s last road race was in Fermoy back in July although he had recorded a 15:19 parkrun time in Ballincollig a week ago.

Denis Hegarty of the promoting Watergrasshill club was second in 20:16 with the ever-consistent John Meade of St Finbarr’s AC third in 20:28.

The first two places in the women’s race went to runners outside of Cork with Sharon Rynne from Kilmurry-Ibrickane North Clare AC taking the honours in a time of 23:34. Kealy Tideswell of Clonmel AC finished second in 24:16 while Linda O’Sullivan – second over 10 miles in Kilmeaden the week before – gave the home club further cause for celebration when taking third in 24:29. O’Sullivan, now in the over 50 category, had a similar placing when the race last took place in 2019 although she was twenty-five seconds quicker this time.

The much-travelled Watergrasshill AC were well rewarded for their efforts with a fine turnout of over 350 runners for what was another well-organised event held in rather cold and damp conditions.

In Co Galway, Hugh McArdle of Roscommon Harriers was the winner of Ballinderreen 10km on Sunday in a time of 32 mins 58 secs. Enda Marren of Piranha Tri Club was second in 33:22and Gary Higgins third in 34.10. All three were in the M40 age group.

More significantly, in the women’s race the top nine were all over forty – and eight of them came from the Galway City Harriers club. Are master athletes taking over road racing?

Leading them home was Grainne Ní Uallacháin in 37:50. Her GCH clubmates Neasa De Burca and Clare Rowe were second and third.

Races for seniors, juniors and juveniles were held over two days at the Kilmac Trail Running Festival held in Kilmacanogue, Co Wicklow.

Winning the 30km Five Tops and a Drop run from Kilmacanogue to Djouce in 3 hrs 10 mins 48 secs was Adrian Hennessy of Kilfinane AC.

Senior winners were Rian Mac Maolain of Sli Cualann AC in 27:51 and Laura Ivers of Parnell AC in 30:50.

Winning the women’s 7km night challenge around the Sugarloaf mountain on Friday evening was Grace O’Rourke of Dundrum South Dublin AC in 38 mins 17 secs. Kathryn Barr of UCD Orienteers was second in 38:33 and Emer Finlay third in 39:47